Above: Obstructionist, RINO Senate Leader Mitch McConnell and his protector wife, Transportation Secretary Elaine Chow, who also is a member of the Council on Foreign Relations.

There are many issues that are considered top priorities in President Trump’s agenda to MAGA, but none greater than being able to move on with necessary legislation and especially now to have confirmations on appointments completed in a timely fashion.

One of his greatest priorities is his Supreme Court appointment that has received absurd protestations, way before he even announced a candidate.

Truly a deep state RINO, Mitch McConnell obviously is following the dictates of the Deep State, otherwise known as The Council on Foreign Relations, of which his wife, who is also Secretary of Transportation, Elain Chow, is a member. McConnell may as well be outed as a card-carrying, rabid, far left Democrat, no matter what ruse he puts on.

WHY ‘PUT IT IN THE DITCH, MITCH’ MUST GO:

“The opportunity to transform the American judiciary toward freedom and away from tyranny won’t last forever. It’s hard enough for the president to fight intransigent Democrats who are opposing him every step of the way. He now finds that he must fight Republican Senator Mitch McConnell as well.” – Bob Adelmann, TheNewAmerican.com

A prime example of why Mitch needs to go ASAP is his handling of President Trump’s $60 billion in federal spending rescissions last April when he instead pushed through a mammoth budget-busting $1.3 trillion spending bill.

Steve Byas of The New American.com cited “House Speaker Paul Ryan (R-Wis.) was also quite pleased with the bill. ‘The House just voted to rebuild our military, secure our borders, and give our service members their largest pay raise in eight years.’ But it was the Democrats — the people McConnell had “brokered” a deal with — who appeared to be most pleased with the spending bill. 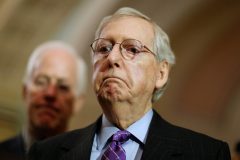 “Congressman John Yarmuth (D-Ky.) summed up what the Democrats thought about the bill. ‘We got about 80 percent of what we were trying to get.’

“Most Republicans, on the other hand, except for their leadership, have expressed disgust. Rep. Mo Brooks (R-Ala.) said, ‘This year we’re looking at a deficit of $750 billion to $1 trillion. Next year, the estimate is $1 trillion or more. I have to wonder if there is any way that we can avoid a national insolvency or bankruptcy.’

“Yet, McConnell appears more concerned with good relations with the minority party Democrats than he does with his relationship with members of his own party or the president in the White House — also of his own party. Which helps explain why the Republicans are technically in the majority in the House and Senate, but the minority Democrats get 80 percent of what they want.”

The Dimms long ago set precedent via their hotshot former Senate Leader Harry Reid, in 2013 by changing the vote for confirmation of Supreme Court Justices to a majority rule vote of 51%. However, these days it seems the Dimms don’t need precedent for anything. They are such obstructionists they will not stop at anything for their conquests. While the Republicans opine the need to uphold tradition and gentlemanly agreements.

Paul Kane writing for the Washington Post also back in 2013 in his article “Reid, Democrats trigger ‘nuclear’ option; eliminate most filibusters on nominees: “Democrats used a rare parliamentary move to change the rules so that federal judicial nominees and executive-office appointments can advance to confirmation votes by a simple majority of Senators, rather than the 60-vote supermajority that has been the standard for nearly four decades.

“The immediate rationale for the move was to allow the confirmation of three picks by President Obama to the U.S. Court of Appeals for the District of Columbia Circuit — the most recent examples of what Democrats have long considered unreasonably partisan obstruction by Republicans.

“In the long term, the rule change represents a substantial power shift in a chamber that for more than two centuries has prided itself on affording more rights to the minority party than any other legislative body in the world. Now, a president whose party holds the majority in the Senate is virtually assured of having his nominees approved, with far less opportunity for political obstruction.”

So GOP Senators, now is the time for you to stand up and show us if you are authentic party platform breathing, Constitutional Republicans or deep state RINOs like McConnell who are out to undermine President Trump at any opportunity. Judge Brett Kavanaugh needs to be confirmed as early as possible so the Senate can move on to other important priorities for American citizens so we can collectively make America greater.

There is no time to lose in the Senate and much on the line for the upcoming November elections. The Senate must be in sync with President Trump’s agenda and it is doubtful to happen on two-faced Mitch’s watch which seems apparent given his history.

TOP 3 PRIORITIES FOR PRESIDENT TRUMP AS I SEE IT

Top priority: Get the Senate to oust McConnell, replace him with a real Republican like Rand Paul or Mike Lee.

Priority number 2: Get the House to do the same with Ryan and replace him with Jim Jordan or Mark Meadows. Once Trump has the support of Congress he can deal with Priority number 3 quite easily.

Priority number 3: THE PRIZE – Fire the entire Dept. of Justice (DOJ) hierarchy Sessions, Rosenstein and Mueller and their FBI cohort Wray. I especially relish the vision of doing it with a flourish by sending the Marshall Service or better yet the Marines in and taking them out in cuffs since there are plenty of charges to accompany the action and then carry out truckloads of all the documents that have been requested by house committees and refused, even under subpoenas. 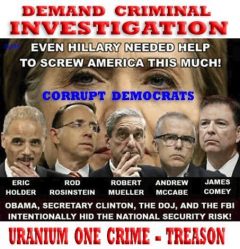 Confirmations for their replacements could be quite expedient in the Senate and prosecuting them could also be a lot easier in the House with ‘team’ leaders in both houses instead of the deep state obstructionist ‘Never Trumper’ team of McConnell/Ryan.

American patriots are so disgusted with our broken justice system that is clearly two-sided today, this action should be a great boost in the mid-term elections to any American that is paying attention to reality and understands what America is genuinely about.

Of course, the big payoff at DOJ would come in the prosecutions of all the players in the Russiagate fiasco, and a seemingly endless row of Teflon Democrats such as the Clintons, Obama, Eric Holder, Lois Lerner, Loretta Lynch, Timothy Geithner, Jack Lew, Susan Rice, Samantha Power, Thomas Perez, Huma Abedin and Debbie Wasserman Shultz. See a list of their transgressions in the article Travesty or Justice?

MAKING IT ALL HAPPEN

Again, the kingpin action to focus on in making this all happen is booting the deep state’s ‘cork in the bottle’ McConnell out the door. That will take some serious organizing and strong pressures on Senate members to get ‘er done. This will be particularly difficult in light of the fact that so many Senators are avowed RINOs. But, this effort needs to be organized and pushed with heavy pressures and the strongest of priorities on all GOP Senators. It is the key to the other two priorities.

Accomplishing this top priority could light the fuse for the same treatment immediately for Ryan in the House. The House recognizes the need to boot RINO Ryan sooner than his desired time frame but hasn’t made it their top priority yet.

Accomplishing these three priorities would create a panacea to build from for making and keeping America greater.

However, it is just too much to expect in a patriots idea of a perfect world, but wouldn’t it be great if fake news media owners and their many lying and propagandist employees were held to truth standards that hold them responsible for their intentional crimes of false information, defamation of character and outright treason with reports that harm America. A man can dream, I suppose.