— Published with Permission of The John Birch Society —

SPOKANE — The agenda and many of the schemes of the now-infamous “Deep State” were exposed to a wide audience over the weekend at the Red Pill Expo in Spokane, Washington. Among other presentations, leading experts from across the country highlighted the hidden dangers of vaccines, the assault on gun rights, the climate-change fraud, the plan to undermine private property, the infiltration of Congress by communists, the indoctrination of America’s youth at universities, the Deep State’s stoking of racial division, the catastrophe facing South African minorities, the destruction of the U.S. Constitution, and much more. Obviously, far-left groups such as the Southern Poverty Law Center were not happy.

At the conference, which brought together dozens of experts across multiple fields, about 500 attendees from all over America and beyond enjoyed a packed two-day schedule offering all sorts of “red pills.” The term “red pill” comes from the hit 1999 movie The Matrix. “This is your last chance. After this there is no turning back,” explains Morpheus, one of the main characters, while speaking to Neo, another star in the film. “You take the blue pill: the story ends, you wake up in your bed and believe whatever you want to believe. You take the red pill: you stay in Wonderland and I show you how deep the rabbit hole goes.” Since the film, the term “red pill” has become a phrase indicating something that wakes a person up from their ignorance.

And there were red pills aplenty at the event, including many offered by high-profile speakers. One of the keynote talks was delivered by Robert Kiyosaki, best known as the author of Rich Dad Poor Dad, the number-one best-selling personal-finance book of all time. In his talk, Kiyosaki explained that the schools are not teaching children what they need to know about money. He also pointed out that the Federal Reserve System is ripping off the American public. In a follow-up interview with The New American, Kiyosaki warned that severe economic turbulence may be coming, and that the public should prepare accordingly.

Another leading speaker was Lord Christopher Monckton, the colorful Third Viscount Monckton of Brenchley who also served as policy advisor to Prime Minister Margaret Thatcher. Monckton gave a technical talk outlining new findings on climate change that fully discredit the United Nations’ global-warming alarmism. Monckton has become a leading critic of the man-made global-warming theory, and said the latest scientific paper he helped co-write would demolish the UN’s agenda. Ahead of his talk, he asked for a recording of it so that it could be sent to the relevant people at the UN.

Also speaking was Del Bigtree, the producer of the hit documentary Vaxxed: From Cover-up to Catastrophe. In his powerful speech, which more than a few attendees said was among the most important of the whole Expo, Bigtree exposed a number of significant health concerns surrounding the growing tsunami of vaccines forced on children. He also drew attention to the fact that vaccine manufacturers successfully lobbied to make themselves immune from liability when their mandatory products kill and injure people, something that is practically unprecedented in the history of free nations. Based on testimony of whistleblowers and other evidence, he suggested the health risks of vaccines — including the surge in autism — was a very real threat.

Other speakers included Tom DeWeese of the American Policy Center, who highlighted the establishment’s war on property rights; Gun Owners of America Executive Director Emeritus Larry Pratt, who explained the threat to constitutionally protected gun rights; Major General Paul Vallely, U.S. Army (Retired), who spoke on national-security issues; author and researcher Trevor Loudon, who exposed communists within Congress and the federal government; and university professor and K-12 FreedomProject Academy chief Dr. Duke Pesta, who exposed the insanity taking place on college campuses. This writer spoke about the Deep State and, more importantly, the Deep State behind the Deep State. The constitutionalist John Birch Society had a booth at the event where a variety of products on the Deep State, including a Special Issue by this magazine and a DVD exposing it, were selling quickly.

Southern California journalist and activist Gary Gileno; John Hewlett, founder of Evolution Nutraceuticals; AmaBhulu author Dr. Harry Booyens, an aerospace and defense physicist who documented the real history of South Africa; Jim Lee, founder of ClimateViewer; Twila Braise, president of the Citizens’ Council for Health Freedom; and former Congresswoman Cynthia McKinney (D-Ga.), the first black woman elected to represent Georgia in the U.S. House who has since become a whistleblower on what she describes as the phony “left-right paradigm.”

In the coming days and weeks, The New American will be featuring exclusive video interviews with many of the speakers at the Red Pill Expo.

One of the most exciting highlights of the conference for attendees was the world premier of the film LAVOY: Dead Man Talking. Produced by the Center for Self-Governance (not to be confused with the pro-Constitutional Convention group), the movie told the tragic tale about the murder of Arizona rancher and dedicated patriot LaVoy Finicum by federal and state officials in early 2016. After the premier, Finicum’s widow, Jeanette, spoke to the crowd, more than a few of whom struggled to hold back the tears. The Finicums raised 12 children of their own and served as foster parents to over 60 boys over a period of two decades. LaVoy’s greatest quality, said his widow, was how he “loved being a father.”

The Master of Ceremonies for the Expo was Washington Representative Matt Shea, the enormously popular Republican lawmaker representing the Spokane area for the last decade who was made GOP Caucus Chair last year. Representative Shea, who is nationally recognized for his devotion to liberty and the Constitution, was another one of the conference highlights. The event chairman was radio host Dan Happel, a former county commissioner and a leading liberty activist. Also playing a key role in organizing it all were Debbie Bacigalupi, a rancher and nationally known speaker on Agenda 21, as well as Patrick Wood, a prominent author and speaker on technocracy and globalization. Both were involved in organizing last year’s Red Pill Expo in Bozeman, Montana.

Unsurprisingly, the local newspaper the Spokesman-Review, founded by a member of the Deep State secret society Skull and Bones, put out a nasty front-page hit-piece about RPE on the first day of the conference. Among those smeared was this writer. Citing the discredited Southern Poverty Law Center, widely described as an anti-Christian hate group by critics, the paper falsely claimed that a book co-written with the late Dr. Samuel Blumenfeld accused teachers of committing treason. In fact, this writer and Dr. Blumenfeld have both said repeatedly in the book and in hundreds of radio and TV interviews that teachers are just as much victims of the education establishment as students. The paper issued a clarification the next day correcting the record.

Despite including speakers and attendees from all races and backgrounds, the SPLC also was quoted claiming the event promoted “alt-right” theories. The spokesman for the far-left extremist group claimed speakers at RPE were “far-right extremists.” But in reality, there were speakers from across the political spectrum, ranging from Robert Kyosaki who has repeatedly emphasized that he has no political ideology, to Cynthia McKinney, who served as a liberal Democrat in Congress before joining the Green Party. As such, the SPLC was either speaking in ignorance, or deliberately lying. The newspaper did not bother to point that out for reasons that were not immediately clear. 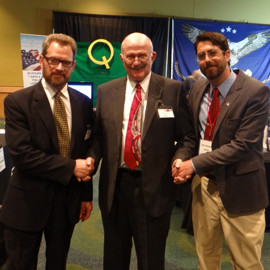 Even more absurd was the SPLC’s smear of nationally renowned author and speaker Pat Wood, whom the far-left attack group claimed was “followed by anti-government activists and anti-Semitic white supremacist groups.” “This is pure fantasy,” Wood told The New American. “In fact, a group of anti-Semites tried to sneak into the Expo to disrupt, and after confronting them directly, they were denied entrance.” The SPLC has “lost all credibility and is classified by many as a hate group itself,” Wood explained, expressing concern that some “mainstream” media outlets continue to cite the group as a source of information.

Ironically, just days before the Red Pill Expo began, the SPLC was forced to apologize and give millions of dollars to a prominent Muslim it smeared as an “anti-Muslim extremist.” Seriously. But that is standard operating procedure for the SPLC. In fact, the same SPLC spokesman who smeared the Expo and some of its speakers, former AP “reporter” Ryan Lenz, was ridiculed last year after exposing the supposed existence of a vast “anti-Indian movement” that promotes “equality.” What he did not mention was that the “matriarch” of the movement, as Lenz labeled Elaine Willman, who spoke at last year’s RPE, is actually a Cherokee Indian married to a direct descendant of Sacajawea. In his supposed exposé, Lenz also promoted racist stereotypes about Indians, even referring to them as “weak.”

Of course, those lies and smears only scratch the surface of the SPLC’s record of dishonesty and extremism. But when confronted about quoting the radical group in its paper, the newspaper editor told this writer that the goal was simply to provide some “balance” to the story. He also said pointing out the SPLC’s track record, and the widespread accusations that the group promotes bigotry, bias, and dishonesty against those it disagrees with, would have required too much space to be practical. In journalism school, though, students are taught that the bias of a source should generally be pointed out to readers in a neutral, fair way. And the SPLC’s record is clear.

Author and speaker G. Edward Griffin, a key figure in the liberty movement and the founder of Freedom Force International that created the conference, considered the event a great success. “The Red Pill Expo-2018 featured an unprecedented unmasking of the Deep State that we believe will provide a clear understanding of the growing threats to liberty, not only in America, but around the world,” he told The New American. “By bringing together speakers from different walks of life — different political views, backgrounds, experiences — we proved that unity in truth and liberty is not only desirable but possible. While the Deep State is trying to divide us, we are creating unity. Our goal now is to build on our tremendous success at the Expo and encourage ever larger numbers of those who know that something is wrong in our world to take the ‘red pill’ and join with us in this epic undertaking.”

The date and location of next year’s RPE has not yet been determined.