TAKE HIM TO THE DOOR!

If you saw the movie “Oh Brother, Where Art Thou,” you will remember the scene in this photo where the character Homer Stokes (an underhanded scheming gubernatorial candidate) after accidentally revealing he actually belonged to a secret society (the KKK), so sickened town hall attendees that a group of men came into the hall with a pole on their shoulders that others hoisted Stokes onto and he was taken to the door and dispatched in humiliation outdoors.

If the Senate version of the tax bill becomes irreconcilable with the house version I figuratively see, and realistically wish to see, such a scene as described above as fitting for Senate Leader Mitch McConnell followed up with a severe drubbing by voters in the next election removing the many spurious members that are dyed in the wool RINOs who are also Never Trumpers being replaced with serious Republicans who follow their great Republican Party Platform and their oaths to our extremely successful Constitution.

McConnell may as well have had a deep moat type ditch dug around the Senate or something like a huge firewall created that stops any prospective worthwhile and lasting house bills from entering the Senate. He is an establishment obstructionist from the get-go as is obvious from the fact that he has not brought to the floor over 300 bills the House has passed this last year.

“Not only have fewer than half of President Trump’s judicial nominees been confirmed by the Senate (the lowest number in the last four administrations), but cloture has been invoked an astonishing 51 times even to get those to the Senate floor for a vote. There were no cloture votes under Bush I and just six during the Clinton administration. Under Obama there were five over eight years.

“At the moment there are 175 pending nominees waiting for action from Senate committees while another 101 are waiting for a confirmation vote by the full Senate. And the logjam isn’t created by just the Democrats, either. Senate Minority Leader Charles Schumer has been fighting to slow down the confirmation by requiring that the Senate invoke “cloture” — i.e., the “nuclear option” whereby just 51 senators can shut off filibusters — which then sets in motion the “30-hour” rule. That rule limits debate on any nominee to 30 hours, with no senator being allowed to speak for more than one hour.

“This has been successful in slowing the confirmation process to a virtual crawl: only two or three nominees are being confirmed every week. For example, it took two months for the nomination of a non-controversial judge, David Nye, to reach the Senate floor for a vote. When it finally got there, the Senate voted for his confirmation to the U.S. District Court for the District of Idaho, 100-0. If that pace is maintained it will take years for the Senate to complete the task.

“The other reason for the delay in getting Trump’s nominees vetted and confirmed is, as noted above, Senate Majority Leader Mitch McConnell (R-Ky.). He is limiting the Senate from considering them by cutting its hours. This has so outraged conservative leaders that 133 of them wrote McConnell directly complaining that “the slow pace of Senate confirmations is exacerbated by the Senate’s continued insistence on working no more than 2½ days a week: arriving on Monday evening for a handful of votes, and departing, on average, by 2:30 pm each Thursday afternoon.”

“The opportunity to transform the American judiciary toward freedom and away from tyranny won’t last forever. It’s hard enough for the president to fight intransigent Democrats who are opposing him every step of the way. He now finds that he must fight Republican Senator Mitch McConnell as well.” – Bob Adelmann, TheNewAmerican.com

If all that isn’t bad enough, recently McConnell’s efforts to effectively kill President Trump’s leading campaign promise of reducing our corporate tax from 35% to 15%, was to create the postponement of his new 20% rate till the year 2019!

Three new analyses of the Senate’s Tax Cuts and Jobs Act all delivered bad news for Republican leaders. See: ‘The GOP tax plan got a triple whammy of brutal reviews,’ by Bob Bryan at businessinsider.com.

And it’s amazing isn’t it, that after so many bills made it to Obama’s desk for repealing ObamaCare that not one of those bills has appeared on President Trump’s desk in over a year. However, a meager last-minute offer to repeal the ObamaCare mandate appeared in Mitch’s recent version of his Senate tax bill, which is obviously not to be taken seriously coming from him. It is probably to be a bargaining chip to be sacrificed for getting his way on something more important to the establishment. After all the blocking of anything ObamaCarish (my word) do you really think he is going to just out of nowhere offer this pearl up? Give us a break.

Paul Ryan’s House bill appears to be good enough for President Trump’s approval, understanding that it is probably just entirely too much to expect a house full of so many extremely progressive democrats and GOP RINOs, many of whom are Never Trumpers, to create the bill we would prefer. But McConnell’s Senate version is not only diametrically unreasonable but with so few votes to be had (51) thanks to the greed of, former senator GOP leader Harry Reid, he only needs a couple of his pet few to oppose the Senate bill for various sundry reasons, i.e. John McCain and Jeff Flake AZ, Susan Collins MN, Bob Corker TN, Todd Young IN, James Lankford OK, Lindsay Graham SC and Lisa Murkowski AK.

Both Paul Ryan and Mitch McConnell are seasoned professionals who knowledgeably command their domains and have developed into masters of obfuscation at the behest of the establishment AKA, The Council on Foreign Relations (CFR).

WHO THE CFR IS: 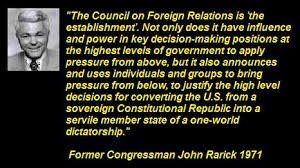 “The Council on Foreign Relations controls our government. Through the years its members have infiltrated the entire executive branch, State Department, Justice Department, CIA, and top ranks of the military. Every director of the Central Intelligence Agency has been a member of the CFR. Most U.S. Presidents since Roosevelt have been members. The members of the CFR dominate ownership of the press and most, if not all, of America’s top journalists are members. The CFR does not conform to government policy. The government conforms to CFR policy.” — Bill Cooper in “Behold A Pale Horse”

“In short, the “house of world order” will have to be built from the bottom up…. An end run around national sovereignty, eroding it piece by piece, will accomplish much more than the old-fashioned frontal assault. 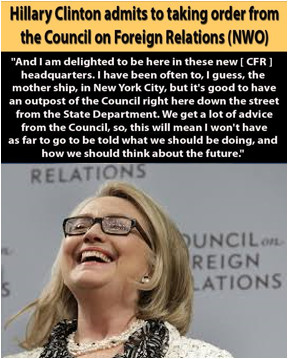 “As for the programmed decline of the American economy, CFR member Samuel Huntington argues that, if higher education is considered to be desirable for the general population, “a program is then necessary to lower the job expectations of those who receive a college education.” CFR member Paul Volcker, former Chairman of the Federal Reserve, says: “The standard of living of the average American has to decline… I don’t think you can escape that.”

“It is through this front group, called the Council on Foreign Relations, and its influence over the media, tax-exempt foundations, universities, and government agencies that the international financiers have been able to dominate the domestic and foreign policies of the United States ever since.” — G. Edward Griffin /The Creature From Jekyll Island

That article states: “What a disgusting cesspool of self-serving corruption is the nation’s capital and no better example of that can be found today than Senate Majority Leader, Mitch McConnell who, according to longtime political activist, Ned Ryun, was a primary source of the anti-Roy Moore stories that are now attempting to sway the upcoming Alabama special election and help clear the path for a Trump impeachment attempt in 2018.

‘…I strongly suspect it’s a very short list of people, all who are associated with Mitch McConnell – whether it’s Josh Holmes, whether it’s Karl Rove, might even be Steven Law – I don’t know, but I strongly, strongly suspect somebody out of the McConnell camp planted the story. It was planted. This came with the blessing of Mitch McConnell at some point, that [sic] he was going to take a political shot at Roy Moore.’

“According to whispers, it wasn’t just taking “political shot” at Moore that motivating [sic] the McConnell camp. They want Roy Moore out of the way and replaced with someone of McConnell’s choosing, or even Moore’s Democrat opponent, Doug Jones, a man whose career is linked to the Bill Clinton administration. Moore would be a vehement defender of POTUS Trump and his policies. If McConnell is to succeed in laying the groundwork for an impeachment trial and vote in the Senate, he will need fewer senators like Roy Moore to contend with.

“McConnell is said to know actual impeachment proceedings remain a distant possibility, (the Paul Ryan-led House would first have to vote to impeach) but he is more determined than ever to be ready should that opportunity present itself. For those who might scoff at the notion of a Republican Congress actually pursuing articles of impeachment against Donald Trump, simply recall the failed votes to repeal and replace Obamacare, the ongoing troubles to pass tax cuts, and the number of Republican senators who continue to openly speak out against the President.

“The motivation to go after Trump is there. What is left is a simple matter of numbers. Getting rid of a Roy Moore and replacing him with an anti-Trump senator would give McConnell that much more leverage to make his desire to eliminate Trump and restore Establishment control a reality.” — Unquote DC Whispers.com 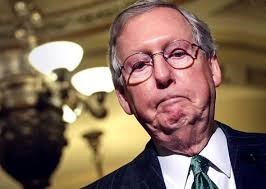 Drew Messer, a senior adviser to the Moore campaign, estimated that $30 million had been spent by Strange and McConnell’s allies against Moore.

After a year of non-performance in Congress on President Trump’s major campaign promises of repealing ObamaCare and major tax reductions, Mitch McConnell’s establishment obstructionism can truly turn the tide in the next election back in time where the GOP is rendered toothless in the world of total control by the establishment’s swamp, i.e. the GOP RINO’s and the socialist Dimms. Then away we go.