Above: Ontario, Canada’s new Premier Doug Ford vows to dissolve the Hydro One board and repeal its Green Energy Act and the Federal Carbon Tax, ending the UN’s agenda for Ontario.

Steve Cameron’s column “Pull the plug on Avista merger hysteria” in the June 28 Cd’A Press was written in a vacuum and does not reference the facts of the issue. No one knows who the unlisted owners of Hydro One are. Canadian law does not require their full disclosure. Oh, we know the referenced firms, but who are they? U.S. law states that they must be exposed, yet to date, they have not been. Many believe that they are Chinese!

The June 14 meeting in Cd’A on Fifth Street had only two of the three Idaho Public Utility Commissioners present — not three as stated in your article. One hundred and fifty-eight citizens gathered to make presentations to the Commission. Not one spoke in favor of the sale! Many of the presentations were very well organized and contained vast disclosure of information that had previously been hidden from the citizens. No one who spoke was in favor of the sale.

Many facts were alarming: Hydro One is a bankrupt company — currently owes $20 Billion in debt! Hydro One is not a generating company, only a distributor. Hydro One would receive over 6 to 9 Million dollars of potential gold from two gold mines they would acquire in Juneau (the AJ Mine and Treadwell Mine). Alaska “folded” to this proposed buy and “took a deal” and approved the sale. Unknown is the amount of capital to “grease the skids” in Alaska.

Avista is a monopoly, a Public Utility that has exclusive management of electricity. It is owned by the taxpayers who financed the building of dams and hydro-generated electricity, who have oversight and management of our God-given resource of water. The Public Utilities Commission does not own our water and power generating resources — we citizens do!

Here is a recent post by a Canadian citizen who wrote a response to this deal in the United States:

“Dear David and NWPOA: Your YouTube video is circulating in Ontario. We just kicked out our destructive Liberal government of the past 15 years. Conservatives came to power largely based on the massive wind energy-induced electricity prices forcing hardship on the most vulnerable citizens, especially rural communities.

“Doug Ford is a conservative populist leader whose key campaign promise is to dissolve the Hydro One board and repeal our Green Energy Act and the Federal Carbon Tax. He understands of the hoax and intent of this energy source. Unbelievably our past government, since the GEA became law, mandated the purchase of intermittent and unreliable wind energy while forcing provincially owned Niagara Falls and Nuclear generation to spill water and steam. Close to 100 percent of wind power ended up being sold at a loss after subsidized forced purchases. Nuclear was paid to spill steam as if it was electricity. Hundreds of billions have been wasted in pursuit of supporting the UN Agenda which even they admit is not about climate — it’s about redistributing the world’s wealth. Our provincial debt is now at $340 Billion which is the largest non-sovereign debt in the world. One reason — fake energy. And worse than removing municipal control of wind projects and forcing heat or est choices on the most vulnerable, the technology of wind generation has never been medically tested to be safe. First hand for the past 5 years I have witnessed neighbors living around our one small turbine suffer sleep deprivation, headache, nausea, dizziness, tinnitus and body tremors living from 215 to 600 feet away from a small 500 kW turbine. 600 noise and health complaints from over 20 different families while never once receiving even a response from our previous premier in 5 years. 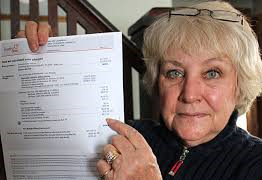 Outrage over Hydro One electricity bills

“We have faith Doug Ford will make changes as the people’s Premier. I would encourage your group to contact him and his new Energy Minister as they are about to begin the Hydro One board firing and ending Cap and Trade.

“Federally Justin Trudeau’s Liberal government will fall next election. I would suggest contacting the Conservative opposition leader Andrew Sheer with your Columbia River headwater fears. Trudeau is an absolute left-wing UN supporter and your fears about water dam elimination and returning the land to Mother Nature forcing relocation by removal of services or unsustainable power prices are right in the money.”

Finally, the governing bodies that have been working this deal with Avista officials did not disclose the proposal. The facts are the Board of Avista would receive over $50.5 Million in personal payoff if they approve the deal. The Chairman of Avista, Scott Morris, would receive $15 Million personally. This fact was revealed by Brandon Karpen, Asst. Attorney General, Contracts & Administrative Law Division, and State of Idaho. How is this good for the people?

Yes, under former President Obama, American Nationalism was discouraged by the politics, regulations, and laws put into place during his administration. Little enforcement of existing laws prevailed! Many companies were sold, trade deficits were encouraged, illegal immigration flourished, welfare for those immigrants grew significantly, the Iron Man Insignia was sold, hamburgers, electronics, harbor sites were sold to foreigners. All of those had been personally owned businesses! Hydro One is a monopoly.

The state of Oregon did not allow public testimonies on this issue, Montana has bailed, Alaska was rushed through, and Washington is almost a slam dunk due to payoffs. Only Idaho has an opportunity to stand up for the people. Our Utility Commissioners are CRITICAL in deciding this issue of NOT having our dams and waterways in the hands of a foreign nation, to provide return to natural environments.

Let the citizens speak the truth and stand up for our water rights. We do not ever want to experience the effects of horrible decision making that has forced over 60,000 Canadian citizens in Ontario Province to disconnect their electricity due to their inability to pay the current electricity rates, and another 392,963 Ontarians in electricity arrears and unable to pay electricity costs. Parts of some Canadian provinces are paying electricity rates increases of over 1,000 percent to a bankrupt Hydro-One, but Hydro One is attempting to re-enter Avista into the Paris Climate Accord. That is why Hydro-One rates are so high!

Angelo Lonzisero, spokesman for the Avista Customer Group states, “Since the Avista Customer Group (ACG) started its opposition to the Avista/ Hydro One merger, things have changed. Since we at ACG and the public have stated our reasons for opposition, the Idaho PUC has scheduled an evidentiary hearing this month which would not have occurred otherwise. Our group then requested intervenor status to be a part of the hearing. Now comes the Idaho Water Resources Board (IWRB) asking to intervene to protect the water rights of the Citizens of Idaho. Their rationale for this request uses the same issues that our group and our attorney stated in our request. IWRB is late to the game, since any other meetings would have already been completed.

“But, at a minimum, this illustrates the government agencies have really not investigated this proposed merger fully. Let us hope that we can shine the disinfecting light of truth into this proposed fiasco.”

Don’t approve the conditions that will lead to an “economic holocaust” in the United States.

Facts on this sale can be found at: