— Published with Permission of cfact.org —

If they can’t stop energy development, they block pipeline transport (and get unexpected help)

You can understand their frustration, as the steady stream of radical environmentalist successes during the Obama years has been replaced with endless setbacks. Oil, gas and coal leasing, permits and production have risen significantly. Big Green just lost its first Big Cities v. Big Oil climate change shakedown lawsuit. President Trump pulled the USA out of the economy-wrecking, all-pain-no-gain Paris Climate Treaty and will soon nominate another Supreme Court justice.

The fracking revolution (horizontal drilling and hydraulic fracturing) not only slipped in under their radar. The technology they absolutely detest has utterly destroyed their mantra that the world is rapidly running out of petroleum – and now is helping create millions of jobs, generate billions in government revenues, launch a petrochemical resurgence, and turn the United States into an oil and gas exporter!

Just as awful, extreme greens despise oil and natural gas, but are “forced” to use these resources every day for transportation, electricity, heating, air conditioning, cosmetics, pharmaceuticals, clothing, plastics in cell phones and solar panels, and countless other blessings that they never acknowledge.

In other examples, the Cardiac 3-D Print Lab at Phoenix Children’s Hospital makes precisely crafted replica hearts, blood vessels, ears, bones and other organs out of colored plastics to prepare for surgeries and save kids’ lives; and natural gas is slowly replacing high-sulfur bunker fuel in ocean transport.

But anti-fossil-fuel fanatics are clever, resilient and well-funded by liberal foundations and Russians. (See here, here, here, and here.) If they can’t block leasing, drilling and fracking directly, they find ways to “keep oil and gas in the ground” indirectly – by claiming methane from gas production could cause climate cataclysms, filing lawsuits, and taking “direct action” to delay or block pipeline construction.

A recent EDF report claims industry leaks 60% more methane than previously recognized. Industry says the claim is wrong, methane leakage is minimal and going down every year as technologies and practices improve – and natural gas production and transportation make a trifling contribution to a trivial amount of atmospheric methane. In fact, methane is just 0.00017% of the atmosphere (1/235th the amount of CO2), and neither gas has replaced the sun and other powerful natural forces that actually control the climate. 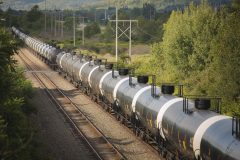 New pipelines are needed to move record amounts of US oil and gas to refineries, petrochemical plants, export terminals – and gas-fired generators that replace coal-fired units, provide emergency electricity for hospitals, or back up sporadic wind and solar power. Many lines serve new oil and gas fields; others will replace aging, deteriorating pipelines that pose increasing risks of leaks and spills, or replace railroad tanker cars that present much higher environmental and human safety risks than pipelines.

Enormous Permian Basin shale formations beneath Eastern New Mexico and West Texas feed an oil-producing region that is already North America’s biggest, and in a few more years could be producing more oil than every other nation in the world except Russia and Saudi Arabia. The oil reduces Russian, Iranian and OPEC ability to employ their oil as political weapons, and keeps oil and gasoline prices low.

Oil and gas production in the Permian, Bakken, Haynesworth, Marcellus and other shale plays creates thousands of construction, manufacturing and STEM jobs, plus vital city, state and federal revenues.

And yet plans to build or complete pipelines are often met with anger, resistance, litigation, and violence. The nearly completed Dakota Access Pipeline spawned illegal protest camps that left behind tons of trash and excrement, and housed hardcore radicals who destroyed construction equipment, shot at guards, tried to destroy a bridge, killed cattle and bison, and threatened to murder local residents.

The $3.5 billion Mountain Valley Gas Pipeline has brought seemingly endless litigation – and protesters who occupy trees, chain themselves to construction equipment and bizarrely claim they are acting in the finest traditions of the civil rights movement. A 16-mile long, 100-foot wide segment of the Atlantic Coast Gas Pipeline right-of-way would affect a mere 195 acres out of 1.1 million acres in Virginia’s George Washington National Forest; but agitators say it would create a vast “industrial zone” and “severely degrade some of the best remaining natural landscapes” in the entire Eastern United States.

Compared to these actions, litigation seems mild, and most projects are eventually approved by FERC, the Army Corps of Engineers and the courts. However, prolonged delays, multiple environmental studies and forced route changes amid construction add tens or even hundreds of millions to costs, for few benefits. Many legal battles dragged on for years: Keystone XL in Nebraska (oil), Sandpiper in Minnesota (oil), Mariner East 2 in Pennsylvania (gas), Bayou Bridge in Louisiana (oil), for example.

The double standards are glaring and unacceptable when all this is compared to minimal environmental studies and environmentalist concern typically associated with wind or solar installations, despite the enormous habitat and wildlife losses that those “renewable” technologies unavoidably cause.

Ironically, the anti-petroleum, anti-pipeline campaigns have been significantly aided by an unlikely and unexpected source: a “people’s politician” whose job and economic growth promises, policies, and expectations are intrinsically linked to fossil fuels. It is becoming increasingly clear that President Trump’s tariffs on imported steel and aluminum are adding significantly to pipeline and oil patch woes.

Even Energy Secretary Rick Perry has voiced concern that “a bullet” intended for the trade and tariff parity target might hit the oil production and transportation sector behind the target. Domestic metals producers benefit from the tariffs, but domestic users of steel and aluminum are getting hammered.

In fact, the tariffs and environmentalist actions are having a profoundly negative impact on pipeline projects and oil and gas production in many regions. In the Permian Basin, for example, oilfield service workers are being idled, and the number of drilled-but-uncompleted wells soared to 3,200 in May, a 90% increase from a year ago, as the lack of pipeline capacity forced fracking companies to reduce production.

Permian operators will likely have to close older wells within four months because there aren’t enough pipelines to get the oil to customers, one industry CEO has said. The worsening bottleneck there could benefit Russia, Iran, and OPEC, as they step in to fill global oil demand. Greenies must be chortling.

But maybe not all that much. The US fossil fuels boom may be slowing, but only temporarily and only a little. China, India, Africa, South America and Europe are all burning far more oil, gas, and coal. China and Eastern Europe are anxious to buy more US liquefied natural gas (LNG) to reduce coal use, and in the former Soviet Bloc to avoid being too reliant on Putin gas that could be used in strategic extortion.

Meanwhile, China has launched its first fracking operations, in a mountainous area south of Chongqing in southwestern China. It wants to help meet natural gas demands that are expected to increase more than 700% over the next two decades. Britain too is gearing up for major fracking-based gas production.

So all these rabidly anti-fossil-fuel actions in Oakland and New York and across the USA will have no effect on global emissions or even theoretically on Earth’s climate. It’s all a petulant part of the radical Left’s determination to employ lawsuits, Saul Alinsky tactics and violence to seize control of our economy, livelihoods, living standards and lives – regardless of the human or environmental costs.

Responsible people across the globe need to push back – or help the anti-fossil-fuel folks live according to their ideology, by cutting off their access to anything derived from the fuels they despise.

Paul Driessen is senior policy analyst for the Committee For A Constructive Tomorrow (www.CFACT,org) and author of articles and books on energy, climate change, carbon dioxide and economic development.