— Published with Permission of cfact.org —

“Ontario is probably the worst electricity market in the world.”

On March 8, 2018, former US Vice President Al Gore visited Ontario, Canada in an attempt to help then-Premier Kathleen Wynne win the June 7 provincial election. Gore said, “I travel all over the world, and I cite Ontario as an example of a provincial government that is doing it right: creating jobs, building the base for economic progress, while also staving off the severe danger that the climate crisis poses to all of us.”

In reality, Ontario’s approach to climate change and so-called green energy has been a disaster – an extreme example of what governments around the world should not do. That may be part of the reason Ms. Wynne lost to Doug Ford.

Ontario’s situation is dire. In “Ontario MPP ‘proud’ of province’s debt and ‘would do it again‘” (April 1, 2018), National Post writer Triston Hopper explained:

“Ontario’s debt, which currently stands at $311.7 billion, is the most held by any sub-sovereign government in the world. It has also grown precipitously under the current Liberal government, who first took government when Ontario’s debt stood at $138.8 billion.”

To fix the province’s woes, new Conservative Premier Doug Ford must first understand the causes of the problems. A major issue has been crippling energy and environmental policies.

The real rot in Ontario began in 1992, when then-premier Bob Rae appointed businessman and former UN Under-Secretary-General Maurice Strong to be the Chairman of Ontario Hydro, the province’s publicly owned electricity utility.

At the time, Ontario was an economically sound, prosperous province. All this started to change when Strong applied the energy and environmental policies he proposed for the entire world through his creation of the United Nations Environmental Program and his chairmanship of the 1992 Rio de Janeiro Earth Summit (officially, the UN Conference on Environment and Development, UNCED).

At UNCED, Strong introduced Agenda 21, a global energy and environment policy of world-shattering implications, and got it ratified. It was also at the Earth Summit that world leaders signed the United Nations Framework Convention on Climate Change (UNFCCC).

The UNFCCC’s primary objective was defined as achieving “stabilization of greenhouse gas [GHG] concentrations in the atmosphere at a level that would prevent dangerous anthropogenic [human-caused] interference with the climate system.”

Under this scheme, the fact that in 1992 (and even today) we had no idea what concentration of GHGs would lead to “dangerous anthropogenic interference with the climate system” was immaterial. The die was cast. The world-wide climate alarm had begun. 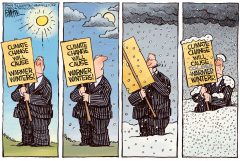 The UNFCCC even redefined the basic guidelines for the UN’s climate science body, the Intergovernmental Panel on Climate Change (IPCC). The guidelines now restrict “climate change” to include only variations due to human activity. Specifically, Article 1 of the UNFCCC treaty states:

“‘Climate change’ means a change of climate which is attributed directly or indirectly to human activity that alters the composition of the global atmosphere and which is in addition to natural climate variability observed over considerable time periods.”

The definition predetermines the outcome of the IPCC’s work. In particular, since the IPCC is required to support the Framework Convention, it had to change its mandate from its original purpose of studying all causes of climate change to the UNFCCC’s political definition of manmade climate change.

So the IPCC’s mandate was changed to assessing “the scientific, technical and socio-economic information relevant to understanding the scientific basis of risk of human-induced climate change…”

The problem is, you cannot determine the human effects unless you first know the extent and cause of natural climate change. The fact that we cannot meaningfully forecast the weather beyond 72 hours in advance demonstrates how little we understand about natural climate change and its causes.

Once the science was determined, the bureaucracies of national offices such as Environment Canada could push policies to cripple energy production, industry and development. Other countries and regions were slow to adopt these principles, but in Ontario Strong was able to use his position at Ontario Hydro with impunity, to implement the crippling policies he orchestrated in Rio.

In so doing, he stopped nuclear programs, closed coal plants, and diverted funds to alternate energies that were already shown not to work. As one report summarized:

Other premiers since, right through to Wynne, tried to privatize Ontario Hydro. But all failed to deal with the problem. Meanwhile, the cost of energy became an increasing drag on the economy and cost of living.

When Strong started as Ontario Hydro Chairman, the province had one of the most powerful provincial economies. It was consistently classified as a “have” province in the federal government equalization program, which begun in 1957 and designated provinces as “have” or “have not” based primarily on their ability to generate tax revenue.

In the ensuing grand socialist scheme, between 2012 through 2018, nearly C$121 billion was transferred from the “have” provinces of Alberta, British Columbia, Newfoundland and Labrador, and Saskatchewan to the “have not” provinces of Manitoba, New Brunswick, Nova Scotia, Prince Edward Island, Quebec – and Ontario. (See the table.)

From Strong’s tenure onward, Ontario energy costs continued to sap the vigor of its economy. Once an industrial powerhouse and the home of hundreds of thousands of high-paying manufacturing jobs, Ontario lost many of these jobs when companies either left the province or went bankrupt. Contributing to the downward spiral were skyrocketing electricity prices.

For consumers and small businesses, electricity prices have increased from 4.3 cents per kilowatt-hour for all times of the day in 2002 to 13.2 cents per kWh in 2018 during peak usage times – a 200% rise. Electricity rates for larger businesses follow the market rate and so vary widely throughout the day. For example, at 5 pm on June 26, 2018, the rate was 22.14 cents per kWh!

Independent energy researcher and former Ontario Independent Electricity Market Operator board member Tom Adams concludes, “The root cause of Ontario’s power rate cancer started with the coal phase-out” – which went from 7,587 megawatts of coal-based electricity in 2003 to zero by 2014!

To supposedly “lead the world” in “stopping global warming,” the provincial government closed all of Ontario’s coal-fired electricity stations, which provided about 25% of the province’s then-inexpensive electricity in 2002. And yet, even in 2003, Ontario accounted for a measly 0.5% of global CO2emissions.

So regardless of what one believes about the causes of climate change, the sacrifice was worthless.

Making matters even worse, the Ontario government spent billions of dollars erecting about 8,000 industrial wind turbines. In a report co-authored by University of Guelph economics professor Ross McKitrick, Mr. Adams noted: “Solar and wind systems provide just under 4 percent of Ontario’s power but account for about 20 percent of the average commodity cost.”

And so, Ontario went from being an economic powerhouse to joining the ranks of “have not” provinces that receive payments from Canada’s equalization program.

Not surprisingly, access to abundant, reliable, inexpensive energy has been a major factor differentiating the “have” and “have not” provinces. Mostly because of Hibernia oil, Newfoundland and Labrador became a “have” province. The other “have” provinces are also energy-rich: Alberta, British Columbia, and Saskatchewan.

So, the question now is: Can premier-elect Doug Ford get Ontario back on track with a sound energy policy? There is no better place for him to start than by publicly opposing the myth that human CO2emissions are causing dangerous global warming.

There is plenty of scientific evidence to support this. Ford need only consult the reports of the Nongovernmental International Panel on Climate Change, which summarize thousands of studies from peer-reviewed scientific journals that either refute or cast serious doubt on the climate scare.

Let’s hope Ford uses this important tool – and that the next example Ontario sets for the world is how to rebound from a green energy disaster.

Dr. Tim Ball is an environmental consultant and former climatology professor at the University of Winnipeg. Tom Harris is executive director of the Ottawa-based International Climate Science Coalition.