This is a question we get asked all too often by our readers, and we are amazed how IACI has been able to keep themselves so far out of the political limelight for most of Idaho’s citizens? IACI stands for the Idaho Association of Commerce and Industry, or as we like to call it the Idaho Association of Cronyism and Influence. IACI is the singular most powerful corporate lobbyists’ group in Idaho and has only one goal in mind to promote their corporate agenda and control our legislature and the legislative process. This is a special interest group that has its corporate tentacles in every facet of Idaho politics. Since its current president Alex LaBeau took over in 2006, this crony oriented organization has done all that it can to further the interest of the corporate entities that comprise it especially in the political arena. Their influence has become so widespread that if you are an elected official and they think you are against them or their policies, you will become a target of their Political Pacts in your next election. 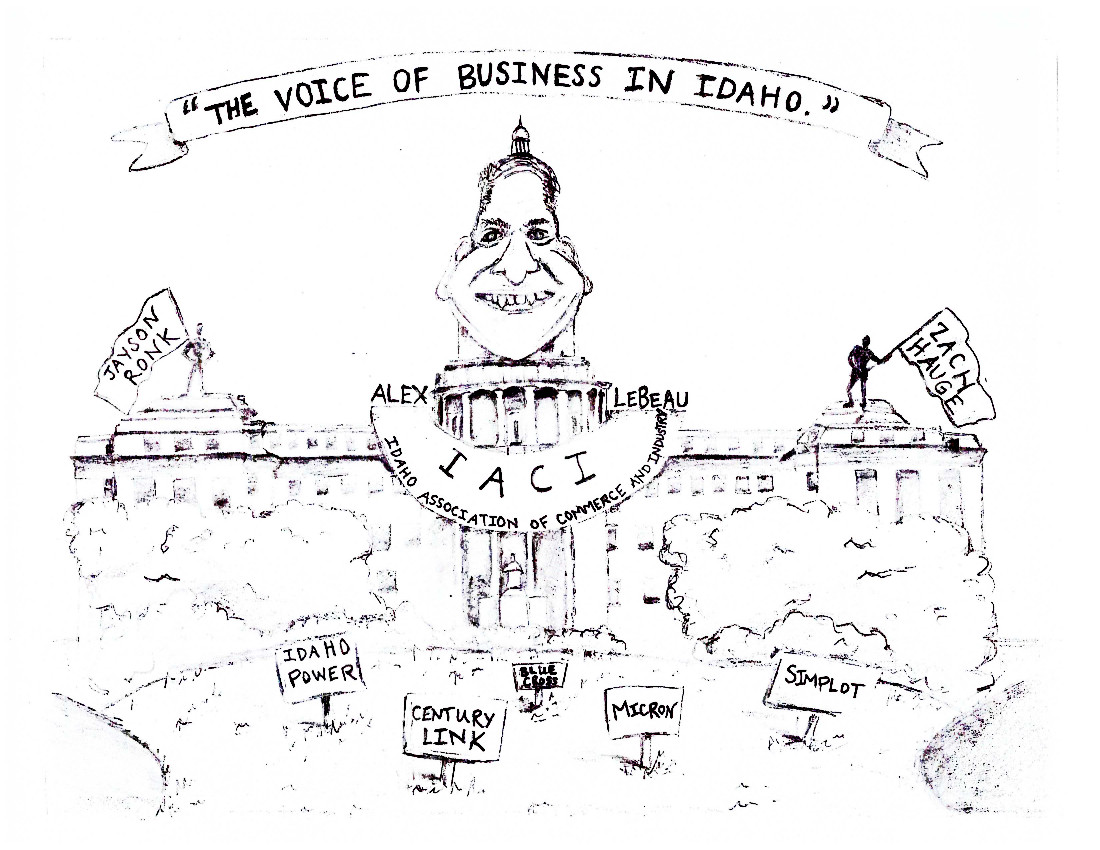 IACI likes to lurk in the shadows of our State Capital persuading legislators to go along with the bills they want introduced and voting against bills they don’t like. Last year a giant spotlight was shone on their president Alex LaBeau for a profane e-mail that was leaked to the press which targeted Senator Siddoway, Chairman of the Senate Tax Committee. According to the Idaho Reports Blog Written by Melissa Davlin who first revealed this e-mail. LaBeau had written this in regards to Siddoway’s comments that he would not entertain lowering taxes until the legislature raised the starting salary for teachers to $40,000 a year. We cannot print the words Mr. LaBeau used in his e-mail depicting Senator Siddoway and his committee as irrelevant with suggestions of retaliating against him. The e-mail contained such profanity it is not publishable.

Mr. LaBeau was put on leave after this incident and reinstated shortly after the controversy had died down and is once again in the driver’s seat as president. IACI went under cover of darkness for some time and had very little public communication, but you can bet your bottom tax dollar they were actively behind the scenes working with their bought and paid for legislators to get legislation passed that would benefit their corporate members. IACI is part of the reason we have so many moderate and liberal voting legislators in our state house. They are also a big part of why we lost conservative legislators like Monty Pearce and Lanore Barrett in the last election due to the lies perpetrated by their political pacts in their campaign literature. We can even thank them for giving us a third term lame duck governor who can do pretty much anything he wants with IACI’s money and his influence and not worry about voter retribution.

Don’t be deceived about how much big business is doing for you because, for everything they give you can be sure they are getting double or triple back. IACI has approximately 300 members mostly comprised of the largest corporations in our state who work in coordination with each other and are purveyors of favorable regulations to leverage power over all branches of our government. You will also find that many of these companies and their subsidiaries are linked to government contracts like the Idaho Education Network contract awarded to Century Tel that has cost taxpayers multi millions of dollars. To be sure, the core members of this corporate dynasty have a very tight grip on any and all decisions made in this state and there is not much that goes on without their approval. They are the epitome of “Crony Capitalism”.

Please keep in mind folks you are the ones who pay for these corporate cronies to have the influence that they do in our government. Foolishly, it is we the consumers who buy the products of these large corporate cronies that gives them the money to control our legislators and the laws and regulations they make in our state. When you pay your bill at Select Health, Blue Cross, Blue Shield, Idaho Power, Century Link or Intermountain Gas, a portion of that money goes to support IACI which gives it such a major say in the regulation of our state.

Below you will find the members of the Board of Directors for 2015 of this Crony Club. We would like you to remember that each and every time you pay a bill to them and you don’t express outrage over their membership in this organization, you are furthering their control of your lives.

We saved the best for last because of the perceived coercion which you might assume takes place in Idaho’s Medical Mafia, Healthcare providers and Health insurers.

These are the companies that were behind our legislature voting for a State Healthcare Exchange. They were and we believe still are behind the push for Medicaid expansion in our state. These are the companies that pushed for the 7 cent gasoline tax and vehicle registration increase. They have also been instrumental in keeping the grocery tax which hurts all middle and lower income families. Do you realize that Idaho is one of only 13 states that has a tax on groceries while corporations apply for and receive investment tax credits worth $30 plus million which by law we as taxpayers can’t find out who receives this money or how much they receive.

Welcome to the state of IACI.