NATO is vital to peace and prosperity in the U.S. and Europe. It safeguards the largest trading relationship in the world, ensures prosperity for Americans and Europeans alike, and deters and contains conflicts.

This is something Donald Trump and Barack Obama should consider before engaging in isolationist and dismissive rhetoric about the Alliance. Such talk could undermine the rewards America receives from being in NATO. The Republican presidential frontrunner told the Washington Post that the U.S. is paying too large a share of the total cost for a military alliance that has become “obsolete.” Essentially, Trump claims that the U.S. is not getting its money’s worth when it comes to the Atlantic Alliance.

“NATO is costing us a fortune,” Trump said. “Yes, we’re protecting Europe, but we’re spending a lot of money. … I think the distribution of the costs has to be changed.” The presidential candidate went on to say that while NATO was good in the early years of the Cold War, it needs to adapt to today’s security environment – fighting terrorism. www.washingtonpost.com/blogs/post-partisan/wp/2016/03/21/a-transcript-of-donald-trumps-meeting-with-the-washington-post-editorial-board/

Meanwhile, the President complained that the Europeans are not carrying their own weight. “Free riders aggravate me,” said the President. He went on to insist that the Europeans pay their “fair share” and that the United Kingdom would lose its “special relationship” status if it failed to do so. www.washingtonpost.com/blogs/post-partisan/wp/2016/03/21/a-transcript-of-donald-trumps-meeting-with-the-washington-post-editorial-board/

Trump and Obama, along with their supporters, fail to understand and appreciate the benefits NATO offers the U.S. For example, they point to estimates that the U.S. accounts for 73% of the roughly $1 trillion annually in military spending by NATO countries combined. While $730 billion is a substantial sum, that military spending supports a $1.5 trillion trading relationship of goods, services, and income – the largest trading relationship in the world. 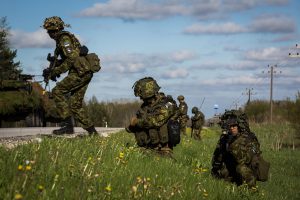 NATO forces participate in Exercise “Steadfast Javelin” in Estonia in May of 2015. Estonia is one of several former “Soviet satellite countries” assured it will remain independent because of NATO’s security guarantee. This mattered when Russia invaded Ukraine. (Image Courtesy of NATO)

The opportunity for this tremendous level of economic interdependence comes from the security guarantee provided by NATO. It is no accident that 22 of 28 EU members are also members of NATO. The bottom line is simple: Businesses don’t locate in neighborhoods where there is conflict or instability.

Second, NATO deters conflicts, or prevents them from spreading. When Putin annexed part of Ukraine, the Baltic States, and Poland and the Czech Republic were nervous. But imagine the concern of these small economies if there was not the security guarantee provided by a military alliance?

Third, while some European countries don’t spend as large a percentage of their GDP on defense as the U.S., Europeans pay in other ways. One, U.S. military bases (and troops) reside in Europe. Two, NATO conducts the vast majority of its military exercises in Europe, damaging farmland and disrupting road and air traffic for the average European. And if there was a war in Europe, it would be fought on European soil. It is hard to put a price tag on such commitments. 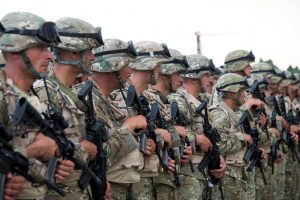 Georgian troops deployed to Afghanistan in June of 2013. Whether it is reintegrating a re-armed Germany into Europe shortly after World War II, or using non-NATO troops to support a mission as an incentive to future membership, NATO’s unique structure can get countries on Europe’s periphery to demonstrate their foreign policy commitments. This also helps ensure conflicts near Europe won’t spread into Europe. (Image Courtesy of NATO)

Unknown to Trump and despite Obama’s comment at the recent Nuclear Summit in Washington that countries need to “more effectively share intelligence with one another and with the U.S.,” the Atlantic Alliance has been adapting to current and future terrorist security threats. NATO’s intelligence-sharing on terrorism and WMD has occurred between members and non-members for some time now. Other NATO actions include: Conducting “pre-emptive” counterterrorism strikes against terrorist targets with a new “response force;” counterterrorism training of military personnel and civilians in Afghanistan and Iraq; and military cooperation with Central Asian governments. Adapting to new types of security threats has always been a part of the Alliance’s history; it has a successful track record of doing so.

Foreign policy initiatives during presidential campaigns always produce idealistic positions. George W. Bush argued militaries should be used only to “fight and win wars;” not to engage in “nation-building.” John Kerry believed the U.S. could “go it alone,” ending North Korea’s WMD program through direct talks with Pyongyang. And Barack Obama ridiculed Mitt Romney for citing Russia as a threat to the U.S. Presidential candidates rarely take foreign policy positions that square with the complexities of reality.

But while candidates’ foreign policy ideas aren’t always realistic, they are rarely harmful. This is not the case with Donald Trump and NATO. Questioning America’s commitment in Europe, while failing to address the benefits and costs involved or to provide an alternative is both short-sighted and reckless. And, it is President Obama’s previously estranged relationship with NATO that opened the door for Trump’s comments.

Steve is a political and economic researcher and analyst, focusing on public policy issues. He has been an analyst with a presidential commission and for Fortune 100- and 500-level companies across several industries. Ackerman is a regular contributor and commentator to journals and newspapers, and to radio programs like the Kevin Miller Show 5-9AM on 580 KIDO.