After a year of not prosecuting even one of the myriad list of existing documented violations of law by Teflon Democrats that are never reported on by the mainstream ‘Fake News’ media, we must now demand to know why they are never prosecuted.

Is Attorney General Jeff Sessions fecklessly not up for the job? Might actually be overwhelming for him, or is he doing the bidding of others like a good soldier of the establishment?

In the first place who would ever suspect that such a likeable, mild-mannered, good looking GOP former U.S. Senator with a good voting record, who also was the first U.S. Senator to stand up and endorse Donald Trump, could actually be a sleeper facilitator for the establishment AKA as the Council on Foreign Relations (CFR)?

After a year of more than enough patience by the American people, to see meaningful accomplishments come out of the Department of Justice, we must now question its leader, Attorney General Sessions’ performance.

Is he not up for the job, or does he have a hidden dark agenda to circumvent justice for the many obvious violations of our laws by a long list of Democrats that mysteriously are never prosecuted? Again, as Vince Lombardi famously said, “What the hell is going on here?!!!”

Lou Dobbs on Fox Business News said, “The Justice Department has gone rogue, it is in absolute disarray. It is unlikely that anyone can predict what direction it is going to take or its leader the Attorney General is going to engage in on any issue that I can think of. I’ve never seen the likes of it!”

It is absolutely imperative that a man in such an almighty important position has nothing but the best and most trustworthy assistants to administer the law, and then Jeff Sessions chose Rod Rosenstein as his Deputy Attorney General.

Under time constraints and a mindset of getting together the best he could get in a hurry, maybe we should cut Mr. Sessions some slack for this pick. But Rosenstein being approved 94-6 by a Senate that hailed him as a principled and independent U.S. attorney for both George Bush and Barack Obama could have been an indicator that all might not be so well after all, had Sessions known then that anybody being chosen by those numbers by this CFR/establishment influenced Senate is exactly what the socialist Dimms and GOP RINO’s of the CFR/establishment wanted. Oh, that dang hindsight. All this doesn’t begin to address the rest of the existing staff of Obama hold-overs still tending to justice as preferred by the CFR/establishment in the A.G. Sessions’ Department of Justice.

Then, Rosenstein put into place the infamous Special Prosecutor Robert Mueller who built a team comprising 17 other mostly Obama and Hillary supporting lawyers and a staff of over three dozen to pursue finding any way of taking out our elected President, be there any evidence or not, and cost be damned, the taxpayers have plenty of money, right?

Alan Dershowitz, a highly regarded retired Harvard Law professor and a well-known Democrat told Fox News that Mueller is “going well beyond his authority as a prosecutor.” Dershowitz charges that Mueller is turning constitutional actions by the Trump White House into crimes.

Last March, Sessions told conservative radio talk-show host Hugh Hewitt during an interview, “Well, I’m going to do everything I possibly can to restore the independence and professionalism of the Department of Justice,” At that time he was not ruling out the possibility of naming an outside counsel to investigate the handling of several matters by the Department of Justice during the tenure of his Obama-year predecessors, Eric Holder and Loretta Lynch.

That was then, and now, and for the last 9 months all we have been hearing on that matter is crickets.

Jeff Sessions really does seem like a nice guy and I really do want to believe in him and support his compliant performance. But where is the compliance? Granted there is a whole lot of justice to mete out and that includes dealing with the most heinous of criminals which are those violators of the public’s trust among our elected officials and their appointed hirelings.

Where is the pursuit of justice with the many high profile Democrats that get away with nearly everything?

The documented crimes and transgressions of the aforementioned ‘dirty democrats’ abound and have been widely reported on but always ignored by justice and ignored and lied for by their ‘Fake News’ big media and party comrades while being swept under the rug by the neo-cons at the direction of the CFR/establishment, i.e. the Council on Foreign Relations.

Attorney General Sessions should sink his department’s teeth into much that is begging for investigations and prosecutions among the Democrats that many believe can get away with anything, as is evidenced in a little studying: 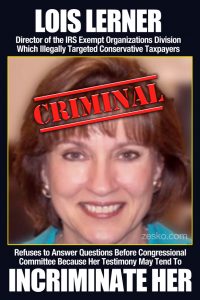 AND LET’S NOT FORGET THE ‘BILL AND HILL’ TAG TEAM, THE ‘DIAMOND JUBILEE’ OF THE TEFLONS

WE MUST DEMAND A GREAT JUSTICE DEPARTMENT!

For Justice not to find plenty of prosecutorial fodder among all the above speaks reams about what is wrong and this list is probably just the tip of the iceberg if ever serious unfettered investigations could ensue. To do a proper job of investigating and prosecuting the almost overwhelming amount of serious crime by these public officials and even larger big-time global crime syndicates (see: Deep State: Follow the Rothschild, Soros, and Rockefeller Money’) Sessions needs a clear focus and a much larger staff of dedicated patriots that take their oaths to the Constitution seriously.

Serious out-the-door culling of existing CFR/establishment staff needs being accomplished ASAP so meaningful justice can effectively begin. Replacement candidates should not be considered among any of today’s Democrats and must be carefully vetted among those in the GOP and quickly approved by ‘Bottleneck McConnell’s’ Senate. Also, see: ‘”Deep State” Bureaucracy vs. Trump, America, Constitution’ and ‘George Soros Dumps His Fortune into War on America, Humanity‘

The kind of money and effort being extended by Mueller’s ‘gang’ in pursuit of toppling Trump could go a long way in meaningful results on the above once he is fired. 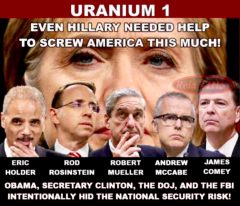 Sessions would be better off, even with an all ‘new to government’ staff that is developed by him than the Obama left-overs and entrenched CFR/establishment influenced government employees and all their links to potential prosecutorial targets’ connections.

IF SESSIONS CANNOT DO THAT, HE HAS TO GO, BECAUSE AMERICA’S JUSTICE DEPARTMENT IS OBVIOUSLY BROKEN AND WE JUST CAN’T TAKE THIS ANYMORE!

Being a nice guy is fine, but what we need is absolute performance in bringing to justice all those that violate our laws without picking and choosing with no considerations involved for anyone. 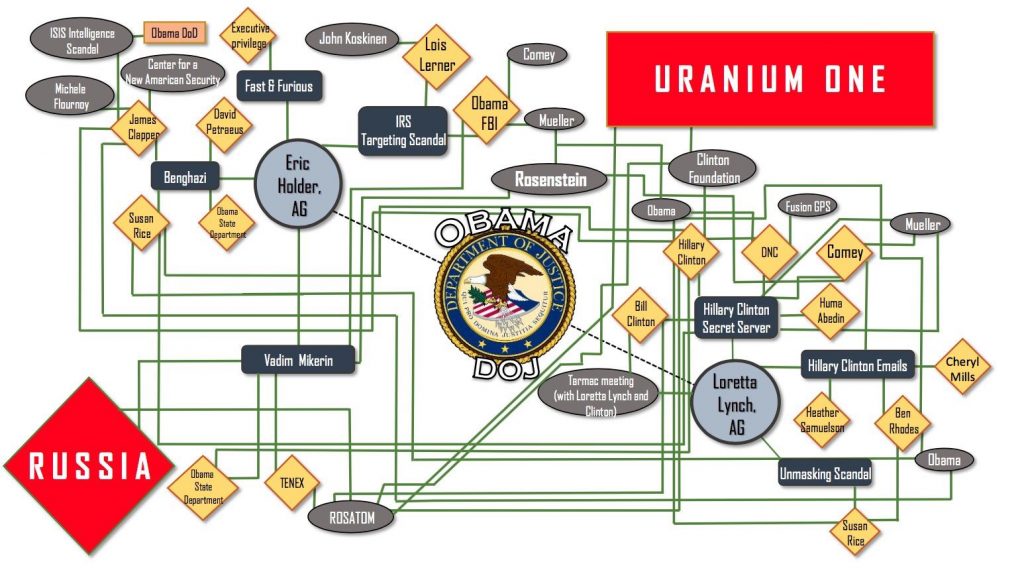 Mueller’s outrageous witch hunt must be shut down, and Mueller himself, with Rosenstein, need investigating for their part in UraniumGate where there is plenty of hard evidence for effective investigators to salivate over. This UraniumGate scandal and all its attachments with various people in high places taking money and breaking the law at every turn with the Clintons and Obama in the middle of it all would make our largest scandal in US history, the Watergate scandal pale in comparison.

The phony Mueller witch hunt has more than run its sorry course. It needs being halted immediately. The serious righting of Justice on the huge scandal that may forever be known as UraniumGate, needs being started in its stead, just to begin with, as well as investigating so many more injustices committed against the American people, that at the same time violated our trust, by so many untouchables in government.

Steve Byas of TheNewAmerican.com states: “The late Supreme Court Justice Antonin Scalia was the lone dissenter in a case that upheld the constitutionality of the law creating the office of independent counsel back in the 1980s, arguing that it was both unconstitutional and dangerous. He predicted then that these “independent” prosecutors would bring politically motivated cases, threatening the integrity of our political system.

“Mueller seems to be the embodiment of Scalia’s prescient concern.”

Maybe President Trump should replace A.G. Sessions with someone as effective as Rudy Giuliani was in cleaning up New York. Maybe Rudy himself? I know he would hate to go to Washington and likes what he’s doing, but America needs the likes of him. Sessions would go back to his Senate seat and that would resolve the Judge Moore battle. Although, I wonder how the CFR/establishment’s ‘control freak’ McConnell would react to that.

To take this to a little extreme, let’s say we get Rudy or a like performer cleaning up the Justice Department and getting things done, and he feels strongly that a special prosecutor would be helpful in going after the plethora of Teflons. So why not insert a bull in a china closet, Chris Christie. And he is looking for a J O B. I have friends who will give me heck for suggesting him, and I also question if he would be right, but I would have solace in believing that he could be like a vicious junkyard dog with these Teflon scum. I would like that a lot.

Americans would love to see dogged vicious prosecution of these arrogant elitists vermin who have for too long been untouchably protected, un-investigated, un-reported on by mainstream media and virtually immune to Justice. These heinous violators of our public trust are truly criminals of the worst kind and justice must be done! We are not a ‘Banana Republic!’

Where is our United States Justice Department?