Who isn’t absolutely fed up with the overwhelming displays of shrill and even violent protestations being aired non-stop in our media by the paid usurpers of the far left?

They are paid handsomely to raise hell with any elected official not in their camp of Alinsky-like comrades, and always show up on time, with professionally prepared signs and often arrive in expensive buses. See: Video of the buses stretching five city blocks. Their complicit media usually awaits their orchestrated arrival. Many of the professionally trained Antifa street protesters show up in expensive black ‘hooded uniforms’ with anarchistic tools such as clubs, helmets, megaphones, mace, spray paint and torches with their well-paid leaders edging them on.

How are these paid protesters who have shown up as anti-Kavanagh and never-Trumpers being allowed in the halls of Congress roaming freely to interrupt and stage a disgusting display of indignation against their opposing views? Their antics violate our freedoms to perform our law abiding duties! Why are they not arrested for disturbing the peace and inducing violent behavior into lawful civil discourse and procedures?

And almost nothing infuriates American citizens more than having something blatantly stolen from us such as having our peaceful existence and freedoms stolen by street violent anarchist thugs who are in our face interrupting our natural and lawful rights and breaking things.

Even worse is that they are being not only encouraged to keep up the civil unrest exhausting our nation by the likes of ‘Mad Maxine’ Waters but they actually have been hired by and professionally taught to do so by a former President of The United States.

“Chronic social irritation can do lasting damage to the fabric of a nation. By falsely accusing people of racism . . . or sexism . . . or homophobia . . . or Islamophobia — or whatever other “ism” or phobia they come up with next — these agitators are creating angst and hatred in people’s hearts that wasn’t there previously.

“But maybe that’s the objective. As Alinsky advised Obama and other young radicals: ‘A revolutionary organizer must shake up the prevailing patterns of lives — agitate, create disenchantment and discontent with the current values [until] masses of people have reached the point of disillusionment with past ways and values… The time is then ripe for revolution.'” – Unquote from the New York Post’s Paul Sperry in his article, ‘How Obama is bankrolling a nonstop protest against invented outrage, ‘ 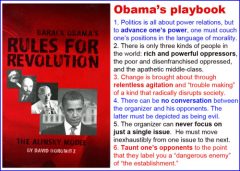 Without the funding for paying these hell raisers and their orchestrations by handlers through the Obama run ‘Organizing for America’ (OFA) these loud mouths would be no shows. See: ‘Obama’s ‘Trump Saboteurs’ at OFA Boasts 30,000 Paid Agitators & Opening 250 Offices across America’

Mitchell Shaw reported in Mid-November last year in his New American magazine article, ‘Trump “Protests” Manufactured by Leftist Elites and Manned by Professional Protesters,’ “Beginning in late October 2016, ads for paid protesters began appearing on Craigslist in Pittsburgh, Boston, Columbus, Denver, Philadelphia, and other cities. The ads, which were all carbon copies of each other, read:

Sperry continues, “Organizing for Action is drowning in money, by nonprofit standards.

THE FAR LEFT’S ROOTS AND BOSSES

Freedom is fragile and taken too much for granted by tuned-out laid-back Americans whose naivety is being exploited by these puppets of the deep state vermin directed by the Council on Foreign Relations/globalists community. See: “Who the ‘Establishment’ Really Is”

“The Council on Foreign Relations is “the establishment.” Not only does it have influence and power in key decision-making positions at the highest levels of government to apply pressure from above, but it also announces and uses individuals and groups to bring pressure from below, to justify the high-level decisions for converting the U.S. from a sovereign Constitutional Republic into a servile member state of a one-world dictatorship.” – Former U.S. Congressman from Indiana (D) John Rarick 1971

“The whole debate between voting for Republicans or Democrats is a scam. No matter who you vote in, the Council on Foreign Relations conspiracy marches on. The Clinton administration was flooded with Council members just like the Bush administrations before and after him were. The Council on Foreign Relations conspiracy has infiltrated our corrupt officials in the U.S. Government, the Freemason education conspiracy, and the corporate media brainwashing we’ve been exposed to all our lives.” – Liberal columnist Joseph Kraft, himself a member of the CFR

“It is through this front group, called the Council on Foreign Relations, and its influence over the media, tax-exempt foundations, universities, and government agencies that the international financiers have been able to dominate the domestic and foreign policies of the United States ever since.” – G. Edward Griffin / The Creature From Jekyll Island

OBSERVATIONS AND FACTS FROM ONE OF AMERICA’S MOST SAGE EDITORS

States senior editor of The New American magazine, William F. Jasper in his article ‘George Soros’ War on America: Time to Prosecute the Billionaire’s Global Crime Spree,’ “Many of them, no doubt, were hired in response to the advertisements for paid anti-Trump protesters that appeared on Craigslist and other media in Seattle, Portland, Chicago, Pittsburgh, Boston, Denver, Philadelphia, New York, and elsewhere. Many of these “spontaneous” protests/riots would not have occurred without organized efforts involving hundreds of buses transporting thousands of protesters/rioters, many of whom appear to have traveled across state lines.

“Many of the anti-Trump rioters, then, would appear not only to have violated state laws against rioting and inciting to riot, but also federal law against the same crime. Specifically, the rioters could be (and should be) charged under Title 18 U.S. Code § 2101, which provides

“(2) to organize, promote, encourage, participate in, or carry on a riot; or

“(3) to commit any act of violence in furtherance of a riot; or

“(4) to aid or abet any person in inciting or participating in or carrying on a riot or committing any act of violence in furtherance of a riot….

“Shall be fined under this title, or imprisoned not more than five years, or both.

“Obviously, the anti-Trump rioters who were arrested for starting fires and committing other acts of violence and public disturbance should be prosecuted under applicable state laws, and those who traveled interstate to do the same should also be prosecuted under federal law as well. But what about the organizers of the riots, those who hired the rioters and transported the perpetrators across state lines to engage in this criminal activity? Are they not also culpable under the “aid and abet” provisions cited above? Are they not also liable for prosecution under the federal conspiracy statute (18 U.S. Code § 371) which provides:

“If two or more persons conspire either to commit any offense against the United States, or to defraud the United States, or any agency thereof in any manner or for any purpose, and one or more of such persons do any act to effect the object of the conspiracy, each shall be fined under this title or imprisoned not more than five years, or both.”

LAW ‘ENFORCEMENT’ SHOULD BE DEMANDED! 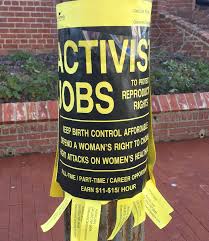 Obama’s ‘Organizing for America,‘ (OFA) needs taking down along with the Soros group of funders and organizational heads whose clandestine goal is the overthrow of our system. Courtesies to an ex-President be damned! BO’s corruption and many machinations have been overlooked and tolerated for too long. He is blatantly an outright anti-American with questionable past with no previous records to show for except his sorry legacy that he can’t run from. Identify his illegal transgressions and bust him. He’s creating a strong new legacy for himself, a very deceitful one that is all evil. Saul Alinsky would be proud.

Stopping the funding stops the paid street stooges who haven’t much of an idea about anything but repeating the mantra they hear and are told to rant, that we are all fed up with. The stooges, their placement via buses, their signs, and their professionally orchestrated actions largely dissolve away when the money is gone. Grounds for arrest and prosecution must be identified and the pursuit of justice begun.

These violators of our laws must be held accountable and prosecuted.

Wrongdoers have brought upon the People an evil day:

“It will be an evil day for American Liberty if the theory of a government outside supreme law finds lodgment in our constitutional jurisprudence. No higher duty rests upon this Court than to exert its full authority to prevent all violations of the principles of the Constitution.” Downs v. Bidwell, 182 U.S. 244 (1901).

There is some serious Deep State accommodating obviously going on in our halls in Congress who have allowed the attacks against Brett Kavanaugh and little is being done or said about it. It cries to be dealt with.

The hapless far left Dims are the lead soldiers of the CFR/UN globalist whose primary focus is to transform America as a sovereign nation to become a member state of a global government run by unaccountable unelected elitists who know best about everything for everybody.

America direly needs an authentic patriot to serve as an effective ‘Constitutional’ Attorney General who will meet out equal justice to all.