Nothing should be taken more solemnly by Americans than our Pledge of Allegiance to the United States of America.

However, the last three words to that serious oath ‘justice for all,’ today, are left begging for relevance.

Most of us, upon hearing those words think of justice to mean fairness. As justice has evolved in our republic, it simply means the enforcement of laws that might really have not that much to do with fairness. Just, rules of men.

For instance, is it fair for rules written by bureaucrats that stand as law when enforced on changing water restrictions to charge landowners outrageous fines that take property literally away from them? No, it is not fair, but as these sorry bureaucrats and other lawmakers foist their interpretations of rules that become laws that are truly unjust, they must be enforced. Most of these unfair rules of law are about control.

Most of us have by now, heard the many statements about how many laws the average American violates ‘innocently without knowledge’ every day.

Justice today might be thought of as ‘cafeteria law,’ since one could probably find some kind of law to deal with about anything you could be interested in. Lawyers are the craftsmen that research your applicable best fitting law and then morph into great debaters after shopping for judges and juries. That’s most often the fit for ‘average Americans.’ Fortunately, most of the time, justice does prevail and fairness, anymore, not so much, especially with such as land and water rights.

BUT WHERE IS THE JUSTICE FOR THE TEFLON DEMOCRATS? 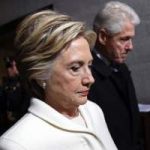 They are virtually never even charged let alone prosecuted.

The recent irony we’ve endured of watching the Democrats essentially controlling the diversionary ‘false flag’ investigation by Special Council Mueller to pin something on President Trump alleging that he colluded with Russians against ‘the reported very corrupt Clinton campaign’ has pretty much run its course with Americans who are getting real vetted news from sources other than the complicit big media and most local newspapers tied to them.

See: Russian Collusion? Yep, But It Was Clinton/Obama, Not Trump

The ‘Teflon’ Clintons and Obama have much to answer for in a world of true justice.

See: Here They Are: Hillary’s 22 Biggest Scandals Ever

DOES AG SESSIONS NOT PROSECUTE THE ESTABLISHMENT ELITE?

The above-linked article from C. Mitchell Shaw article on ‘Russian Collusion’ states, “Newly released information confirms that it is Hillary Clinton — as secretary of state — and not Trump who can be shown to be “Putin’s puppet. The Hill, Fox News, Newsweek, and others are reporting that a deal between Clinton’s State Department and Russian interests that transferred 20 percent of U.S. uranium to Russian control involved bribery, collusion, and cover-up. And Clinton’s fingerprints are all over it.”

The whole cast of complicit characters involved in the investigation of this news controlling ruse, ‘the Trump Russian fiasco,’ also involving those very investigators namely: Rosenstein and Mueller and including former FBI Director Comey are now front and center in what should be the investigation with a solid basis for immediate action. But, where is a concerned, decisive prosecutorial Attorney General? I’m hearing crickets.

AN OPPORTUNITY FOR RICHARD BURR’S VINDICATION 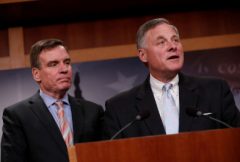 It so happens that I knew NC Senator Richard Burr, chairman of the Senate Intelligence Committee, having called on him in Greensboro, North Carolina when he was a sales manager for a distributing business I worked with for advertising and articles in my trade newspaper, Carolina Retailing News in the 80’s. So it has been a grave disappointment for me to see his establishment colors glowing brightly, seemingly at the behest of his best bud, VA Senator Mark Warner’s neocon agenda, which was all about kyboshing the narrative about Russia having any effect on our election through social media.

But now he told CNN Wednesday, Oct. 22, that the “revelation” that the Clinton campaign and the DNC paid for the dossier changes the direction of the investigation into Russian collusion. “This provides us the ability to connect some dots that we couldn’t do before this, Burr said, adding, “And any investigation when you have a revelation this big, it begins to clarify some pictures that you were already trying to understand.” He went on to say that this new information “will require us to dig a lot deeper in some areas that maybe a week ago we weren’t planning to.”

Being that I do believe my old acquaintance has fallen deeply into the quagmire of the establishment swamp, it will be of great interest to me to see if he can patriot up and vindicate his record of quelling things.

There is so much Teflon to remove, it is sickening. Check out the elite’s unprosecuted abuses of our legal system:

The oaths taken to uphold our Constitution should be held sacred. I have always said that violation of the public’s trust is the most heinous of crimes. We need to be demanding our ‘Justice for All?’

Was Justice Served or Slapped on a Platter?