DO WE HAVE TO INVADE MEXICO TO STOP IT?

The mass immigrations of illegal immigrants from countries south of Mexico’s borders would not be here if it weren’t for Mexico.

As Phil Kent at philkentconsulting.com reports on his website in his article ‘Comparing Mexico’s Tough Immigration Laws To Ours:’

Clearly, Mexico’s immigration laws are far tougher than the United States. Yet its sanctimonious legislators will spin gullible American journalists about how they somehow hold the high road with regard to their immigration laws.” – Unquote

In the second place, Mexico practically rolls out a red carpet when these mass migrations are created to pass through to America by allowing them in country, giving them time to gather a collective, watching it organize and then passing all the way through their country, unrestricted, to our door. Mexico practically ushers these illegal immigrants through all of the approximately 1800 miles from that southern border to their northern border as though they are chaperoning them to our front door. Never mind, that they would imprison an American for illegally crossing their border.

A CONSPIRACY WITH MEXICO?

Quoting Warren Mass of TheNewAmerican.com in 2016, “The National Association of Former Border Patrol Officers (NAFBPO) released a statement that utilized refreshing logic in pointing out what should be obvious to almost anyone wondering how tens of thousands of unaccompanied children could travel 1,800 miles on their own to a common destination:

‘This is not a humanitarian crisis. It is a predictable, orchestrated and contrived assault on the compassionate side of Americans by her political leaders that knowingly puts minor Illegal Alien children at risk for purely political purposes. Certainly, we are not gullible enough to believe that thousands of unaccompanied minor Central American children came to America without the encouragement, aid and assistance of the United States Government. Anyone that has taken two six to seven year old children to an amusement park can only imagine the problems associated with bringing thousands of unaccompanied children that age up through Mexico and into the United States. I doubt even the Cartels would undertake that chore at any price. No, it has to be heartless corrupt politicians and their minions lusting for more money and power.’ 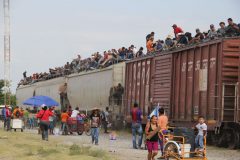 “As part of our research, we spoke with Andy Ramirez, a recognized national expert on border security who has testified before Congress, the California state legislature, the DHS and the DOJ. Considering both the large numbers of unaccompanied children and the long distances involved, Ramirez stated bluntly: “There is no way this could have been done by an alien smuggling organization [ASO]. It had to have been done at a much higher level.”

So throw in the fact that Sara Carter reported in The Blaze in 2014 that ‘Armed Mexican Troops Have Crossed the U.S. Border More Than 300 Times Since 2004″ and there is serious fodder for consideration of giving Mexico a taste of our feelings about their purposeful violations of our nation’s border.

Plus, keep in mind that all our heightened attention, resources and money being expelled on this intentionally created crisis serves as a great distraction to the drug cartels thriving endeavors to penetrate our border.

SOLUTION: IT’S ALL ABOUT ATTITUDE

America and Mexico have not exactly been a mutual admiration society for some time. And now, America has clearly been violated and invaded by Mexico and it’s time America needs to affect Mexico’s attitude. Maybe we should put Mexico on notice, perhaps to start with, by invoking trade restrictions. Think North Korea. Severe, restrictions.

If that doesn’t get immediate attention, perhaps we should go to level 2. Think red line, and unlike Obama’s red line, it is a real Trumpian red line which we back up quickly. Perhaps some serious military exercises with a lot of heavy armor and aircraft breaking things. In Mexico!!! You would think that would affect some major changes. I don’t think they would be loco enough to keep on keeping on as usual.

In other words, a big ‘back atacha in spades’ is overdue just to see how it affects their attitude about our border, our legal immigration laws and our sovereignty. Wars have been started for less than we have been putting up with.

And, thank God Obama is no longer President.