A review of the Masterpiece Cakeshop case and the performance of the Republican majority court.

I’m not a negative nitpicker determined to find fault, but I am committed to putting things in proper perspective, comparing them to fixed, objective standards and timeless truths. That includes giving an honest assessment of the Masterpiece Cakeshop case recently decided by the U. S. Supreme Court, and of the performance of the court in general.

Though the court found in favor of the side that the Christian right had hoped for, it did so in a manner that was not actually a victory for religious liberty and freedom of conscience. In fact, the decision actually serves to cement the idea that homosexuals have a “right” to be served by individuals and businesses, even when providing those services violates the personal convictions of the service provider.

The Case of the Wedding Cake

We’re talking about the case of Jack Phillips, owner of Masterpiece Cakeshop, who declined to provide a cake for a so-called “same-sex wedding,” as doing so would have violated his religious convictions. The “aggrieved couple” who requested the cake, appealed to the Colorado Civil Rights Commission which dismissed Phillips’ religious concerns as irrelevant and ordered him to bake the cake. The case made its way to the U. S. Supreme Court which found in Phillips’ favor, but not for the reasons the Christian right had hoped.

Supreme Court rulings are only binding on the parties joined in the case. Decisions of the court do not constitute law as the U. S. Constitution vests all legislative power in Congress. Therefore, the ruling itself is of little consequence to anyone but the parties named in the case.

However, the written opinions of the justices, explaining why the court decided the case the way it did, have a far-reaching effect. Court opinions are looked to as establishing a precedent for other courts to follow in the future; not that courts must follow such precedents, but, right or wrong, they usually do.

In the case at hand, though the court found for Mr. Phillips, it did so on the basis that the Colorado Civil Rights Commission had been inconsistent in its application of the state’s anti-discrimination law. The commission had allowed pro-homosexual bakers to decline to produce anti-homosexual/pro-traditional marriage cakes with scripture verses on them which the bakers found offensive, yet it disallowed Phillips’ objections to producing a pro-homosexual, same-sex wedding cake. The commission gave different weight to the secular objections of the pro-homosexual bakers than it did to Phillips’ religiously based objections.

The Supreme Court overturned the Civil Rights Commission, not for the sake of protecting Phillips’ right of conscience to decline to engage in activities that violated his beliefs, but because the Colorado commission failed to be even-handed in its weighing of secular versus religious objections voiced by the various bakers who had declined to bake cakes with messages they found offensive.

In other words, if the Colorado Civil Rights Commission had ordered the pro-homosexual bakers to bake the anti-homosexual cakes, all indications are that the Supreme Court would have upheld the commission’s order that Phillips produce a pro-homosexual, same-sex wedding cake. That’s not a victory for religious liberty or freedom of conscience.

Presented with the opportunity to assert the inherent right of all men to worship and serve their Creator according to conscience and to never be compelled to act in violation of their religious convictions, the Supreme Court, very clearly and purposely, declined to set such a precedent. 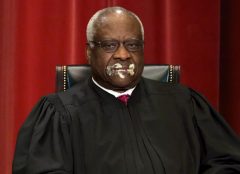 Justice Thomas has cake on his face for only ‘concurring in part’ with the majority opinion.

Instead, the majority opinion (joined by all the Republican appointees to the court except Justice Thomas who only concurred in part) actually declared that the Constitution and laws can and must be used to protect the “dignity” and “civil rights” of homosexuals, indicating the right to receive same-sex wedding related services on equal terms with heterosexuals. The opinion went on to quote from the Obergefell decision which declares a First Amendment protection of “religious organizations and persons” to “teach the principles . . . central to their lives and faith,” then stated that such protections do not allow, “business owners and other actors in the economy and in society to deny protected persons equal access to goods and services.”

That phrase, “protected persons,” points to a key problem at the root of this whole issue – the fact that both the legislative and judicial branches of government have carved up our society into various special groups and protected classes of persons, then endowed each with various special rights. There is properly only one class of persons, all of which are created equal, and which share one set of rights with which they are endowed by their Creator. Until that eternal truth is recognized and enshrined by the court, conservatives will never get the judicial rulings they hope for.

The court did acknowledge a need not to show “undue disrespect to sincere religious beliefs,” yet, “without subjecting gay persons to indignities when they seek goods and services.” Those two things being impossible to do simultaneously, since Christianity and sodomy are in direct conflict, the court consciously chose not to determine how those disparate objects can be achieved, and, instead, kicked the can down the road for a future court to decide. Nevertheless, if that future court looks to this court’s opinion for guidance, it most certainly will not recognize a right for Christian business owners to opt out of providing services on the basis of those services violating the business owner’s religious convictions.

So, the precedent that this Republican majority court chose to set is that: 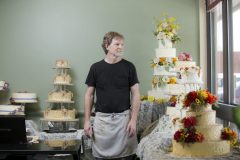 For those who doubt my assertion as to the precedent set by this case, or that it will be used in requiring others to violate their convictions in the future, only three days after this Supreme Court decision was handed down, an Arizona court ordered two Christian store owners to make wedding invitations for a same-sex couple and actually quoted a portion of the Masterpiece Cakeshop opinion in its ruling. So, the precedent is set; sodomy must be accommodated; religious conviction is no excuse (see the article here).

I stress the fact that this is a Republican majority court because, for as long as I can remember, I, as a Constitution Party member and supporter of any Biblically and Constitutionally sound candidate regardless of party or supposed “chance to win,” have been told that we must compromise and come together around the Republican we are told can “beat the Democrat” because they will make conservative Supreme Court appointments.

Given the complaints by conservatives about the judiciary, and the constant dire concern for who will make the next Supreme Court appointment, it might surprise you to learn that the U. S. Supreme Court has had a majority of Republican appointees since 1972 (with the exception of 2016 when an unfilled vacancy left the court at equilibrium for a year). In fact, from 1976 through 2009, Republican appointees held a 7-2 majority and even an 8-1 majority for a few years in the early 1990s.

So, what kind of progress has the conservative cause made under the Republican majority court?

1973 – Roe v. Wade: In a 7-2 decision, the Republican majority court ostensibly “legalized” abortion as a constitutionally protected right. Abortion was prohibited by law in every state until 1967.

2003 – Lawrence v. Texas: The court, with a 7-2 Republican majority at the time, voted 6-3 to strike down Texas’ anti-sodomy law, effectively invalidating the anti-sodomy laws that were still in effect in 13 other states. Sodomy was a felony in every state until 1962.

2015 – Obergefell v. Hodges: State-level bans on so-called “same-sex marriage” were deemed unconstitutional, resulting in all states now supposedly being required to allow, and recognize, same-sex marriages, despite the U.S. Constitution granting the federal government no jurisdiction in the matter of marriage and the 10th Amendment reserving such matters to the states and the people.

2018 – Masterpiece Cakeshop, Ltd. v. Colorado Civil Rights Commission: The court affirmed the right of homosexuals to obtain same-sex marriage services on an equal footing with others, effectively extending the Obergefell decision that required states to recognize same-sex marriage, into the private realm of requiring individuals and businesses to recognize the same without exception for religious conviction.

Yes, I understand that a Democrat-controlled court would have sought to plunge the country deeper into depravity faster, but the intellectually honest among us owe it to ourselves to take a dispassionate look at the performance of the court and endeavor to put its performance into Biblical and Constitutional perspective.

Losing What We’ve Compromised to Keep

For as long as I can remember, the right has been supporting candidates and a party that do not actually represent the Christian-constitutional-liberty values of traditional conservatism. Conservatives have been asked to compromise their values at every election in the name of beating the Democrat. The right no longer has a vision of victory, but merely of avoiding defeat.

One of my spiritual mentors once said, “What you’re willing to compromise in order to keep, you’ll lose.” If you don’t believe it, just look at that list of Supreme Court decisions again. It tells the story of decades of the right compromising at the ballot box in order to beat the Democrat and get Supreme Court appointments, only to have that very court take away what the right was trying to keep.

It’s actually the spiritual law of sowing and reaping that we’re running into here (Gal 6:7). We’re sowing compromise at the ballot box, and, in return, we’re justly reaping compromised leaders who give away everything we were trying to keep. God and His spiritual laws are not mocked. The right has been on the wrong side of a lot of spiritual laws; this is just one example.

Is there hope for the Christian right?

Yes, of course, if we REPENT!

I have long contended that the problem in America is not the liberal left, but the spiritual-political state of the Christian right. Correcting that begins with recognizing the error of our ways and determining to get ourselves back in line with God – that’s what 2 Chronicles 7:14 is really about.

The church needs repentance, revival, and a spiritual awakening to the reality of God. We need an outpouring through the Holy Spirit of the manifested presence of God that brings a holy reverence, awe, and wonder at the glorious, splendor and excellence of a holy, almighty God. Then, when we, in the fear of the Lord, become fully committed to Him, He will have a people to whom He can show Himself strong (2 Chr16:9).

Meanwhile, remember, you can’t compromise your way to victory.

Additional resources for information and insights on the Masterpiece Cakeshop case.