These structure fires occurred during the same time period that five cabins at Cabin Creek were ‘accidentally’ burned to the ground. In this instance, the rangers reported they were “burning garbage” when the flames suddenly got away from them. There was a group of professional forest fire fighters at the site at the time, who, according to the rangers, were unable to contain the flames that consumed the privately-owned cabins.

The worst injustices often fly under the media radar, not because they are not newsworthy, but because they happen in small towns in remote regions of the country.  But there are citizen journalists watching and documenting appalling cases of federal malfeasance, such as those taking place in Idaho’s Payette National Forest. 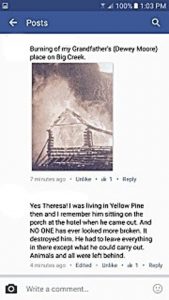 Scott Amos has been tracking some of the outrageous and unlawful activities on the parts of Forest Service (USFS) rangers working out of the Payette National Forest station. In his blog, Idaho vs USFS, Amos shares his account, from which the below summary is taken, submitted to the Department of Agriculture (USDA) Inspector General’s office as part of an ongoing criminal investigation into certain rangers’ activities.

Amos, who works in the area and makes his home within the boundaries of the Payette National Forest, along with others familiar with the operations of the USFS in the region, claim that conflicts within the Payette go back to its inception, when rangers forced homesteaders off their homesteads, insisting they would never be able to “prove up in that area.”

The theft of items and burning of private structures by Forest Service Rangers:

Certain managers of the Payette National Forest have directly and indirectly enabled unlawful activities by some of its employees, including covering for the theft of items and burning of private structures in Chamberlain Basin.

Several items of historical significance and monetary value were unlawfully removed or stolen by Payette National Forest Service employees during the execution of project number PY2001-1569, as outlined in a report by then Forest Service Archaeologist, Larry Kingsbury.

The current Payette National Forest District Ranger, Anthony Botello, has failed to take corrective action or discipline employees involved in unlawful activities. Botello contends that Kingsbury’s report of the theft is false, and he appears to be abetting Payette National Forest Service employees involved in violations of the National Historical Preservation Act, which is referenced in Kingsbury’s report.

Removal of historic cabin based on specious claims by Forest Service archaeologist:

Despite his findings that the Payette USFS acted unlawfully in removing items and burning historic structures in Chamberlain Basin, in the case of the historic cabin of Bill Timm, Kingsbury used specious reasoning to conclude that it should be removed. Scott Amos’ blog provides the following background:

Bill Timm graduated from Stanford University with a degree in mining engineering, alongside president Herbert Hoover in the 1880s. He was one of the first assayers for the US Assay office in the town of Roosevelt. He worked as postmaster for the canvas post office in Roosevelt. He, like Hoover, dabbled in politics, once holding the title of “Senator.” He left his mark on Roosevelt by building the only remaining cabin in Roosevelt from that era. His cabin was constructed in 1903 in the historic Roosevelt Mining District, which is on the National Register of Historical Places in its entirety.

Despite local knowledge and available research on the Bill Timm cabin, Larry Kingsbury asserted that the construction date for the cabin was 1969. Kingsbury himself provided Scott Amos with a photo of Bill Timm from the Stibnite Miner newspaper, dated 1949. Though Bill Timm died in 1963, Kingsbury insisted that his cabin was not built until 1969. In so doing, he determined it was “non-historic” and should “be removed”(burned to the ground).

Since the early 1990s, some managers of the Payette and Boise National Forest offices, have acted unilaterally and aggressively against private property owners. According to the account by Scott Amos; Clem Pope, Jim Egnew, Fred Dauber, Sonny Lasalle, Jane Wurster and others in USFS leadership, traveled to Stibnite, Idaho, and began openly harassing mining employees. These forest rangers were apparently upset that local property owners, Robert Stockton and his wife, had cleaned up, partially renovated and moved into a cabin built by the Boy Scouts of America, which was located on private land in Stibnite. Reportedly, more than a dozen people witnessed Dauber and Lasalle order Stockton and his wife to “vacate the premises immediately” because “we”(Forest Service) are “going to burn it down.”

Despite the fact that USFS blamed the destruction on a wildfire that swept through the area, witnesses said they saw prominent Payette National Forest officials set the Boy Scout cabin ablaze. Many other structures and homes in Stibnite “accidentally” burned in similar fashion. The home of Jim Adkins was also burned. And according to documents obtained through a Freedom of Information Act (FOIA) request, the Payette USFS paid a contractor $6,990 to set it on fire.

According to Amos, once he started documenting and recording the unlawful destruction of cabins on private land and public land, the Payette USFS closed the only access road to his private property. He attended all the road closure meetings held by the USFS  during the public comment periods for the Big Creek and Yellow Pine Travel Management Plans. The supervisor for the Payette National Forest, Suzanne Rainville, told Amos that the access road to his property was closed under the Big Creek and Yellow Pine Travel Plan, and, despite having attended all of the road meetings, he “must have missed it.”

However, Anthony Botello, Krassel District Ranger for the Payette National Forest, had a different justification for the closure. He declared that Amos’ access road was closed under the ‘Yellow Pine and Eugeren Hazardous Fuels Reduction Project’ which was completely unknown to Amos and others who lived in Yellow Pine, including local leaders. County Commissioners Frank Eld, Ray Moore and Gordon Cruickshank, and Jason Gould, tribal leader and former president of the Columbia River Inter-Tribal Coalition, stated they were never informed of the USFS ‘fuels reduction project.’ Additionally, the local paper, Star News, failed to publish a notice of the public scoping period for the project, which is required by National Environmental Policy Act (NEPA) and Section 36 of the Code of Federal Regulations (CFR).

The Payette USFS also violated federal law and protocols as outlined in the Forest Plan, which requires the inclusion of “states, Indian tribes and the nearest affected community.” Instead of making a good faith effort to hold public meetings locally, the USFS moved its public meetings to Boise, Idaho, 156 miles away. Furthermore, Boise is outside the boundaries of the Payette National Forest. It appears to be a deliberate attempt to exclude the community affected by the policies formulated by the Payette office.

Scott Amos believes the closure of his access road was retaliatory. The USFS violation of NEPA by holding meetings in far-off Boise, is also strikingly brazen. But there appears to be a systematic omission of public input by the Payette USFS. Current leaders, including Anthony Botello, Keith Lannom and other high-level officials, have become more contemptuous, skipping public comment periods altogether. They have claimed that the road closures are “categorically excluded” from certain provisions of NEPA, which only became applicable when the 2014 Farm Bill was passed, but the arbitrary road closures began prior to that. 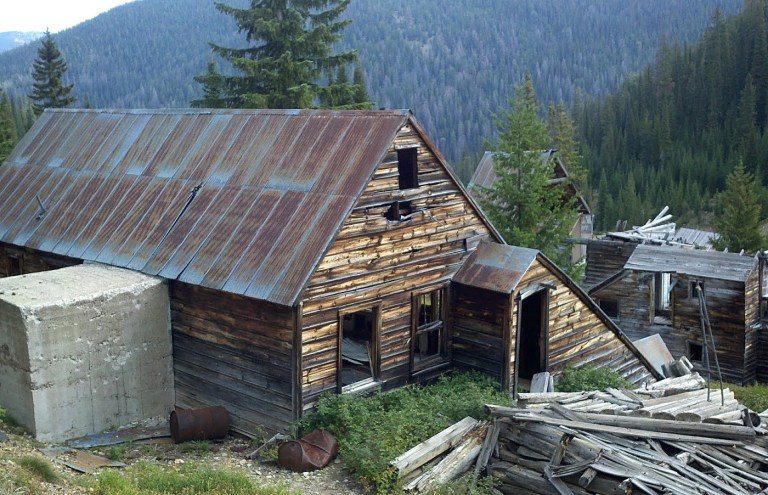 USFS Rangers Jim Egnew and Clem Pope unlawfully removed and destroyed five cabins at Cabin Creek, all of which were on the National Register of Historical Places. The USDA Inspector General’s office actually investigated the incident at Cabin Creek, but having insufficient witness accounts, they deemed the incident “likely an accident.”

It appears that Egnew, Pope, and others, have repeated violated the National Historical Preservation Act by directing the unlawful destruction of dozens of historic buildings in Stibnite and Cinnabar. But other incidents have been recorded at several ranches, and the Murder Cabin, which sits on a claim owned by Kenny and Marvin Jones. This history makes suspect the assertion that the burning of five buildings, while Jim Egnew and Clem Pope were present at Cabin Creek, was accidental.

Claim owner, Marvin Jones, maintains that he witnessed Rangers, Egnew and Pope, set fire to the bunkhouse at the Sunnyside Mine. Then, Jones says, the rangers proceeded to burn down the Murder Cabin on his own claim. These structure fires occurred during the same time period that five cabins at Cabin Creek were ‘accidentally’ burned to the ground. In this instance, the rangers reported they were “burning garbage” when the flames suddenly got away from them. There was a group of professional forest fire fighters at the site at the time, who, according to the rangers, were unable to contain the flames that consumed the cabins. Although the five cabins at Cabin Creek were in possession of the Forest Service, they were all listed on the National Register of Historical Places, and destroying them in this way was clearly against the law.

There are more accounts by Amos and others, of egregious and arrogant breaches of public trust by USFS employees in the Payette office. Free Range Report will bring to light the dishonest, and illegal processes used by rangers in the recent closing of Sugar Creek Road.