This is the fifth of a six-part series. The reader is highly encouraged to go to these websites and study what is discussed in these articles in order to make an informed decision.

My father never thought much of the government, but he was a good citizen. He fought for his country and was proud to have served. When he learned his injury wasn’t severe enough for the GI bill to help with carpentry school, well, he just sent the blank application back and taught himself. That was the kind of man he was, never expected anyone to carry the load for him. Integrity, character, honesty, and always trying to be on the right side were more important to him than what the government told him to do. Laws were not needed to tell him to respect the land and its gifts. He just wanted to be left alone to live freely, causing no harm to others.

When some juveniles shot the swans at Swan Lake he was devastated but relieved when they were caught and required to spend the next summer working at a bird refuge, hoping they would learn nature’s value and what atrocity they had committed. As much justice as possible was served but the loss of those swans was…well there was never enough justice for them. The National Park Service (NPS) policy supports the senseless and barbaric slaughter of Bison, especially those wandering outside the park. This policy and its execution are as guilty as those juveniles. There is no justification for this type of act.

During the 70’s a horrific beetle infestation went through Island Park, all the trees on his property were lost. He was livid no efforts were made to thwart the problem, not because of his loss but because of the forest destruction. One day he said, “Let’s go get a tree”. Driving deep into the forest on a back road, on forest land, I asked him what we were doing. He replied, “I want to get a Douglas Fir.” Reminding him the USFS wouldn’t like that…”Oh, come on, they aren’t going to miss a little tree”. How do you say no to your father committing tree theft? We plucked that lucky little sapling out of the ground, took it home, and planted it. He nurtured and babied that tree, gave it extra water, constantly making sure it was thriving. Knowing trees like different company, he was practicing good silviculture. And just maybe, it was his gesture to the government that the forest does not belong to the government, it belongs to us, the people, and as such, all of us are responsible for its protection, care, and survival.

It is critical to understand the massive number of organizations who are involved in this connectivity agenda and who align with government agencies to advance it.

In 2010, the Obama administration issued a memorandum, creating the America’s Great Outdoors Initiative without any federal legislation, and assigning eight federal agencies to implement it. Two objectives were the creation of “corridors and connectivity”, and advancing those “priorities through public private partnerships”. A DOI order created 22 large landscape cooperatives across the U.S. with Island Park sitting in the Great Northern Large Landscape Cooperative (GNLCC). These cooperatives were tasked with coordinating all landscape conservation groups, including partnering federal agencies, placing land into conservation, and connecting them into large landscapes. There are 56 landscape initiatives that belong to the GNLCC including Yellowstone to Yukon (Y2Y), High Divide (HD), Crown of the Continent (COC), Heart of the Rockies (HOR), Greater Yellowstone Coalition Committee (GYCC), Western Governors Association (WGA), and multiple land trusts. Here is their Steering Committee. 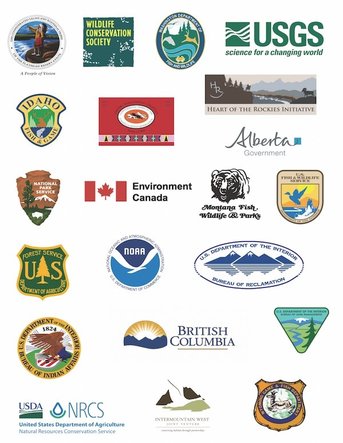 But there are other large landscape conservation groups as well.

Gary Tabor is the founder of the Center for Large Landscape Conservation (CLLN), co-founded the Y2Y Conservation Initiative, the Roundtable of the COC, and co-designed the Western Governors’ Association Wildlife Corridors Initiative. The Conservation Corridor, an International Union for Conservation of Nature (IUCN) program, facilitates wildlife corridor and ecological connectivity conservation, of which Mr. Tabor is the regional leader Vice Chair. As recent as 2016, Mr. Tabor was participating with the IUCN for Areas of Connectivity Conservation. Here is the CLLN network of partners. 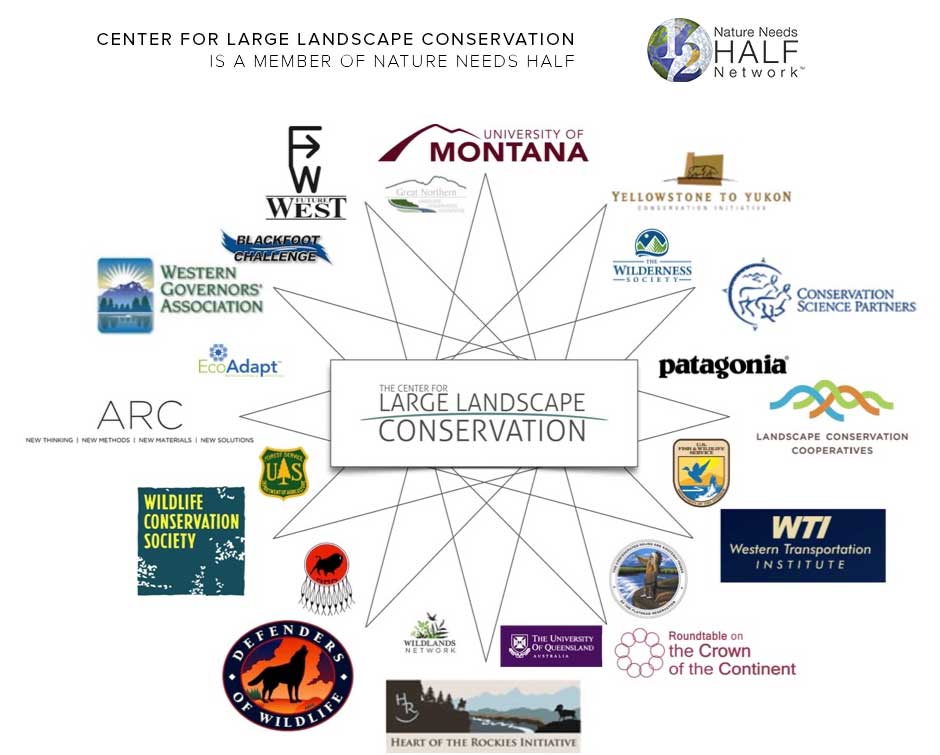 The Landscape Conservation Cooperative Network (LCCN), “is the collective of the 22 LCCs collectively”, whose council consists of the BLM, USFS, NPS, USFWS, among others; NGOs NatureServe and TNC; four international participants; and the CLLC.

The Network for Landscape Conservation (NLC), was created by the University of Montana and Lincoln Institute for Land Policy (LILP). Their mission is “helping people work effectively across boundaries to…protect…or connect natural systems at the large landscape scale…”, and support an “enduring system of protected and connected natural systems at the large landscape scale.” Gary Tabor and Michael Whitfield are on the coordinating committee. The LILP has a Large Landscape Conservation Strategic Framework for Policy and Action.

The WGA plans to launch a pilot project for wildlife mapping, identifying areas where development can occur with minimal impacts to wildlife, with Island Park being one project areas. Phase 1 includes inventorying species, habitat, unfragmented landscapes, protected habitats, and geographic features while evaluating connectivity tools and models in cooperation with NatureServe and WCS ongoing efforts to formulate connectivity best management practices. The project promises to contact all relevant stakeholders within the pilot area at the initiation of the project, including but not be limited to: Y2Y, WCS, and TNC. The project intends to hold at least 2 “stakeholder” meetings, with Island Park being one of those communities. By the end of Phase 1, they plan on having a “Completed connectivity/linkage plan identifying steps, tools, and outcomes for producing a connectivity data layer for the entire ID‐MT divide project area.” The NGOs and HD must be thrilled. No start date was listed.

As one can see, there are a substantial number of groups involved in this connectivity agenda, as well as money pouring in from wealthy individuals with the same ideology, and your tax dollar. But where are the voices whose heritage is bonded and connected to Island Park? Their voice, with first rights in importance, has been left out.

The US 20 Corridor has a website specific to the Targhee Pass Environmental Assessment (EA) phase of the project. It states ITD, following National Environmental Policy Act (NEPA) requirements, is initiating an EA to evaluate risks, benefits, opportunities and costs associated with reconstruction of Targhee Pass, with the Federal Highway Administration (FHWA) as the lead agency.

ITD has been studying the US 20 transportation corridor for 13 years, working with IDFG and the Henry’s Fork Legacy Project (HFLP), assessing its condition, and identifying necessary improvements. Three studies were conducted during that time. 2014 (Cramer) – Methodology for Prioritizing Appropriate Mitigation Actions to Reduce Wildlife-Vehicle Collisions on Idaho Highways; 2014 (Seidler) – US 20 Island Park Wildlife Collision Study – an examination of Road Ecology in the Island Park Caldera: Elk and Moose migration across US Highway 20 – Final Report; and 2016 (Cramer) – Safety Solutions for Wildlife Vehicle Collisions on Idaho’s US 20 and SH 87. Technocrats and individuals from outside the area have the lead voice here.

According to the website, it was also during this time “one-on-one conversations with local agencies, municipalities, tribes and other key stakeholders” also took place, which were used for the Targhee Pass Environmental Study. ITD states comments on wildlife vehicle collisions (WVC) were “received in the scoping phase” of the study. Aside from the IDFG, HFLP, and technocrats, who? What Tribes?

The website states the NEPA process begins when a federal agency develops a proposal to take a major federal action or (as in this case) when federal funds would be utilized to implement a project. Federal funds were approved for this project in October, 2016. So the NEPA process was started prior to the funding? What does federal law say?

§ 23 CFR 771.119 Environmental Assessments, § 771.111 Early coordination, Public involvement, and Project Development, and § 450.210 Interested parties, Public involvement, and Consultation, all require public involvement for transportation planning and actions requiring an EA. This is accomplished through an early coordination process and is incorporated into the EA which should be available for public inspection. One or more public hearings…at a convenient time and place for any…project which requires significant amounts of right-of-way, substantially changes the layout or functions of connecting roadways…or has a substantial adverse impact on abutting property are also part of the law. The state is also required to develop and use a documented public involvement process that provides opportunities for public review and comment at key decision points. What opportunity for involvement were citizens granted during the studies, or even from the beginning 13 years ago?

§ 23 USC 128: Public Hearings states, “Any State transportation department which submits plans for a Federal-aid highway project involving the by passing of or, going through any city, town, or village, either incorporated or unincorporated, shall certify to the Secretary that it has had public hearings, or has afforded the opportunity for such hearings, and has considered the economic and social effects of such a location, its impact on the environment, and its consistency with the goals and objectives of such urban planning as has been promulgated by the community.” The ITD excluded all of this. Were public hearings held regarding proposed actions on the corridor, during a time when all were in residency?

The website claims “The first step in the environmental assessment process is called scoping. This is an opportunity for the community to help identify issues and concerns specific to the study corridor.” According to their timeline, a study initiation and stakeholder assessment occurred in October, 2016. One public meeting was held in December with comments incorporated to refine alternatives and impact assessment methods in January, 2017. The subsequent April meeting was canceled. The ITD Corridor Planning Guidebook mandates public participation and county official involvement at the beginning of any proposed project. Does it sound like the public and county criteria were met? How could it be the initiation of the project when studies had already been conducted, deals were made with other agencies, and only select groups involved?

Community-based organizations are also listed as important groups for outreach. Aside from the HFLP, the majority who don’t live in Island Park, what other community based organizations were contacted? Island Park residents should give serious consideration to creating a Civic Advisory Committee for transportation decisions, separate from NGOs and select groups, for comprehensive perspectives. More importantly, this project should be started over and conducted according to the law.

The ITD has clearly failed in meeting the public involvement requirement during the transportation planning. Open houses were scheduled during months when the majority were not in residence, and when the most difficult winter road conditions existed. A public hearing was never offered during a time when all were in residency. In addition, required socio-economic factors were clearly not included in the proposal or in any of the studies. Is it possible neither the NGOs or the ITD wanted the truth to come out?

If this Targhee Pass project moves forward, Island Park better prepare for possible land use planning changes that will follow. As previously mentioned, Northwest Property Owners Association (NWPOA) went through this nightmare but successfully stopped it. Their local NGO attempted to incorporate restrictive regulations into their county comprehensive plan which included: requirements for using qualified design professionals; assessments and studies for professional design and best management practices; zoning restrictions; impact fees; development moratoriums; growth limits; and incorporation of state and/or federal laws. ScienceDirect has an excellent article, Land use planning: A potential force for retaining habitat connectivity in the GYE and Beyond, that is full of the scams taking place now, including the belief that “…counties could exert more power in controlling private land development.” Defenders of Wildlife promote using State Wildlife Action Plans to link conservation with land use planning. Both are worth reading to understand future agendas if this connectivity project moves forward.