Boulder, Colorado is considering a city ordinance that would ban the sale & possession of “assault weapons”, bump stocks, and magazines of over 10 rounds.

I’m thinking that the next ordinance the City Council should consider is changing the name from “Boulder”, Colorado to “Crazy Town.” Or maybe changing the name to “Hey Mass Shooters! Come Shoot Us Because We’re Totally Defenseless!.”

Having a city name that included multiple exclamation marks might increase tourism since it made the city seem like an exciting place to be.

Thankfully, the so-called “assault weapons ban” ordinance is not yet law. 2nd Amendment advocacy groups have already threatened lawsuits if the ordinance is passed and citizens are actively mobilizing in opposition.

America has been slowly (and not so slowly) straying from its foundation for a long, long time. However, things like this give you the feeling that we’re closer to the point of no return than ever before.

I find it strange that when a city ordinance like this is proposed, those on the Left suddenly seem to become “local, limited government” proponents.

This is just more evidence that they do not understand the Constitution or our Founding Fathers’ philosophy. Allow me to lay it out for you.

The Founding Fathers understood that in order for America to exist as a group of United States, we would need a federal government that had certain powers.

That’s why we have our Constitution.

However, the Founders were also very aware of the fact that that “power is of an encroaching nature, and that it ought to be effectually restrained from passing the limits assigned to it.” (Federalist Papers 48)

And that’s why we have the Bill of Rights.* 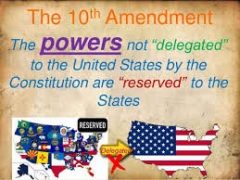 The 10th Amendment says, “The powers not delegated to the United States by the Constitution, nor prohibited by it to the states, are reserved to the states respectively, or to the people.”

And this brings us back to the Boulder City Council’s proposed “assault weapons” ban.

Sorry, City Council, But You Can’t Do That

The Constitution states, “A well-regulated Militia, being necessary to the security of a free State, the right of the people to keep and bear Arms, shall not be infringed.”

Therefore, neither do state or local governments.

Boulder’s attempt to “ban assault weapons” is blatantly misinformed and extremely ill-advised. They do not have the authority or ability to do it.

People are making the argument that the proposed ordinance would be ineffective.

They are also saying that one city banning “assault weapons” will never stop an evil person from getting an “assault weapon” from somewhere else (like the black market) and using it to kill people in Boulder.

Which is also true.

The argument has also been made that more people are killed with handguns (which are not included in this proposed “assault weapons” ban) and therefore the ordinance would not have any significant impact whatsoever.

While these arguments are all true and valid, they miss the bigger point – Boulder’s City Council has zero authority regarding this issue and therefore even if they did pass the law, it would be completely illegitimate and null.

This is the argument we should all be making. By making the other arguments about how ineffective it will be, we are conceding the point that the “assault weapon” ban could possibly have some kind of legitimacy (which it does not).

So while Boulder attempts to put its citizens in danger and change its name to “Helpless Target”, Colorado, let’s make sure we’re making the right argument and really getting the point across that our God-given right to self-defense “shall not be infringed”.

*Historical Note: Opponents of the Bill of Rights believed that it was so obvious that all people possessed the rights listed there that is was unnecessary to list them.* It was considered a given that we had the right to free speech, religion, self-defense, etc.

That may have been the case in 1787, however apparently not so much anymore in 2018.

They also believed listing them would make it seem that there was a limited number (a problem solved by Amendment 9, “The enumeration in the Constitution, of certain rights, shall not be construed to deny or disparage others retained by the people.”).