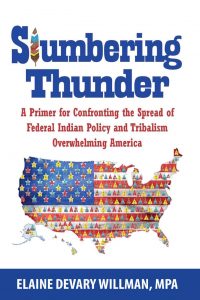 One of the most mean-spirited emotional weapons is what I call the Yesterday Stick. Here’s how it works: A long-time married couple has survived a long-ago spousal affair, but one spouse never forgets and raises that Yesterday Stick as a power tool frequently in their marriage. Or a recovering alcoholic has successfully turned his/her life around with several years of sobriety, but relatives continually remember that “we knew you when!” Or a convicted felon who has paid the consequences and transformed his/her life is forever stained with the Yesterday Stick.

Yesterday facts are unfortunate events that cannot be changed. Slavery is one. Tribalism is another. Black Lives Matter radicals rely upon the Slavery Stick to continually demean all of America’s ancestors and founders. Our country stopped this madness over a century ago, but weaponizing yesterday’s flaws today works marvelously to spread false guilt and inferiority to our fellow Americans in this and future centuries. Until we stop it. Just stop it.

The same can be said for long-ago dead Indian treaties. The legal industry thrives on conflict, so asserting ancient Indian treaty rights in the present creates instant conflict in light of contemporary demographics, towns and counties on reservations today. The Washington State “Culvert” case in front of the U.S. Supreme Court today is a prime example. The case asserts that old treaty rights are superior to state sovereignty. Yet, life has dramatically changed with predominantly non-Indian populations on reservations that include state, county and municipal jurisdictional authorities within reservation boundaries. Tribal constitutions limit their governance to their enrolled members and their Indian lands, only. That’s likely why tribal governments and the legal industry are rapidly reclaiming old dead treaty rights for off-reservation and “aboriginal” rights.

On most reservations, it is the non-Indian economy that provides abundant resources and quality of life to tribal and non-tribal reservation residents. And yet, the growing trend of reasserting treaty rights sends a message that all Congressional statutes and judicial rulings from the 1850’s forward are irrelevant, and that only treaty rights are perpetual and cannot be supplanted. What a whopper of a lie is this Yesterday Stick.

Perhaps the remedy is to actually acknowledge these treaty rights and remove all other benefits that Congress and communities have provided to tribal governments for 200 years. Restore reservations to the 1850’s – no more annual funding to tribes, no electricity, no flat screen TV’s, no cell phones, no cars, no casinos, nothing that non-tribal Americans created for the benefit of all. Return reservations to their Old Life Ways under their old dead treaties. Yes, were we to succumb to the Treaty Yesterday Stick, the irony is that the resulting lifestyle would be one Native Americans truly would not want today. Instead, we have heavily rewarded tribal government with ongoing largesse while getting sand kicked in our teeth.

“More than good motives should be required when government seeks to allocate its resources by way of an explicit racial classification system…the basic principle of the Fifth and Fourteenth Amendments to the Constitution protects persons, not groups…distinctions between citizens solely because of their ancestry are by their very nature odious to a free people.”

We are clearly not a free and equal people while racial classifications exist in any form in America. We will never be a free people while American taxpayers are indentured to annually subsidize all the basic needs of just one ethnicity— 567 Native American tribal governments.

So how are these Yesterday Sticks implemented? Within Columbia Law Professor Philip Hamburger’s acclaimed body of expertise on Administrative Law in America, we learn that the Executive Branch has created a powerful workaround that transfers power from Congress and the Courts to federal “regulatory” agencies.

There is no better example than the enormous Bureau of Indian Affairs, staffed by thousands of predominantly tribal employees, funding all basic needs of 567 tribal governments composed of a mere 0.06% of our country’s population. Yet another example is the thuggery implemented upon landowners across the country by Environmental Protection Agency, the Bureau of Land Management, U.S. Fish and Wildlife, U.S. Department of Agriculture, et al.

Each of these federal agencies has their own Administrative Law Courts. They make the rules, set the fines and penalties, impose and enforce their regulations upon persons and private properties (bypassing state authority), then stand as judge and jury when a citizen objects. The Interior Board of Indian Appeals is a prime example of an agency Administrative Law Court. Imagine any objectivity in such a court. Federal agency autonomy, coupled with their administrative law courts, is a debilitating system that far exceeds the intent of the balance of power between the three branches of government succinctly defined in the U.S. Constitution.

In addition to Administrative Law, there is the onslaught of The Diversity Principle, fueled by 156 separate ethnicities identified by the U.S. Census Bureau, each category of which sets the stage for racially- based funded programs. Diversity propaganda over the past decade has turned “Equality” into an undesirable term…now politically incorrect. Americans are consistently categorized by skin tone in a racial hierarchy that trumps our Constitutional Amendments and puts equality six feet underground.

The entrenchment of these racial Yesterday Sticks is such that their removal from our American governance would be an earthquake shift among federal and state agencies, but it can and should be done. Just suppose that all federal funding were based solely upon one single and neutral requirement—annual household income. Period. Annual household income would not involve race, religion, marital status, sexual lifestyle; nothing except household income. It would simply be a calculation of the number of persons within an American household, and an established poverty income threshold level. That simple. Such fairness would collapse race-based programs throughout the maze of federal and state agencies, including the Bureau of Indian Affairs. The simplicity of Annual Household Income would eliminate most, if not all, of the Yesterday Sticks, and restore the principle of equality to its rightful place in this country. No American household in poverty would be ineligible.

Remedy will not come easily, but could begin with an Executive Order that requires elimination of all race-based federally funded programs within a reasonable time; perhaps two to three years. Congress could then follow the lead of the Executive Branch and ensure that America ceases its racial preference funding.

Tribalism is communalism based upon race, and was never contemplated as a governing system in the U.S. Constitution. Communalism is socialism, antithetical to the government our Founders provided. The federal government should return back to the tribes all lands acquired by tribes and donated to the federal government to be held in “trust” title by the United States on behalf of Indian tribes. Tribally owned lands should be restored to the authority and jurisdiction of the state, like all other lands ceded to the states upon statehood.

The severity of tribalism and diversity Yesterday Sticks is truly kneecapping equality and individual civil rights in this country. It is not too late to end these debilitating forces, but if nothing is done, it soon will be too late.

Elaine Willman, MPA, served from 2002 – 2007 as National Chair of Citizens Equal Rights Alliance (CERA) an organization of community education groups and citizens in 25 states who reside within or near federally recognized Indian reservations. She is a retired career municipal administrator, pursuing a doctoral in federal Indian policy and author of Going to Pieces: The Dismantling of the United States of America (2005) and Slumbering Thunder: A Primer for Confronting the Spread of Federal Indian Policy and Tribalism Overwhelming America (2016). Email her at toppin@aol.com.

Things To Live And Die For

Workers Are People, Not Mice