In this multipart series on being an effective conservative we’ll look at the term conservative in the context that it is commonly used, “I am a conservative.” I am going to cover 4 aspects in this article.

For those who espouse an adherence to the Christian faith, the Bible and the descriptions of Christ’s life is our standard. The interesting aspect of our biblical standard is that none of us actually meets the standard, it rather reveals that we all are failures when measured against it. (that’s another article!) Francis Schaeffer elaborated on our biblical Christian standard when he wrote the “Christian Manifesto.”

We can see why having standards and setting standards in areas of our life and interactions with one another are useful and important to daily lives. 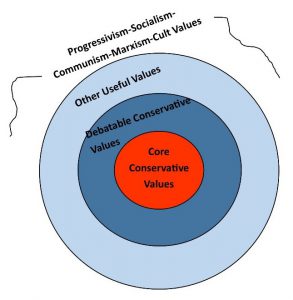 Aspect #1 When we say conservative, we must ask, “what is the “conservative standard?” Before we attempt to answer that, let’s discuss the reality of conservative positions in light of other values.

From interfacing with many conservatives over the years as well as examining my own use of the word, I’ve had to figure out where we all might be coming from. I’ve met Tea Party, Constitutional and Republican Conservatives who embrace what I consider core values but also have political and social values not necessarily tied to core conservatism. I’m not trying to say this first graphic is anything more than an observation from my own perspective and there may be other ways to depict these variations in conservatism, but it seems to me conservative thought can be described in core values that degrade outward to very undesirable and contrary values.

Aspect #2 But it’s more complicated than this graphic, because I’ve also met people whom I know were solidly core value conservatives, but made decisions that made no sense whatsoever. In thinking about it I could only make an allowance for how that could occur by malicious cancers or pollution that the person allowed in, which pushed aside core conservative principles. In essence they lost sight of what mattered and sacrificed the good cause of conservative values for personal or selfish reasons. 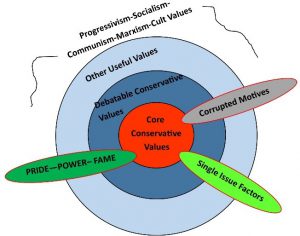 Aspect #3 is the double standard. These conservatives believe that the core standards do not apply to them. In essence, they believe they get a pass around adhering to core conservative values while still being justified in wearing the term. An example is they really never produce any results, or the results they do produce are lukewarm but still ascribe to our tribe. The reality is we have many practitioners of the double standard.

Aspect #4 This identity puzzle is still more complicated by the failure of conservative groups, some true political conservatives and other entities to actually fact check the words uttered by so-called conservatives, or to otherwise embrace “newbie” conservative talkers based merely on their words. Snake oil sales are always highest in new towns where there is no history of its prior use, so too with new candidates running for office. With no results and no history, some within conservative ideology are quite easily duped, conservative leaders, organizations and media not only buying their snake oil, but get behind them in helping sell it. This causes disarray and confusion within the conservative community for a period of time until it gets fettered out.

Many of the people I have voted for in the past proved to be disappointments from the standpoint of results. The most valid question we as voters can ask, is what have you done on the record and in public to further our cause for freedom and liberty? Would we hire a homebuilder without first seeing the quality of what he has already built? It is my position that until we have historical proof of a person has been a conservative “activist”, they are really at best conservative “pacifist”, which is worthless against the activist driven liberalism/socialism plaguing America. With the tsunami of liberalism, there are many areas for every conservative to be publicly active in defense let alone going on the offence.

Now let’s circle back to aspect #1. Defining core conservative values has been done before as early as 1937. In more recent times a manifesto of sorts was offered in book form. I offer these not by any authority to do so, but as a participant. As such, some of these values may be viewed controversial or the list found lacking.

In no particular order:

After God, the “We the People” are sovereign,

God gave us freedom as an inalienable right, all individuals have a right to freedom,

State rights are more sovereign than federal control and federal power is limited,

Good government is healthy when in conflict with itself and not always in agreement,

Individual responsibility is required of all participants,

Our human condition is one of imperfections and chapters of brokenness, which should breed essential humility and an awareness of evil and selfish pride,

An obligation to morality and rule of law is essential to all people and all governments,

For truth to prevail, justice must be blind to corrupt influences, all men/women are created equal,

Apathy leads to decay in all areas, conservative traditions must be taught and practiced,

National identity is to be preserved,

The family is the building block of any good society,

Pursuit of the American dream, does not mean everyone will achieve it,

Equal opportunity rather than equality,

Constitutional superiority and it’s not evolving,

Bill of Rights is not negotiable,

Entrepreneurism – Capitalism is a good system, but does have some abuses,

Punishment for crimes is necessary for civil order,

Tradition mixed with vision and potential,

Hopefully readers are stimulated to give thought to how we collectively define core conservative values. One way to measure the value of any element is to ask ourselves what it would mean if it were absent from our core values. It is worth noting that various movements enjoin aspects of the conservative standard by making it their own. We have “Christian conservatives,” “Constitutional conservatives,” “Social conservatives,” “Fiscal conservatives” and so on. These special identity groups have taken freedoms to modify the core values with values they deem equally important in describing their tribe.

In this 7-part series of articles, my goal is to stimulate our thoughts and to provide clarity for what being conservative might really mean and more importantly how we can be a better example of it. The take away should inspire all of us to be better at being a true conservative. Email info@bob4idaho.com Part 3 is “What Pollutes/Dilutes the Conservative Movement.”