“… urban planners have long believed that too many Americans live in single-family homes and they think more should live in apartments or condos.” — Randall O’Toole, CATO Institute

Spokane’s annual Citizens’ Alliance for Property Rights (CAPR) banquet was well attended on Saturday, May 5th, and a resounding success. The beef buffet dinner was superb, the program appreciated by all and all had a good time.

Well-known Spokane city councilman and radio talk show host from ‘The Right Spokane Perspective’ on 630 AM Mike Fagan and his co-host Tim Benn MC’d the event.

Candidates for upcoming elections, current and former office holders in the city, county, and state were introduced and many of them spoke pledging support for CAPR. In turn, CAPR acknowledged appreciation for past support of many present.

Eastern Washington CAPR chairman Cindy Zapotocky stated, ‘We had four award winners. We had Senator Mark Schoesler who really stood up tall in our legislature this year. He had been in the majority a long time and then he was in the minority. He worked hard and defended our water rights and we are real proud of him.

“Our second award went to Washington State Senator Shelley Short who has one of the best voting records in our state is pro-property rights and we wanted to thank her. 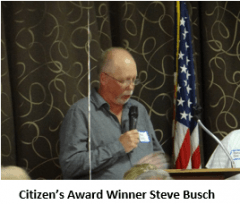 “We also had two citizen activists who are very hard-working for the citizens and they were Ruth Ryan whose specialty is elections and then we had Steve Bush who is a recovering environmentalist who is an expert on animal management, grizzlies, and wolves. So we have wonderful people with which we are working.”

Jim Wentland from the Spokane County Cattlemen acknowledged that they just had a wonderful dinner of beef. He then warned everyone that the new thing coming is fake meat. It’s supposed to be on the store shelves this year.

Wentland also said that there is strength in numbers and CAPR needs all the help it can get as does his cattlemen’s group.

Mike Fagan mentioned that Washington is the most trade-dependent state in the union. “We have been getting our backsides handed to us with regard to some huge opportunities that we had with some terminals over on the west side. We are now looking at a big campaign ahead of us with regards to an issue that exists with the BNSF railroad and Pend Oreille Lake. We are looking at easing congestion further facilitating the transportation of goods and things to that effect.”

Bruce Boram from Keep Washington Competitive announced that there will be a public hearing in Sandpoint, Idaho on May 23rd and there are lot of issues around that in Washington State related to rail.”

“There is an on-going assault on this most important privately funded trade and transportation infrastructure we have in the state and in this country” reported Boram. He then invited the attendees to a special meeting on the subject on May 15th.

DAVID BOLENEUS ON THE CANADIAN TAKEOVER OF AVISTA 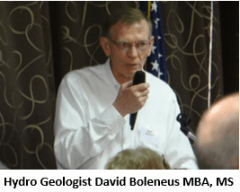 Well-known hydrogeologist and author David Boleneus MBA, MS, spoke briefly on the looming sale of Avista to Canada’s Hydro One. He pointed out that the hearings for the Avista sale are coming up in our area. He stressed the importance of reviewing the matter and responding before it is too late.

“The reasons we don’t want Hydro one started is they have a very poor operating record in Ontario. They are strongly criticized by the local press there and right now they’re supposed to be privatized, but only to 60%.

In 2009 the province of Ontario passed the Green Energy Act. So you can imagine what that will mean to us.”

“Once the best and most efficient system in North America, we will soon be relying on wind generation for electricity. The rates last year in Ontario were 36 cents per kilowatt-hour. That’s five times what we have here. Their rates are going higher and they are the fastest growing rates in North America.

“They are now about equal to the world’s ties in Germany and Denmark. They rose actually 6 times faster than the consumer price index in Canada. They have something called a global adjustment charge which is something we never heard of where they pass on all the extra costs. 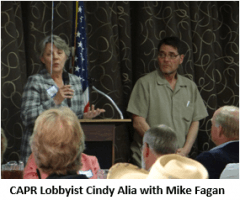 Boleneus stated that Hydro One in Ontario disconnected 58,000 customers who couldn’t afford to pay their bills. He said that right now there are 292,000 people in arrears. “The rates of actually come down a little now to $0.26 a kilowatt hour but by the time they go back in 10 years they will go up to $0.60 a kilowatt hour.”

She said that time is so limited in Olympia with busy people that her new tactic is to give a lot of very short messages. She vowed to continue doing the best job she can representing CAPR members. 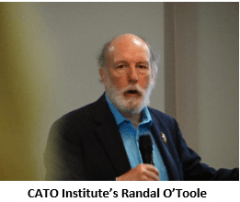 Giving the keynote address was Randal O’Toole, author and Senior Fellow of Transportation from the CATO Institute.

Pointing out how state money has been wasted on fancy bus stations that don’t take anyone anywhere themselves and overspending on much larger and more expensive buses than are needed wastes an enormous amount of taxpayer money where they most often could have purchased minibuses. “Spokane has now bought 60-foot long bending buses that cost about $640,000. They are diesel powered however and that’s not good enough,” he reported that they say.

O’Toole told the story then about how after seeing a battery-operated version of this type of bus at a tradeshow in Japan selling for over $1.2 million, Spokane officials came back making plans to purchase one which was only stopped by President Trump’s refusal to participate in the purchase with federal money. To which Cecily Wright a devout Trump supporter and the new chairman for the Spokane County GOP’s Central Committee was the first to applaud with a loud “Yea Trump!”

“So how do you make war on the single-family home? In Portland, they drew an urban growth boundary around the city which includes parts of 24 cities and parts of three counties and basically, you can’t develop outside the city.

“Outside these boundaries, the laws vary by state, in Oregon where I am most familiar with, you’re not allowed to build a house on your own land if you live in a rural area unless you own at least 80 acres of land. That’s not enough. You actually have to farm it and that’s not enough. You actually have to earn, depending on the soil productivity, between $40,000 and $80,000 a year farming it in two of the last three years. If you meet all that criteria, they actually will give you a building permit to build a house. And they’re very proud that they’ve only had to issue about 100 building permits a year in these rural areas since these laws were passed in the 1990’s.

“Inside the urban growth boundaries, they go into single-family home neighborhoods and rezone them for apartments. The zoning you’re familiar with is maximum density zoning: You can only have four units per acre, or eight or two units per acre or 1 unit per 5 acres, or something like that. 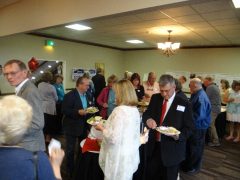 “They are now using minimum density zoning where you have to have at least 20 units per acre or 30 units per acre or whatever. If your house burns down you’re not allowed to rebuild it, you must build an apartment building. They call this infill development.”

He said what the planners really want is Greenwich Village and they are actually incentivizing builders to build multi-unit structures on spare lots and backyards wherever possible to meet that end.

O’Toole pointed out that the USDA numbers say we have 1.1 billion acres of agricultural land in private holdings in the United States. That doesn’t count federal and/or state land. Of that 1.1 billion acres only 350 million are being used for growing crops down from 420 million acres in 1980. Is it down from urban sprawl? No. It’s because crop yields have been growing faster than our population. Per acre yields have been growing rapidly and they will continue growing rapidly with new techniques.

He concluded, “So we don’t need to save farmlands. That doesn’t mean we need to threaten farmers and it doesn’t mean we need to convert farmlands. It means that farmers can hold their own. Farmers can do what they need to do as best they can without having urban growth boundaries protecting them from the encroachment of urban areas. But really, what they do, is they prevent them from developing their lands for the highest and best use.”

He also said another reason they try to use for substantiating these controls is global warming.

Speaking on the results of the event, Zapotocky said, “We really are pleased tonight with the event that we had. We had some wonderful participation and good support for our Citizens Alliance for Property Rights.”