Thank you, Kanye West. You have inspired me with your courage. Kanye tweeted out to millions of his fans about his love for President Trump. He reported, “Blacks don’t have to be Democrats.” Then he quoted Thomas Sowell (a black conservative). Another black rapper quickly agreed.

Is black America better off now than when Lyndon Johnson passed “The Great Society”? $25 trillion spent on welfare and poverty programs—and poverty is in the same place. Maybe worse for black Americans.

How about Obama? What did he do for black America? Lots of talk. But was anyone lifted out of poverty? Have the murders on the streets of Chicago, Detroit and Baltimore gotten any better? Actually, they all got worse under Obama.

Are the public schools working for black kids? As Diamond & Silk would say, “Uh uh, no way.”

But here’s the thing. I’m 100% Jewish—both parents, both sets of grandparents. And I see Jews making the same mistake as black Americans. Drinking the same Democrat Kool Aid.

I’m going to be the Kanye West of the Jews.

I’m going to scream it from the highest mountaintops…

“JEWS DON’T HAVE TO BE DEMOCRATS.”

This isn’t something new for me. I was profiled by CNBC in 2003. They called me “the King of Vegas” and the leading sports handicapper in America. When they asked me what my number one goal was—I said, “To become the leading Jewish Republican in Nevada and convince Jews across America to become Republicans.” The CNBC anchors almost fainted.

When I was at dinner at Maralago earlier this year, I told President Trump the same thing. I explained to the President my goal is to travel this country on his behalf, speaking to Jewish groups and convincing them to vote Republican.

And why not? What has the Democrat Party ever done for Jews? That’s the number one question I get from fans and callers on my national TV and radio shows. They say, “Wayne, why do your Jewish people vote Democrat? It makes no sense. Can’t you convert them?”

I’m going to make that case in many of these columns over the coming months.

Jews are brilliant people, talented people, and educated people. They believe in family, they believe in God, they love America—the only country (besides Israel) in world history that ever welcomed them. They are ambitious, self-reliant, successful and business-oriented. I’m betting a higher percentage of Jews own businesses than any other group in America. 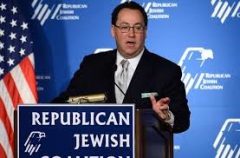 Jews are all about achievement. They have achieved mobility in America like no other group. My father was a blue-collar butcher, yet my sister and I both graduated Columbia University. You know the odds of that? Amazingly, I personally know hundreds of Jews with that same story of mobility, striving for excellence and over-the-top success.

We didn’t get there by mistake. There was no luck involved. No one gave us anything. We earned it. The story of the remarkable success of the Jewish people is all about education, family, God, work ethic, personal responsibility, ambition (we call it “Chutzpah”), discipline and sacrifice.

Those are all the exact traits, beliefs and principles of the GOP. Government owes you nothing. “If it is to be, it is up to me.” As a matter of fact, the Jewish people always achieved success throughout history in spite of government. Government isn’t the answer. It’s up to you. Your brain. Your ambition. Your discipline. Your personal responsibility. Your work ethic.

And then there’s President Trump. He boldly stands behind Israel like no president in history. He just moved the US Embassy to Jerusalem. The Jews of Israel love him. They are naming parks, train stations and even a soccer team after him. If you love Israel, Trump is your guy. And the GOP is your political party.

Just as Kanye West advised to black Americans, it’s time to break away from old thinking. It’s time to think out of the box. How your grandparents voted doesn’t matter anymore. It’s time to create a new future.

The Jewish People are already perfect Republicans. We are the living embodiment of what the GOP stands for.

No, “Jews Don’t Have to Be Democrats.”

Actually, it boggles my mind and defies common sense that any Jew, anywhere, ever votes Democrat!