We’re still weeks away from the day in January last year when Donald J. Trump ascended to the presidency and took his oath of office as the 45th President of the United States of America.

Yet, in less than twelve months, he has already had an extraordinary presidency – more bold, courageous, and revolutionary in many ways than any American president since the Founding Fathers almost two-and-a-half centuries ago.

I use the adjectives “spectacular” and “extraordinary” not only to describe the sheer ebullience and optimism the president exhibits every day at his impossibly daunting job – and in spite of nonstop vilification by an angry, bitter, jealous left – but mostly because his accomplishments in both domestic and foreign affairs have been so stupendous for the American people.

“Haven’t you been reading the papers and watching TV?”, the pathetic Never Trumpers grouse. “If you had,” they insist, “you would have seen clearly that the president has had just about no accomplishments!” 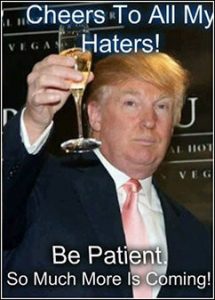 Of course, if I depended on the media whores at CBS, NBC, ABC, MSNBC, CNN, the Washington Post, the New York Times, National Public Radio (NPR) – the list is long – I would be forced to believe the avalanche of fake news which consistently fails to give even passing mention to the president’s laudable achievements.

But one of the genius things candidate Trump accomplished before he was elected and entered the Oval Office was identifying the colossal phoniness of the so-called mainstream media.

Jim Hoft, proprietor of Gateway Pundit, reports that according to Wikileaks, at least 65 mainstream-media reporters met and coordinated with top Hillary Clinton advisors during the 2016 presidential campaign. Below is only a tiny sampling of what a friend of mine calls partisan prostitutes: 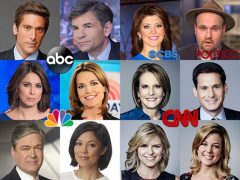 All of these shills worked closely with the Clinton campaign, were invited to top elitist dinners with Hillary Campaign Chairman John Podesta and Chief Campaign strategist Joel Benenson, and in every case were given an “off-the-record” agenda which was blatantly and fawningly pro-Hillary. NOTE: Significantly, no fair-and-balanced Fox News reporters made the list.

It wasn’t only fake news that militated against candidate Trump. It was also the leftist polling companies that consistently reported “fake” numbers right up until 8 p.m. on election night.

But whaddaya know – in spite of a massive coordinated blitz of negative reporting, candidate Trump’s message resonated with the entire country, which awarded him the presidency!

Last May, I wrote about “The Juggernaut and the Jerks,” in which I described the formidable inroads the juggernaut president had made on behalf of America, as opposed to the drumbeat of negative “press” he received from the jerks in the media.

Now that the November 8th anniversary has passed since Donald J. Trump’s historic upset election and President Trump is approaching the one-year date of his inauguration on January 20, 2018, it is fitting that I close out my assessment of his first year in office.

There is a very good reason why President Trump, long before he ever contemplated a run for the presidency, became a multi-billionaire in the real-estate industry and one of the most successful TV stars of the 20th century. It is simply because he’s smarter than most people – definitely than most politicians – and he has that X factor of charisma that is missing in most of the nearly eight- billion people on earth.

Brains and charisma, in his case, equal the ability to get Big Things accomplished – combined with the charm to convince even his rivals that what they originally thought was a bad idea is, in fact, a good idea. And this is not to omit his ability to play the kind of hard ball that is reminiscent of the NY Yankees’ 27 World Series championships!

Case in point. The President just proclaimed that Jerusalem was the official capital of Israel, after just about every president since 1948 campaigned on a promise to do so and never delivered. Most people know instinctively that Jerusalem has long been the capital of Israel, since Jews have lived in the Holy Land for over 3,000 years and Jerusalem is mentioned in the Bible over 600 times, in dramatic contrast to the Muslim’s holy book, the Koran, which mentions Jerusalem NOT ONCE!

Following the president’s pronouncement, 128 of the corrupt leaders and tin-pot-dictators in the United Nations condemned the declaration. But unlike past U.S. presidents, especially the poseur “president” Barack Obama, who had a peculiar fetish for anti-Semitic dictators, President Trump said, really? You don’t want to vote with the country that supports you to the tune of billions of dollars every year? Okay…it’ll cost you. Hard ball!

And sure enough, UN Ambassador Nikki Haley immediately negotiated a $285-million cut in the amount of money the United States would contribute to the UN budget – yes, only a 3.5% cut, but just watch the next vote – and if it’s again against America’s wishes, watch the next cut!

Meanwhile, within days, the president of Guatemala, Jimmy Morales, announced that he would move his country’s embassy to Jerusalem. And shortly after that, Deputy Foreign Minister of Israel, Tzipi Hotovely, announced that at least 10 more countries joined the growing list of those who intend to move their embassies to Jerusalem.

I credit each and every one of them with helping me compile the following list of President Trump’s mind-boggling first-year accomplishments. But because of space constraints, it is only possible for me to mention a portion of the smashing successes the president has brought about since his inauguration. Believe me, this is only the proverbial drop in the bucket!

In contrast to Breitbart writer John Nolte’s description of Mr. Obama’s “anti-growth policies and anti-free market rhetoric,” President Trump, he says, has taken “complete ownership of the American economy” – including:

In domestic policy, David Prentice of the American Thinker says, “We’ve experienced a miracle in our day that a lot of us thought we might never see again.”

For starters, President Trump has:

In addition, the president has:

Bruce Thornton, of frontpagemag.com, notes that President Trump “has begun to repair the damage to our international prestige wrought by” the poseur president’s “one-world, naïve internationalism favored by progressives, who want to diminish America’s global clout.” In that regard, the president has:

President Trump removed the poseur president’s crushing Rules of Engagement in combat, which tied the hands of our military and resulted in both greater combat and civilian casualties. And he empowered military leaders to “seize the initiative and win,” reducing the need for a White House sign off on every mission.

According to James Lewis of The American Thinker, when President Trump dropped the Mother of All Bombs (MOAB) in Afghanistan, “a hundred or more of the worst human beings since Hitler died in one big explosion,” and both our allies and our enemies knew there was a powerful new sheriff in the United States. “Obama would never even name the enemy,” Lewis says, and he “never, ever seemed to get that basic point of morality, nor did Hillary, nor did any other Democrat. Trump and Mattis obviously understand it….”

Journalist Rick Moran reminds us that today, ISIS has lost 98 percent of its territory and that now fewer than 1,000 ISIS fighters remain in Iraq and Syria. And Fox News reports that number is down “from a peak of nearly 45,000 just two years ago. U.S. officials credit nearly 30,000 U.S.-led coalition airstrikes and regional partners on the ground for killing more than 70,000 jihadists.

In addition, President Trump signed the National Defense Authorization Act for fiscal year 2018, which approves one of the largest defense spending increases in the past 30 years. The NDAA does the following:

THE BEST IS YET TO COME

Conservatives like me knew one thing after observing the poseur president Obama after his very first month in office – i.e., that the worst was yet to come.

Sure enough, for eight long years, we witnessed a remarkable avalanche of apologies for America, non-stop race baiting, the evisceration of our military, and a virtual devolution of everything positive America stood for. 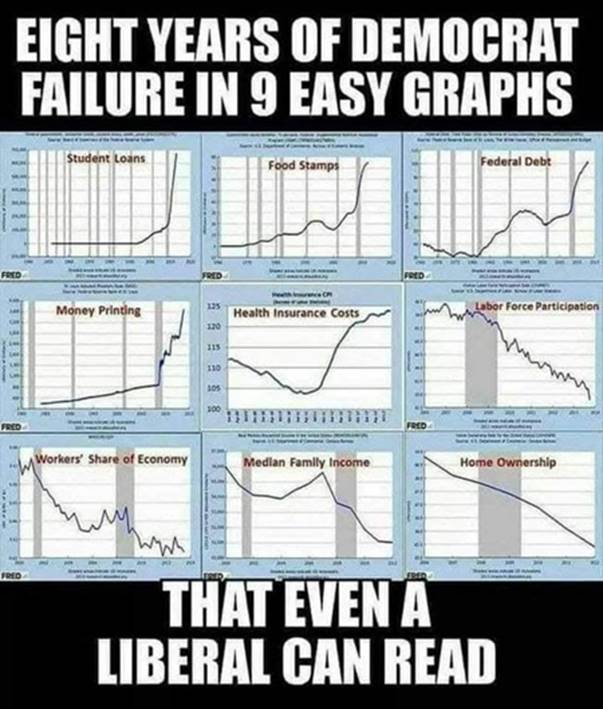 After the big-hearted people of America gave a socialist community organizer with not one microsecond of executive or foreign affairs experience a chance to lead the greatest, strongest, most generous country on earth, those same big-hearted people regained their sanity and voted for an American patriot with vast executive experience to seize the reins of power and – literally – save both America and Western civilization!

For those of us who value safety, a strong military, a booming economy, high employment, the sanctity of life, and a reverence for the U.S. Constitution, the election of Donald J. Trump was a godsend.

And we fervently believe that under his leadership, the best, indeed, is yet to come!