We “need to do something” about school shootings! We need “Gun Control!” What to do? I am a largely retired civilian and law enforcement trainer who now does expert witness testimony in use of force cases primarily. I have a lengthy 30 year plus background as a civilian/LE trainer throughout this country as well as overseas.

GENUINE SECURITY AND SAFETY MEASURES MUST BE RATIONALLY DISCUSSED

Unless we can do away with emotional histrionics and rationally discuss genuine security measures including the role firearms play, we will see more security failures and loss of innocent life. I have also been a professional firefighter for 38 years including 30 years as a paramedic. Because of training people in first aid and CPR over those years I found many parallels in training people to protect themselves in both arenas.

It is pretty much known that using citizen CPR, first aid including controlling bleeding, use of fire extinguishers, etc., is an accepted norm to teach citizens. Why? Response times. It takes time to get to the scene of an emergency. It is well known that survivability of patients is dramatically increased when people already on the scene are “doing something”, like CPR or other first aid. This fact is irrefutable.

Remember, when seconds count, we (cops or firefighters) are just minutes away. If we teach the use of a gun as analogous to a fire extinguisher or first aid kit, then we see why a citizen can “hold the line/do something” until the police arrive. Whether a medical emergency or your door is being kicked in at zero dark thirty, the principle is the same. You are on your own and must rely on yourself to protect you and yours until we get there. This is life or death. This cannot be delegated. You have seconds to act decisively. There are not enough cops or Fire/EMS personnel to protect everyone all the time.

As a matter of fact, this is why years ago the U.S. Supreme Court ruled in a suit against a police department by three women that police are not obligated to protect an individual citizen, but only protect “society as a whole.” This is known as Doctrine of Sovereign Immunity. Again, it is because cops cannot be everywhere at once, hence no liability when they cannot save someone as was the case for those three women. 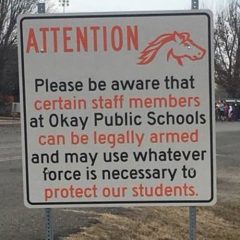 Security measures are multi-faceted. A gun may play a role in security planning and that decision should be up to the potential victim, not a bureaucrat who usually has no knowledge of the topic. This is America and we are supposed to have free choice, especially when it comes to decisions related to life, liberty, and the pursuit of happiness. If we lose life then the rest is moot, no matter someone else’s “good intentions.”

A cop certainly wants to stop a bad guy, of course, but most responses are after the fact. We wouldn’t need cops if just passing a new law to “do something” worked. There are bad people out there who will abuse whatever tools to kill and maim. We have cops because use of force by them against violent actors is what they train for. That is why it is called a Police Force, not Fluffy Police. As we saw in the recent Florida school event, police performance doesn’t always work out as hoped, or as is “sold” to the public. This is sometimes just the nature of the beast.

I am glad to see the security changes implemented by schools to protect our kids, however, that is not enough. We have opened Pandora’s Box in making schools and other public venues “gun free zones.” This is a magnet for mentally ill people who harbor violent thoughts. Such criminals who lived have told us as much, that they picked “gun free zones” over places with obvious security because they would face no opposition.

There was a bank robber in the 1930’s named Willie Sutton who was asked why he robbed banks. His response was reported to have been, “Because that is where the money is.” He later said that he never made that quote, but had he been asked, that is what he would have said, because “it made common sense.”

All these “gun free zones” defy common sense. This concept is relatively new in America. It is time to quit this failed social experiment that is costing kids/teachers and other citizens their lives and allow those that are willing and capable to be armed discreetly so that they can actually do something to deter and/or stop an attack. This has already been proven to work in many instances in American schools and churches but goes unreported by the general media as a rule. It is a person’s life at risk and it is rightfully their choice in how they protect it and others under their mantle of protection.

The right to keep and bear arms precedes the Constitution and Bill of Rights and is based upon English Common Law. That right is not granted by or dependent upon those documents. This right of free human beings existed before firearms were invented. Millions of citizens are already carrying judiciously now, and it is time to stop infringing upon their fundamental rights with the tragic and predictable consequences of that infringement.