It’s time to drop the myths, pseudoscientific suppositions, and incomplete studies that have prevented effectively solving Salmon passage from the ocean to the spawning grounds.  The dams are in place and the culture of the Northwest has developed around them. Without hydropower and irrigation water from dams agricultural and development of Southern Idaho would be limited including the Treasure Valley. It’s been 60 years and $17Billion wasted paying experts and attorneys with negative results.  This debacle is a matter of reliance on and failure to research previous flawed reports.  The conservation and environmental groups in a pretense of saving the Salmon, are aiding in their annihilation.

The water temperatures of the Columbia, Snake, and Salmon Rivers appear to be a natural condition that apparently existed prior to settlement. Frankly, not even the EPA has understood the fact that water temperatures of the rivers above the dams exceeds 70-75F or 15.56C during the spawning periods. The EPA has set an unsupportable temperature for Cold Water Salmonid Spawning at 13.5C or 56.3F. This temperature is not attained during anadromous fish spawning times south of the Clearwater Rivers or in Stanley Basin. Red Fish Lake averages 17.8C or 64F during spawning.

Backpacking trip along the Boise River shows the extent of water pollution in Idaho.


Supporting this, USGS monitoring sites have been recording these temperatures prior to global warming. Two chosen recording sites operated by the USGS above the dams are posted below and clearly show the temperatures during the summer months when the salmon spawn. (July 15-October 15)

The first, records temperatures for 20 years at King Hill, Idaho on the Snake River at 23C and 73F. This site was chosen, as it is 12 miles downstream from the Bliss Dam, and 300 miles above the Dams in question. It represents the temperature of the major tributary springs flowing into the Snake from the Snake River Plain Aquifer. They are recorded at 59F or 15C year around on the sites of the Niagara Springs Steelhead Hatchery, the Clear Springs Private Fish Hatchery, and the Federal Hatchery in Hagerman Valley. 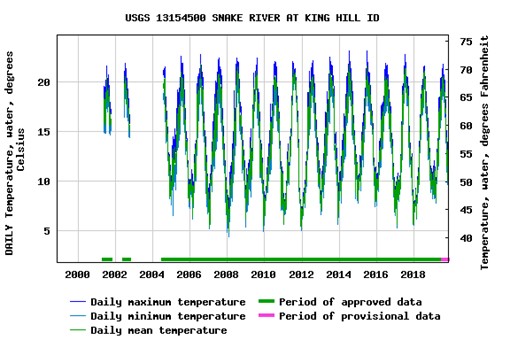 The second at White Bird on the Salmon River 23C and 75F. Also 20years. This clearly identifies the natural temperature as there are no dams on the free-flowing Salmon. 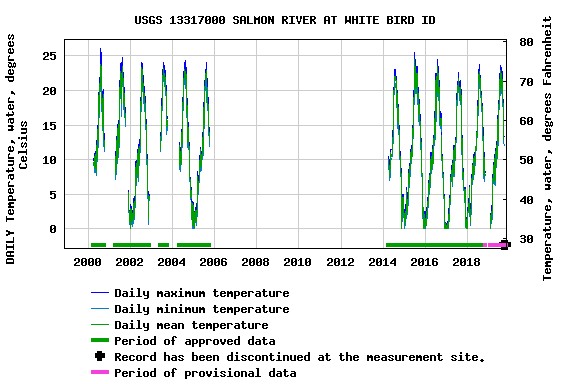 No amount of work or expenditure will lower the water temperature of these rivers to 56.3F during spawning and supporting this, the atmospheric temperature worldwide has only risen 2.1F in the last 120 years. As the fish exist, they obviously have adapted to these temperatures, but not the slack water of the dams. The answer appears to be the moving water of a river.

A solution saving the existing economies allowed by the Snake River dams and Salmon recovery would be to reconstruct a river around the dams that would allow the salmon to reach their historical spawning grounds unimpeded. The design should provide shade, pools and riffles to cool the water similar to a natural riverine environment.  This would provide a continuous flow of water by-passing the slack water of the dams from the spawning grounds to the ocean.  The water required is 400-600 CFS and is less than Idaho’s required annual allocation of 487,000 acre feet used for spilling water over the dams to move smolt down river. Without this the Sockeye are doomed.

I have been advocating this solution for over 40 years and all I get is ironic, condescending smiles from the “experts.” Your solution is not only the correct one, but in view of what has been spent on this problem, the most cost effective. I would however suggest that you may have over estimated the amount of water to do this. Remove the dams? God save us!