The Russian indictment is a ruse!

Russia has been plying their espionage trade since their beginning because obviously that’s what they do and we in kind also do the same because we must try to counter their efforts.

So now, all of a sudden out of nowhere in the quiet world of clandestine affairs big bad Robert Mueller STRIKES!

Some might say Muller’s abrupt decision to indict 13 Russian nationals and three Russian organizations for committing federal crimes while seeking to interfere in the United States political system, including the 2016 presidential election is a pure stroke of genius. Maybe, but it is also a big fat ruse knowing he can’t really prosecute any of them since Russia will certainly not extradite them. The action is pure smoke and mirrors except it is really the tool to launch a cute little ploy to further legitimize the continued dogged pursuit by the establishment of our Trumptastic President.

Why the Russian ruse? Because Mueller had nothing going on in his ‘trumped up’ effort by the deep state to find anything to charge our President with after over a year of wasting a lot of taxpayer dollars, nearly $7 million in only four months. So this grand exposé of indictments serves as a showpiece for all to see, as though his efforts produced something and more importantly presented the opportunity to say no Americans (like in no Clintons) were involved in it

As Judge Andrew Napolitano pointed out on Fox News, “The NSA is thorough in its listening to conversations and capturing e-mails. Why didn’t they capture this? Why didn’t the FBI know what was going on? ‘If you know, Jim Comey, that this is happening, why didn’t you stop it?’ This went on from 2014 to 2017. It was never stopped. For all we know, it is still going on now.” They all knew, Judge. And so did, naturally, the all-knowing Obama who probably directed it.

Special Counselor Mueller has filed a new indictment against a London lawyer named Alex Van Der Zwaan, the son of a Russian oligarch for allegedly lying to the FBI. And now a federal grand jury in Virginia has filed a new 32-count indictment charging ex-Trump campaign Chief Paul Manafort and aid Rick Gates with federal tax and bank fraud allegations. The charges, stemming from special counsel Robert Mueller’s investigation, include federal tax and bank fraud allegations. The concept here being, of course, to try to get lawyer Alex to roll over on aide Rick to roll over on ex-campaign chief Paul to roll over naturally on The Donald. The scheming will never end until it’s ended by the President or Congress.

Mueller and his band of miscreant deep state lawyers need to be disbanded by President Trump and he will endure that decision because the majority of Americans see straight through this fake pursuit of justice and it has only survived this long as the result of being propped up so far by the reporting of the fake news by the Main Stream Media. Shut these dangerous vermin down now Mr. President so you can continue unabated to MAGA. 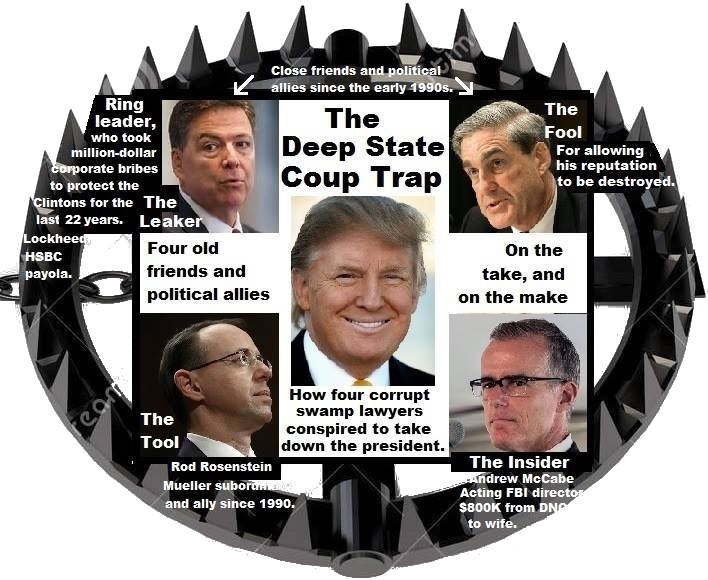