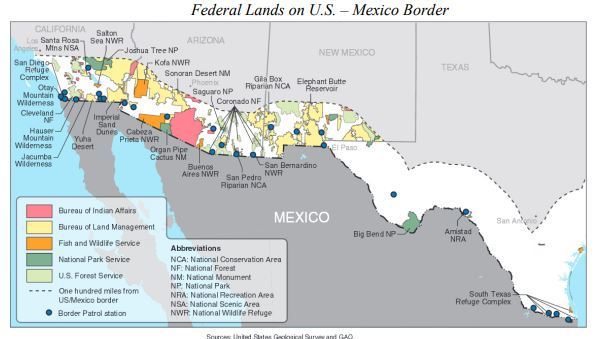 “Illegal migrants, human traffickers, and drug smugglers, whether crossing by foot or using vehicles cause substantial damage to the natural and cultural resources found on federal lands. Tremendous amounts of human waste and garbage are left on borderlands every year. Medical supplies, diapers, clothing, and even broken-down cars are all left behind.”

On February 9, the House Committee on Oversight and Investigations held a hearing on existing regulatory impediments to securing the southern border. One of the topics addressed is the checkerboard of ‘sensitive’ wildland designations in states along the border with Mexico. The Border Patrol and other law enforcement agencies are unable to gain ‘operational control’ of large regions of the border due to such designations and their accompanying prohibitions on access. The hearing memo, titled “The Costs of Denying Border Patrol Access: Our Environment and Security” explains:

This oversight hearing will focus on the access challenges faced by Border Patrol agents on federal borderlands and the environmental impact of illegal border crossings and drug smuggling.

See the hearing video below

The House Oversight hearing explored the environmental impact of illegal border crossings, which is largely ignored mainstream media. The memo includes these facts:

Illegal migrants, human traffickers, and drug smugglers, whether crossing by foot or using vehicles cause substantial damage to the natural and cultural resources found on federal lands. Tremendous amounts of human waste and garbage are left on borderlands every year. Medical supplies, diapers, clothing, and even broken-down cars are all left behind on federal borderlands. Throughout the borderlands, trash strewn lay-up points, staging areas where illegal immigrants and smugglers discard waste in preparation for being picked up by vehicles, are a common sight in dry river beds and washes.

In Arizona’s southern region alone, the Bureau of Land Management reportedly collected and removed 794,320 pounds of trash between FY2011-2016.21 The Arizona Department of Environmental Quality estimates that each year 2,000 tons of diapers, plastic bottles, and other
garbage is left behind by CBVs. Garbage and human waste from CBVs has been identified as
one of the major contributors to pollution in the San Pedro River, where volunteers cleaned up more than thirty temporary camps set up by CBVs in 2008 alone.

CBVs are also responsible for man-made wildland fires started on the border. According to the Government Accountability Office (GAO), between 2006 and 2010, illegal immigrants and drug traffickers were likely responsible for 30 out of 77 investigated wildland fires on federal lands.
High levels of CBVs complicate fire suppression efforts and forces firefighters to change tactics. For example, nighttime firefighting activities may be reduced due to firefighter safety concerns of encountering armed drug and human traffickers. Moreover, coordinating aerial firefighting operations along the border is more difficult because CBVs often use the same radio frequencies as firefighters.

In addition to the massive volume of trash and dangerous man-made wildfires, illegal border crossings inflict serious damage to vegetation and species habitats. Like the loss of life and threat to public safety, the environmental cost of illegal immigration and smuggling is a constant concern. The Public Lands Foundation’s states that “the smuggling of controlled substances and people into the United States from Mexico is increasingly causing substantial and oftentimes irreparable damage to natural and cultural resources on federal, tribal, and private lands along America’s southwest border.”

The U.S. Fish and Wildlife Service (FWS) identified mass illegal immigration as a likely contributing factor in the 79 percent decline in the U.S. Sonoran pronghorn population between 2000 and 2002 at the Organ Pipe Cactus National Monument. FWS’s report on the Cabeza Prieta National Wildlife Refuge, which shares 56 miles of border with Mexico, used high
resolution aerial photography to map 7,968 miles of vehicular trails associated with illegal border
crossings in the refuge.

FWS also found that “the amount of damage from off-road activities [in Cabeza Prieta] may be
significantly impacting the natural quality of wilderness character . . .” through erosion, changing plant distribution, destruction of wildlife habitat, and soil compaction. Given the environmental threats of CBVs, FWS recommended increasing personnel and horse patrols as well as deploying more technological assets in Cabeza Prieta.

Decades of environmental degradation due to mass illegal immigration through wild lands, including national monuments and national parks along the America-Mexico border is well-documented. In 2002, Julie Watson (AP) reported the following:

Wilderness areas on both sides of the U.S.-Mexico border are taking a beating from an onslaught of migrants, drug traffickers and law enforcement officials, a new study says. Some national treasures in both countries have been lost forever.

Last month, Pinacate and Organ Pipe officials completed the borders first environmental impact studies of illegal activities. The findings were eye-opening: It could take 20 years to recover from the damage, while some archaeological sites are gone forever.

The Arizona Department of Environmental Quality documents environmental destruction on the border on its page, Arizona Border Trash. It explains:

The collection and disposal of waste in remote areas along Arizona’s 370-mile border with Mexico poses difficult challenges. An estimated more than 2,000 tons of trash is discarded annually in Arizona’s borderlands. A variety of federal and state government entities, Native American tribes and private landowners are affected by the problem, and addressing it requires extensive coordination.

The environmental impact caused by illegal immigration, and the trash left behind, is increasingly being found in areas that are more fragile and remote. 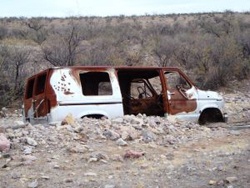 Desert Invasion U.S. has used photographic and anecdotal evidence to document the terrible environmental and human destruction that has resulted from the open-borders policies of recent years. The environmental impacts have come from the trampling of vegetation, desert soils, pollution of springs and seasonal streams, and tons of garbage left by illegal immigrants consisting of plastic containers, tarps, backpacks, clothing, human waste, drug paraphernalia and other forms of trash.

The website features an article by Ed Ashurst, an Arizona rancher whose property is on the border, which details the kinds of destruction he has personally witnessed.  Among those incidents were numerous fires set by illegal aliens which burned over 100,000 acres in the fragile desert landscape.

The following images of illegal immigrant-related environmental destruction can be found on Desert Invasion U.S.

In 2011 the Government Accountability Office (GAO) released its report on wildland fire funding. The part played by illegal immigration in wildland fires is significant. It says:

Over half of the land in the Arizona border region is managed by the federal government–primarily by the Department of Agriculture’s Forest Service and four agencies within the Department of the Interior. These agencies collaborate with state, tribal, and local entities to respond to wildland fires.

GAO was asked to examine, for the region, the (1) number, cause, size, and location of wildland fires from 2006 through 2010; (2) economic and environmental effects of human-caused wildland fires burning 10 or more acres; (3) extent to which illegal border crossers were the ignition source of wildland fires on federal lands; and (4) ways in which the presence of illegal border crossers has affected fire suppression activities. GAO reviewed interagency policies and procedures; analyzed wildland fire data; and interviewed federal, tribal, state, and local officials, as well as private citizens.