Ever wonder why the price of NFL football game individual and season tickets are so prohibitively expensive, as well as the high price of official NFL gear sold on the internet or in sporting goods stores? Ever wonder why the NFL has gotten away with not disclosing the dangers inherent in the sport, and has colluded among team owners to hide this from the players and the public – despite their having access to top-notch sports physicians on their staff? I can go on and on.

Indeed, were the NFL not subject to an antitrust exemption granted to it by our compromised Congress, thanks to the sport’s lobbyists having spread “beaucoup” money all over Capitol Hill, the club of uber-rich owners who make their own rules with impunity could be charged under RICO, the Racketeer Influenced and Corrupt Organizations Act, for price fixing, market division and other illegal anti-competitive acts. As a former Justice Department Antitrust Division prosecutor who was on the trial team that broke up AT&T during the Reagan administration for price fixing and market division, take it from me!

For the owners of the NFL teams which have dominated much of our culture, it comes as no surprise that they would support the players on their teams who find it their “duty” to kneel when the national anthem is played. Last Sunday, several teams, such as the Seattle Seahawks, Tennessee Titans, and Pittsburgh Steelers, with the owners’ consent if not complicity, saw fit to even up the ante, and took it a disrespectful step further and refused to come out of the locker room until after the national anthem was played. These owners acquiesced to this outrage because without these players, they would not have a team to profit from – so they wrongly believe. The owners are not just profiteering hack elitist tycoons, but cowards. Forced to choose between respect for our nation and our veterans who gave their lives to protect and preserve our freedoms, and instead sided with a growing number of their own high priced arrogant players who jingle the change each weekend for them, much like Judas they elect to sell out the country, and collect and bank their “30 pieces of silver.” 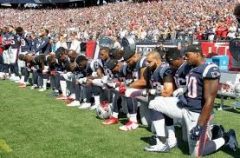 President Donald J. Trump was both right and courageous to take this issue on. This is what separates The Donald from every other president in American history! Even President Ronald Reagan, who I loved – I still tear up when I take a day off and go to the Reagan Library in Simi Valley, California, and see video of his speeches – would not have stuck his neck out to this extent. It’s time that an American president not worry about being polite! In today’s world, I prefer a commander in chief who tells it like it is, and advocates hard remedies.

Thus, President Trump was right to advocate firing these rogue players, boycotting NFL games, and suggesting that fans simply walk out when these unpatriotic players kneel, refuse to come out of the locker room when the national anthem is played, or do other acts disrespectful to our nation. In my humble opinion, this destructive conduct, which sets a bad example as well for our country’s youth, is not so much about race and discrimination against African-Americans, as it is about anti-patriotism. Nor is it a matter of First Amendment rights!

A football game and the NFL is a commercial enterprise and fans pay for the right to participate by going to or watching games on television, or buying sports gear. If players wish to protest the whatever ginned up discrimination claims of the likes of President Barack Obama, former attorneys general Eric Holder and Loretta Lynch, Black Lives Matter, Al Sharpton, Louis Farrakhan of the Nation of Islam and other agitators have misleadingly sold to them for political gain, they can protest on any street corner or public park in the United States, at their time and expense, rather than on our dime. Fans simply did not pay for disrespectful behavior toward our brave servicemen, and others going all the way back to our Founding Fathers, who fought and risked and gave their lives to create a free nation. And, Betsy Ross did not design our Stars and Stripes, nor Francis Scott Key compose our Star Spangled Banner, to see them effectively spit on at our expense at NFL games!

But I also recommend that President Trump, at the urging of supporters such as you and me, put pressure on Congress to revoke the antitrust exemption that NFL team owners, with campaign contributions, “bribed” senators and congressmen to obtain. In this way, not only will NFL owners have to play by the rule of law and cease price fixing and dividing television, radio, internet, retail and other markets – all of which is otherwise per se illegal under our competition laws – but also teach them a real lesson. And, by revoking their antitrust exemption, this will create competition and lower the price for fans to proudly attend games and buy gear in support of their, not exclusively the owners’, hometown teams.