A basic economic fact teaches that all new wealth springs from the ground, whether grown or mined. America has been blessed with amazingly abundant natural resources, plus the freedom to access and develop them. From the beginning, this combination set us apart, propelling America to a world power. The current lack of freedom and mismanagement is stifling America, especially in the West.

In 1803, Thomas Jefferson doubled the size of America’s land with the Louisiana Purchase of 530 million acres equaling 23% of the United States.

Today, the federal government controls 640 million acres or 28% of all the land in America. Only China and Russia rival America in this centralized collective socialist approach. In the East, less than 5% of the land is in federal control but over 50% of the twelve Western states are still in colonial status. Idaho is 62% federal land and Nevada 87%. By comparison, New York is 3% and Texas 1.8%. For a country founded on the principles of Freedom from an oppressive, distant government this stands in stark contrast.

The federal government continues to gobble up private property through outright purchase, donations from land trusts, even eminent domain use by the NPS. Each time private land becomes federal land, the county and state tax bases suffer. When communities lose access to natural resources they become more dependent on the federal government. Business has been replaced by government agencies. In Portland, Oregon only 13% of the jobs are government-based. Harney County, Oregon jobs are now 49% government.

Even though the Western states have had the distinct disadvantage with a majority of federal land, we were able to somewhat compensate through reasonable access to timber, minerals, and grazing. Until passage of Federal Land Policy and Management Act (FLPMA) in 1976, the federal government had slowly disposed of land in following the states’ admission acts. When the federal government decided to retain all remaining lands, dramatically increase restrictive regulations and use the Antiquities Act to set aside huge chunks of land it signaled a War on the West. President Reagan’s years offered a reprieve, but the Clinton and Obama Administrations stepped up destructive policies, severely harming the West. 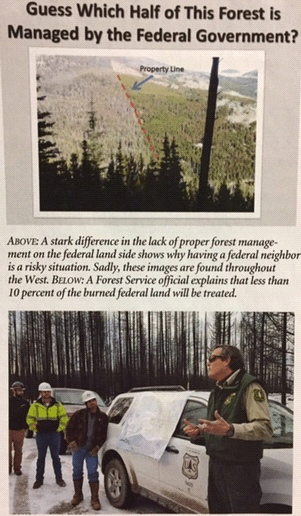 Timber sales ground to a stop, cutting off jobs, shutting down mills, and bankrupting family businesses. In Idaho, has one surviving mill south of the Salmon River. California lost 100 of their 140 sawmills. Once-thriving timber towns have become reservoirs of hopelessness with too many remaining residents living on government assistance as their children drift into drugs and dependency.

The 25% timber receipt funding counties relied on for schools and roads vanished. The few replacement stewardship contracts and good neighbor authority timber sales do not contain the 25% provision. Secure Rural Schools falls far short, leaving counties to twist in the wind at the mercy of Eastern Congressional votes.

Today we burn up our forests instead of responsibly harvesting this renewable resource with America the world’s number two importer of softwood products. Each year, millions of acres in our unmanaged forests are destroyed by raging wildfires consuming everything in their path, including towns, pumping untold tons of toxins into the air, blackening our skies for months and threatening our health.

In a recent US House hearing, USFS Chief Tidwell stated 82 million acres of the 193 million USFS acres need restoration and funding. Congressman Tom McClintock (R-CA) retorted if only 1/3 of the USFS land had proper timber harvest using sustainable forestry, the result would be a $15 billion revenue stream each year.

Congressman McClintock pointed to the vast pine forest of the Sierra National Forest, adjacent to Yosemite, that is 85% “Christmas-tree-in-July-dead.” The entire West is an ocean of burned, dead, or dying trees from this terrible mismanagement. A stark contrast can be seen between the sick federal land and the healthy managed state and private forests.

Ranchers have faced similar attacks with severe cuts to grazing and nonsense regulations designed to drive them out of business. Federal bureaucrats from thousands of miles away make arbitrary decisions for land they have never seen, affecting an industry about which they know nothing. Family ranches are forced to sell to the federal government for pennies on the dollar, similar to the ranches around the Oregon Malheur Refuge. Harney County, Oregon, where the refuge resides, is 75% federal land.

Due to the lack of private or state land for grazing, ranches are dependent on federal grazing permits. Most ranches grazed on that same land long before it was USFS or BLM. Through the Taylor Grazing Act, ranches have federally-adjudicated grazing preference rights, used for loan collateral, estate taxes are charged, and go with the ranch’s private property at sale. Ranches also hold state water rights, a property right, on the federal landscape.

Mining in America is a shadow of its former self. Idaho is very rich in rare earth mineral reserves, vital for our national defense, but none are being mined. Today, America is forced to rely on China for those minerals.

Mining companies have fled America or sold out to Canadian companies. Regulations and environmental lawsuits have made it nearly impossible to operate.

Central Idaho has a gold mining area that has produced millions of ounces of gold since the 1880s. Three years ago, a company explored and found profitable amounts remaining. Over 300 local people would have been employed with very good paying jobs lasting an estimated 20 years however, environmental lawsuits stopped the project and killed those opportunities.

Recreation has not been spared the iron hand of the federal government. Throughout the West, road and trail closures and obliterations have drastically reduced access to federal lands. A recent Montana legislative report found 20,000 miles of roads on federal lands in Montana have been blocked since 1995. Even nationally recognized and protected historical trails have been destroyed by aggressive federal bureaucrats. In Lincoln County, Wyoming the Lander Cutoff Trail was established in 1857 as part of the Oregon Trail. It was recently obliterated and obstructed by USFS employees in their quest to keep the public from accessing federal land.

Utilizing products from the earth & cultivating the land are powerful instruments to increase a state’s money quantity and quality of life. Denied essential access to natural resources has inflicted unacceptable harm to Western people, communities, and states. Instead of using our natural resources, Western states have slowly resigned their independence and sunk into the degraded condition of a colony becoming dependent on crumbs from the federal government for everything from education to infrastructure.

The 2012 US Supreme Court ruling on the Affordable Care Act gave state legislatures a clear road map to exert their power through federalism. “The independent power of the States also serves as a check on the power of the Federal Government by denying any one government complete jurisdiction over all the concerns of public life, federalism protected the liberty of the individual from arbitrary power. In the typical case, we look to the States to defend their prerogatives by adopting “the simple expedient of not yielding” to federal blandishment when they do not want to embrace the federal policies as their own. The States are separate and independent sovereigns. Sometimes they have to act like it.”

Will Western state legislatures re-assert federalism and take control of their Constitutional powers in the 9th and 10th amendments? Will they finally stand up, say ENOUGH, and demand full statehood with control of the land within their borders? Will legislators follow Alexander Hamilton’s admonishment to stand and stop the tyrannical exercise of federal power over states? Will the citizens demand legislators fulfill their oath of office and stop acting as agents of the federal government? We must either demand full statehood and federalism or abandon all pretense of being sovereign states and a Free people.