Peruse the Opinion page on any given day and invariably there’s a liberal writer taking insulting and personal digs at President Donald Trump. It seems the moment anyone in his administration is accused of something akin to poor temperament or sexual misconduct – it immediately goes right back to Trump as setting a poor example for the GOP and Americans.

They’re basically suggesting if Trump’s a cad then he tolerates bad behavior all around him.

Maureen Dowd went off the deep end at the New York Times over the weekend, “We want our president to be a moral beacon, not a ratings-obsessed id. We want a president who understands that sexual and physical abuse are wrong. As a more lucid Trump tweeted in 2012 about Rihanna getting back together with Chris Brown, ‘A beater is always a beater.’

Dowd didn’t stop there but you get the picture. Trump stirs up the worst in liberal commentators…it’s scary. If Trump further calls for due process from the accusers the diatribe starts all over again.

We’re used to it by now; everyone knows the president’s got an interesting past and it will follow him the rest of his days in the White House. Liberals won’t let it lie because…well, what else do they have to pin on him?

But when it comes to scrutinizing their own quixotic stable of Democrat leaders there isn’t quite the same treatment from liberal media types. Objective observers should see today’s most prominent Democrat politicians as a collection of ideological oddballs and socially awkward hypocrites — but somehow liberals don’t associate them with image destruction in the same manner as those Republicans who stand too close to Trump.

Take Nancy Pelosi as a test case. The San Francisco-based House Minority Leader turns 78 next month and is notorious for saying outlandishly stupid things. A case in point was Pelosi’s speech (the longest in House history) last week staunchly defending illegal aliens. During her talk Pelosi relayed a story about her grandson wishing he had brown skin like a “Dreamer” friend of his. America is about free speech, right? But let’s face it, Nancy is nuts.

That’s good – for Republicans. Pelosi’s nuttiness could be the best thing going for the GOP in this year’s House elections since hardly anyone outside the shadow of the Golden Gate Bridge wants her anywhere near the Speaker’s gavel in the next Congress.

Salena Zito of the Washington Examiner wrote, “Pelosi’s speech, mostly stories read from ‘Dreamers’ – the children of illegal immigrants brought here by their parents and caught in a political firestorm between both parties – was red meat for the Democratic base. But perorations on behalf of illegal immigrants are unlikely to excite the independents, swing Republicans, and centrist Democrats whose votes will determine control of Congress.

“Similarly tone-deaf were her warnings last year that the Republican tax cut was the apocalypse. ‘It is the end of the world,’ Pelosi told reporters after the bill passed, ‘This is Armageddon.’

“And calling the $1,000 bonuses that more than 3 million American workers have received ‘crumbs’ for the past few weeks was also not helpful.”

The Republicans’ best midterm campaign strategy might be to buy TV airtime for Madame Pelosi to speak her mind about anything she desires. Some folks just have a knack for turning people off and there’s no one better than the screechy old crone from the cradle of American liberalism to do the trick. Pelosi opens her mouth and you almost expect bats to fly out. How such a wealthy privileged woman developed her punitive and negative worldview is a mystery to everyone.

Needless to say, Pelosi isn’t the only Democrat who’s hopelessly out-of-touch. Select at random a member of the Congressional Black Caucus and chances are you’ll draw a kook who thinks demanding Trump’s impeachment is a smart political move. Believing such a thing may guarantee reelection in heavily African-American districts (where 90 percent of the voters are Democrats) but outside of urban areas such views are considered off-the-wall.

Then there’s 2016’s biggest surprise, Vermont Senator Bernie “senile old coot” Sanders who developed quite a following thanks to the Democrat party elites’ decision to allow Crooked Hillary Clinton to run essentially unopposed as their presidential nominee. Sanders technically isn’t even a Democrat — but his self-styled “socialist” label flutters the hearts of the party’s young base as though the original Beatles just arose from eternity to play at Shea Stadium again.

Sanders is doing his fair share of media events these days but it’s behind the scenes that he’s perhaps making the biggest impact.

Jim Geraghty wrote at National Review a couple weeks ago, “As the 2018 midterm-election cycle heats up, the effort to transform [Bernie Sanders’ 13 million voter] army into a force is advancing in fits and starts. It has been more effective at influencing the party rules than at sweeping its preferred candidates into office.

“‘It’s a little like the Howard Dean movement on steroids,’ says Brad Todd, a political strategist who was the lead consultant behind the National Republican Congressional Committee’s strategy to retake the House in 2010. ‘The story’s been written about the traditional Republican-party leadership being overthrown by Donald Trump. What hasn’t been written as much is the story of the traditional Democratic party run by Hillary Clinton, John Kerry, and Al Gore being overthrown by people who don’t care to call themselves Democrats much.'”

It’s true – Sanders sure scared the bejesus out of Democrat leaders two years ago; the unapologetically grouchy anti-establishment socialist nearly pulled it off, too. Sanders’ momentum was ultimately thwarted by then-DNC chair Debbie Wasserman Schultz and people like Donna Brazile putting on the fix for the former first lady – the Democrat ruling class wasn’t about to let Hillary fail again after she went down in flames to Obama so dramatically in 2008.

The party’s archaic nominating rules (which incidentally Sanders’ “Our Revolution” was successful in changing for 2020) ensured that “super delegates” would tip the nomination in Clinton’s direction in 2016. The entire primary process was a joke on the Democrats’ side.

The Democrat establishment couldn’t stomach having Hillary defeated by a man who looks and speaks like he belongs in the dementia ward of a rest home…they might’ve been right about that.

Democrats are fond of predicting how badly Donald Trump will reflect on the GOP’s candidates at election time yet would someone like Bernie Sanders be a positive influence for Democrats? We already know Pelosi is like stone boots to the party’s running House candidates. And lest we forget the specter of Crooked Hillary still lurks in the background as well.

Some friendly voices say it’s time Hillary moved on from her 2016 disaster. Joanna Weiss wrote at Politico Magazine, “[Hillary] could dive into the private sector, creating a market solution for any number of problems. She could follow Gore’s path and take on a single cause as a public advocate. Naysayers be damned, she could run for office again. She’s the same age as Romney—and younger than Joe Biden.

“The point is to drop any public grumbling about the past, or calling out of Trump in outraged tweets, or stirring up partisan fury by mocking Trump in public. (Though at least her cameo at the Grammys, reading a passage from ‘Fire and Fury,’ redeemed itself with a self-deprecating joke: ‘The Grammy’s in the bag?’) There are plenty of people willing and able to analyze the 2016 race and point out the absurdities of Trump. Clinton doesn’t need to be a voice in that mix. She has the chance to go down in history as much more than the almost-first-woman-president. It starts with changing the subject.”

As might be expected Weiss’s article is much more charitable to Hillary than the vanquished Democrat deserves. If 2016’s voters cast her aside armed only with the knowledge of the Clintons’ sordid past dealings, what would they do now with all that’s come to light during the investigation into Hillary’s and the DNC’s patently false Steele dossier?

There’s still a lot left to learn, too. Hillary should probably keep the focus on her crying over the 2016 election because the next pantsuit she’s fitted for just might feature stripes. If the evolving data trail reveals that the corruption went all the way to the top, where would it leave Hillary? Even the Clintons would be hard pressed to overcome that kind of truth. The entire “Russian collusion” narrative is collapsing around them since it appears the intelligence community took their “meddling” storyline from the discredited dossier. 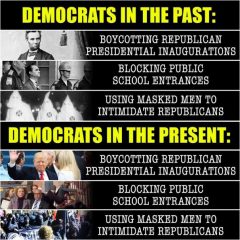 Where’s proof the Russians had anything to do with the election, and if they did interfere, in what capacity? Sooner or later the persuadable portion of the American electorate will wake up to the fact they’ve been played – and it’s going to get ugly for the Democrats.

It could happen as early as this November. #NeverTrumper David French wrote at National Review, “The Democratic party is charging left at breakneck speed. Any meaningful immigration enforcement is cast as racist. Likely Democratic presidential candidates are racing to embrace single-payer health care. Every meaningful Democratic constituency is now solidly progressive on identity-politics issues.

“In other words, moderate or swing voters have to swallow more and more extremism to cast a vote for a Democrat. They’re consistently making it harder for Americans to join their team. If the Democrats truly believe Trump is a unique threat, why can’t they moderate any of their policies? Why can’t they do anything meaningful to reach out to the center?

“That’s why the fortunes of the party are at a 100-year low. That’s why Democrats can’t yet be completely sure that even an unpopular, divisive president will hand them control of the House. They have nowhere to go but up, yet they are the ones keeping themselves down.”

French doesn’t mention it but the crazy cast of characters running their Democrat show isn’t helping the party’s image. Democrats may still enjoy a slight lead in the generic congressional ballot but I’m guessing when push comes to shove later this year Americans will recognize a vote for a Democrat candidate only means more prominence and a bigger megaphone for Nancy Pelosi, Bernie Sanders, Hillary Clinton and company to dribble out more lies and unrealities.

Everyone knows Republicans have issues of their own. Recent events proved the party has completely abandoned fiscal restraint and there’s an internal struggle for the direction of the GOP with Trump right in the center of it. Compared to the Democrats, however, Republicans look sane.