“Because we have no government, armed with power, capable of contending with human passions, unbridled by morality and religion. Avarice, ambition, revenge and licentiousness would break the strongest cords of our Constitution, as a whale goes through a net. Our Constitution was made only for a moral and religious people. It is wholly inadequate to the government of any other,” wrote President John Adams in a letter to the officers of the First Brigade of the Third Division of the Militia of Massachusetts on October 11, 1798.

This famous Adams quote – or at least the “Constitution was made only for a moral and religious people” part – came to mind recently as the steady stream of sexual harassment allegations sprung forth from scandal craved news media agencies all-too-happy to report them. The downfall of Minnesota Democrat Senator Al Franken last week was largely brought about by the wave of hysteric blurbs about his free license groping of numerous women (and they’re just the ones who’ve actually said something) in the past two decades.

Franken’s gone (or about to be). Good riddance. He is clearly just as awful a man as he was a senator. It shouldn’t be forgotten how prominent a role the sleazebag former Saturday Night Live comedian played earlier this year in grilling numerous Trump nominees about their supposed ethical deficiencies during their senate confirmation hearings. If only we’d known then what we know now Franken might not have drawn so many kudos and commendations from the pundit class.

A majority of Franken’s fellow Democrat senators, perhaps led by his female colleagues, jumped on the bandwagon of those calling for his departure. The fact that as a group they’d so often ignored similar behavior in the past concerning any number of Democrat politicians is beside the point. Were the Democrats finally discovering a newfound respect for things like morality and religion, two virtues necessary (according to Adams) for the sustainability of the republic?

Somehow I doubt it. It took Democrats a healthy amount of time to join the angry mob of noose-carrying morality enforcers going after those accused of sex deviancy and Franken’s exit came just a few days after the impetuous forced “retirement” of another proven Democrat moral leper who just happened to be the longest-serving member of Congress, Detroit-area Rep. John Conyers.

If Democrats really cared about anything other than the political ramifications of these various scandals they would act with due diligence to root out the other prospective perpetrators in their midst, for certainly there are more to be had. Which Democrats are hiding behind their desks this very moment waiting for their own date with the public inquisitors?

Wouldn’t party members be better off taking Adams’ advice and calling for the reinstitution of morals and religion in society, good things that used to teach men how to be men without disrespecting their female associates and treating them like “property” to be expended for a cheap thrill and then discarded – or paid off in a hush operation by their own employers?

Looking around you can’t help but notice there isn’t a whole lot of morality or religion to behold in Congress or even in the greater American culture these days. It’s true the Supreme Court held oral arguments in a very important religious liberty case last week but there are other clues indicating the government and our society haven’t quite gotten the message.

ESPN.com reported, “Roger Goodell has signed a five-year contract extension to remain the commissioner of the NFL, according to a letter obtained by ESPN.

“A source told ESPN’s Adam Schefter that the new contract would be worth $200 million over the life of the contract — about $40 million annually — if owners approve all the bonuses and all the incentives are met. The new deal runs through the 2023 season.

“The base salary of the new contract is in the single-digit millions, a source had told Schefter. Roughly 85 percent of the total potential compensation package is from bonuses, which would be subject to ownership approval and validation.”

No need to worry, Roger. The vast majority of owners are too afraid of being bludgeoned by the politically correct thought police to deny you your extra “bonus” millions. Here’s thinking you’ll be paid every dime in the contract and then some — probably.

The ESPN report made it sound like NFL owners were behind the extension though the Dallas Cowboys’ Jerry Jones made his displeasure with Goodell widely known throughout this controversial season full of American flag protests and player spectacles. In addition to the plainly obvious fan relations problem, the league is also battling louder and louder outcries over player safety concerns, particularly brain injuries.

This year is hardly the first time Goodell has been called out for his questionable governance, having suspended – or failed to suspend – various players for a wide variety of offenses at different times. It’s all seemed fairly arbitrary on Goodell’s part and the blame belongs with him for his inability to articulate league-wide policies that would dispel the appearance of favoritism or incompetence.

For example, the NFL endured a hailstorm of criticism a few years back when it failed to act immediately in the case of Baltimore Ravens running back Ray Rice after a video surfaced showing the player punching his fiancé in the face (in an elevator) and then dragging her semi-conscious body out of camera view.

As if the Goodell-led NFL cares about morality and the image it conveys to impressionable youth in this country and around the world. Is anyone buying it? The players’ thuggish behavior (on and off the field) has been tolerated for years. This isn’t new. If you’re a criminal and can run a 4.3 forty the football monopoly will find a place for you – at least until the law steps in.

All along during Goodell’s tenure the league’s revenue and popularity grew. The ESPN report denoted “Goodell has earned $212.5 million since he was elected NFL commissioner in 2006 as Paul Tagliabue’s replacement. The NFL paid Goodell nearly $32 million in fiscal year 2015, the last year for which public records exist.”

The fallout from this year’s fan boycott of the NFL is yet to be fully realized so it won’t be known for some time how lasting the damage has been from the enormous public relations hit teams have sustained under Goodell’s lack of leadership and action in dealing with the small group of players who simply won’t abide by unambiguous rules and stand for the national anthem. 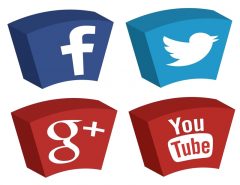 Meanwhile, original flag basher Colin Kaepernick isn’t going away and every time he appears in public he draws a crowd of media cameras and microphones waiting to record every word he has to say, no matter how inane and ridiculous. And if by chance there isn’t a willing media member within hailing distance certainly there’s someone who’s more than eager to spread Kaepernick’s words like cancer via social media.

There aren’t any moralistic restraints on the internet these days either as just about any absurd rumor or fantastic untruth can find its niche on the electronic pages of Google, Facebook, Twitter or YouTube. The masters of the online universe don’t seem to have control of it, either.

To say it’s gotten out of hand is an understatement. Jim Geraghty of National Review wrote last week, “There are two ways to address the open sewer that now runs alongside the information superhighway. We can either collectively recognize that Twitter, Facebook, YouTube, and Google are not in the news business, and that the material posted upon them doesn’t deserve to be trusted without verification.

“People didn’t put great public faith in the truth of declarations found on random handwritten signs on telephone poles or bathroom-stall graffiti, or broadcast by any old voice heard on ham radio. Americans gradually stopped believing the emails from lost Nigerian princes promising millions in exchange for their bank-account information; we can develop a similar appropriate skepticism about what we see on some random Facebook page.

Geraghty concludes his piece by arguing the inventors of the social media giants didn’t anticipate all the ramifications stemming from their creations. Just as the Wright brothers could not have foreseen that their flying machines would someday lead to the carrying of weapons so powerful they could potentially destroy the entire planet, tech giants didn’t realize their platforms would one day create the conditions for the utter destructions of news ethics and culture.

As I’ve suggested before, think back to a time before smartphones and you’ll see a world barely recognizable today. People talked to each other, left messages on answering machines and actually had to work at the art of communication. Today, by contrast, it’s post a message on Facebook and put off a person-to-person encounter until nothing else will substitute.

And needless to say, fewer and fewer people are going to church. Religion, morals and faith are so yesterday in our sensory overloaded culture. Some of it has to do with leaders of certain Christian denominations bowing to politically correct pressure to condone moral deterioration brought on by leftist movements like same-sex marriage and accepting openly homosexual clergy.

To these folks right is no longer right; wrong is no longer wrong; for many, the Ten Commandments have devolved into the ten “suggestions” to be ignored and passed over whenever the situation or passions calls for it. Many of our political leaders are complicit in the deterioration, seemingly frightened to wear religion on their shoulders for worry of offending secular humanists or members of other faiths.

Thank the Good Lord for Donald Trump – the Judeo-Christian ethic now has a place in the White House again. He may not have a perfect personal past but Trump gets it now – if you don’t believe it, look at his Christmas card.

John Adams was right – the Constitution can only thrive among a moralistic and religious people. If America is to be brought down it will occur from the inside-out. Our political leaders would do well to take Adams’ words to heart and act accordingly before it’s too late.