— Reprinted with Permission of The New American.com —

One of the report’s recommendations, which the Obama-friendly media fixated on, concerns greater restrictions on transfers of military equipment to local police agencies. However, as we reported in a related article (“What’s Happening to Our Police?“), the new “accountability” rules will not explicitly reduce the flow of war materials to law enforcement, but simply place more federal controls over local police. Moreover, the new Obama rules regarding military gear were just one component of a broader set of recommendations issued by Obama’s plan for “21st Century Policing” — the overarching theme of which was promoting increased federal control over law enforcement.

While speaking to a group of police at a carefully stage-managed event in Camden, New Jersey, the president also touted some of his other efforts to exert more control over police — officers who, in accordance with the Constitution, are supposed to serve and be accountable to local communities and the wishes of local citizens, not the mandates of the White House. Among other schemes, Obama boasted of his administration’s alleged efforts to “fight crime,” improve relations between police departments and the communities they serve, and promote “transparency.” He also touted a White House “data initiative” aimed at prodding police departments into following federal “guidelines” on data and body cameras.

Finally, Obama also celebrated federal “grants” created by the administration to promote and fund the implementation of dubious policies associated with “community policing strategies.” Those federal grants, of course, along with others, are at the heart of Obama’s efforts to nationalize everything from healthcare and education standards to law enforcement. Among the schemes to be promoted with the new grants are national standards for police departments receiving federal funds. Some critics have started describing the plot as “Common Core for police,” a reference to the Obama administration’s Department of Education efforts to bribe states into imposing the deeply controversial national K-12 school standards and the associated federal testing regime. The effort also comes just a few months after United Nations Secretary-General Ban Ki-moon, citing Ferguson, demanded that American police submit to “international standards.”

According to a report by Obama’s task force released in March, two tentacles of the Department of Justice, the Office of Community Oriented Policing Services (COPS) and the Office of Justice Programs, “should provide technical assistance and incentive funding to jurisdictions” that adhere to the White House plan, “in return for receiving federal funds.” The report also called for uniform federal standards for data collected by local police departments, and much more.

Even before citing militarization of police as an excuse to usurp more control over local police, Obama was celebrating the recommendations of his task force, and demanding rapid implementation. “I’m going to be asking Eric Holder and the Justice Department and his successor to go through all of these recommendations so that we can start implementing them,” he explained. “I know one area that’s going to be of great interest is whether we can expand the COPS program that in the past has been very effective, continues to be effective, but is largely underfunded.”

The recommendations offered a “great opportunity” to “really transform how we think about community law enforcement relations,” Obama said. “We need to seize that opportunity,” he continued, echoing the “never let a crisis go to waste” rhetoric of other statists. “This is something that I’m going to stay very focused on in the months to come.” He certainly was not kidding.

Just weeks after the report was released, the administration unveiled a list of six U.S. cities targeted to serve as “pilot sites” to develop and deploy federal guidance for local police — all of it supposedly to create “better procedures, reduce racial bias, and regain citizens’ trust.” The plan, officially dubbed the “National Initiative for Building Community Trust and Justice,” will use U.S. taxpayer dollars to deploy “experts” and “researchers” charged with training officers to act in a manner that the DOJ deems just — in essence doing the bidding of the Obama administration. Officially, the Justice Department will be helping local officials “fight crime” under the scheme, according to news reports.

Initially, the program, which will cost American taxpayers almost $5 million, will aim to “assess” the relationship between local police and the communities they serve. Then, the DOJ squads will work to develop plans supposedly aimed at enhancing “procedural justice,” reducing bias, and supporting “reconciliation in communities where trust has been eroded,” the Justice Department said in a statement announcing the plan. With more than two-thirds of Americans saying in a survey that the federal government is “out of control” and a “threat” to their liberties, it was not immediately clear how “trust” would be “restored” by deepening federal involvement.

The first six cities to be targeted as pilot sites will be Birmingham, Alabama; Fort Worth, Texas; Gary, Indiana; Minneapolis, Minnesota; Pittsburgh, Pennsylvania; and Stockton, California. Fort Worth Mayor Betsy Price described the program as “a tool to strengthen our partnership with the justice system.” But other police departments are also in the cross hairs. According to the official announcement, an unspecified number of “police departments and communities that are not pilot sites” will also be targeted for more DOJ “training” and “technical assistance.”

It bears mentioning that the DOJ,  which supposedly will guide local law enforcement in proper procedures, has in recent years been exposed training state and local police to view citizens’ speech as potential indicators of terrorism — including among damning public expression mundane matters such as bumper stickers promoting the Bill of Rights or a U.S. withdrawal from the UN. Ironically, at the time of the announcements on pilot cities, the DOJ was being led by disgraced Attorney General Eric Holder, who was held in criminal contempt of Congress for trying to stonewall an investigation into the administration’s “Fast and Furious” scheme to arm Mexican drug cartels.

The efforts to further nationalize and federalize law enforcement are also in line with Obama’s campaign rhetoric about building a “civilian national security force that’s just as powerful, just as strong, just as well-funded” as the U.S. military. And critics say the agenda should be ringing alarm bells nationwide.

“Americans everywhere should be very concerned about oversight of local police agencies,” explained former detective Jim Fitzgerald, the national field director for The John Birch Society, the parent organization of this magazine. The constitutionalist group, which has chapters in all 50 states, has been running a campaign for decades called “Support Your Local Police and Keep Them Independent.” The effort is meant to, among other goals, protect local communities from having their police departments turned into tentacles of an all-powerful federal government.

“These steps to exercise and take control over police departments should raise a red flag among police officials and give deep concern to anyone who understands the history of national police forces,” continued Fitzgerald. “Have we so soon forgotten the Gestapo and the KGB, both national police agencies, that terrorized the citizens of Germany and Russia and led to the imprisonment and deaths of tens of thousands of innocent men and women? Has there ever been a national police force that benefited the citizens who live under it? Never!”

Of course, the nationalization of police did not begin with Obama, and it probably will not end with him. So-called fusion centers, pairing local and state officials with federal bureaucrats under the sprawling “Homeland Security” banner, have been in place since the George W. Bush administration. And a broad range of DOJ offices and programs has been quietly expanding federal control over police for decades. But the trends are accelerating, and the endgame is becoming more clear. 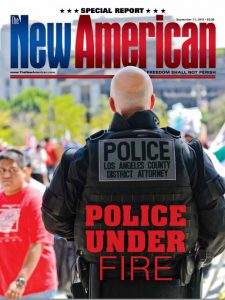 Decentralized government is one of the cornerstones of America’s freedom and its constitutional system of federalism. Even if Obama’s radical plans to nationalize police departments were not unconstitutional, though, history provides numerous examples showing why national policing is not just unwise, but extremely dangerous to liberty. Congress must rein in Obama, and in the meantime, state and local governments should refuse to surrender self-government to an out-of-control White House in exchange for unconstitutional federal bribes. The American people, if they hope to preserve liberty and self-government, should work to support their local police, and keep them independent.

The above article appears in our “Police Under Fire” special report. (Click on the image to download a PDF of the full report.)

Racism Is A Public Health Crisis