This article is for those who are aware of what is happening in our country and world.

If you have taken the red pill and are ready to do something about it peacefully while we still can, please continue reading.

If you have chosen the blue pill and wish to go back to sleep and bury your head in the sand, please keep moving along– there is nothing to see here…

As our founding fathers once said:

“It does not take a majority to prevail… but rather an irate, tireless minority, keen on setting brush fires of freedom in the minds of men.” (Samuel Adams); and “If there be trouble, let it be in my day, that my child may have peace.” (Thomas Paine)

You already know there are a myriad of issues we face on a daily basis from these tyrannical laws which invade every aspect of our lives. From healthcare, education and property rights to our precious constitutional rights!

Executive orders such as 13603 and 10999 are taking control of essential resources which affects us all.

Mind you, this is in addition to the numerous rounds of hollow point bullets and crimes being committed by law enforcement without laws being passed as outlined here.

Benjamin Franklin was quoted as saying we have “a Republic… if you can keep it,” and Bill Cooper once said, “You will have a choice, either you can resist; or you can bend over and shackle your own two feet and walk peacefully into slavery.”

Which do you choose?

Have there not been enough people who paid the ultimate price just to bring you this information, who have fought for the freedoms you have enjoyed up to this point?

I ask you, what do you leave for the next generation? What will your legacy be and what role will you play in the history books?

One day when your children and grandchildren ask you if you did everything you could to stop what we all know is coming, will you be able to truthfully say yes?

“Some even believe we are part of a secret cabal working against the best interests of the United States, characterizing my family and me as ‘internationalists’ and of conspiring with others around the world to build a more integrated global political and economic structure – one world, if you will. If that’s the charge, I stand guilty, and I am proud of it.” – David Rockefeller (Memoirs page 405)

The evidence lies within the depths of the internet for all to study, if you only take the time to do so.

Take a good hard look in the mirror and determine where your rights come from. 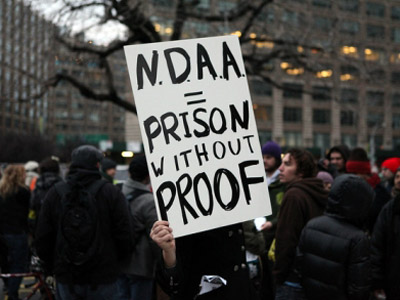 I chose to being by taking action against the National Defense Authorization Act (NDAA), passed in 2012 that states any American citizen can legally be detained without being charged or the right to a fair trial, indefinitely!

It’s a little difficult to convince your friends and family to be vocal and stand in solidarity for their rights when the fear of repercussions like being kidnapped by the military, mocked by your peers and being indefinitely detained are a reality.

If you are standing up for anything against the status quo of the establishment, you can be detained indefinitely without charge or trial.

When the masses truly understand republicans and democrats have condoned this and are equally to blame, they will look at things with new eyes.

Here is what I did to nullify the NDAA in my town.

Take Back Your Town From NDAA 2015

First I studied the NDAA myself. I am a visual learner as well as a common sense learner.  I read articles, watched videos like these: Why We Must Fight Tyranny andKrisAnne Hall’s Legal Breakdown of the NDAA, read about the court case Hedges v Obama, and spent a lot of time and signed up at PANDAUNITE .

Once I was familiar with the subject matter, I began talking to friends and family about it and got comfortable speaking and answering basic questions.

Attend your city council meetings. I went to my city council for the first time and here were only a couple people in the room other than the council members including the mayor, city clerk and the attorney. I’m talking ghost town here, people. I spoke at the public comment and gave a brief introduction (which I had practiced with my friends and family).

You will want to find out by visiting your city website or calling the clerk when the meetings are and if you have open comment in your area or if you have to be on the agenda in order to speak. All cities do it differently, so find out how yours works.

After I spoke, I got email addresses and contact information for all the council members including the mayor. I also made arrangements to ensure this issue would be on the next agenda as an item to be discussed.

After I spoke to the council, I started networking in my local area with current established groups. In my case, it was a local tea party and local businesses.

I made arrangements to meet with them and gave presentations to their members to see if they would be interested in coming out in support the next time I would go and speak about the NDAA. I printed flyers to hand out to people and post at local businesses to spread the information on the next meeting, editable flyers are at:Action Kit.

I reached out to my local paper and educated them on the issue and the action I was taking. Being that this is a non-partisan human rights issue, they were pretty welcoming to letting me write a guest opinion. There are a lot more restrictions and hoops to jump through when you are “left” or “right” which I didn’t have to deal with once they were properly educated and informed about what the NDAA is and what PANDA (People Against The NDAA) is.

I also became an admin for my states PANDA page on Facebook in order to share information locally. There are pages set up for each state just waiting to be used!

Additionally, I called into local and national radio shows to help get the information out.

In order for people to come out to support this or anything, they have to believe in it and understand why it affects them. When you are working on all the steps, remember to always be inclusive, we have strength in numbers.

Remember this is non-partisan, this is a human right.

Stick to human rights and to things we all have in common. This link: Who Is a Terrorist? and DHS and DOJ memos and directives help as well.

Showing how they can fit some or all of the criteria outlined on the government’s own documents is a big eye opener.

If you successfully, thoroughly, and repeatedly complete the first 5 steps, step 6 should take care of itself. Then you will be speaking the same language as your politicians: Re-election.

I think it does something psychologically when you go from one person to 15 to 30 to over 80.  It seems like they will pass whatever you want so your numbers don’t keep multiplying.

Don’t take no for an answer!

Most of the time, you will be offered a “compromise,” which in my experience equates to the city council or county commission drawing up their own resolution that doesn’t do anything.

You want the Restoring Constitutional Governance Resolution (RCG) passed and nothing else.

Your city and county have the authority, the right, and the duty to do this locally; they don’t need their “Big Brother” to do it for them. Speaking their language will force them to pass the RCG.

After the RCG passes and throughout the process, exchange contact information with each person helping and attending in these efforts.

This will be your network not only to watch the watchers but because a piece of paper doesn’t stand on its own. It takes vigilant human beings to ensure it happens.

You will be able to also use the same people involved and same tactics to fight the next issue of the people’s choosing.

Additionally, there also are resolutions for Sheriffs and Police Chiefs to sign too.

After you complete these steps successfully, share your win with news outlets.  You will, at minimum, be giving a statement for a press release which PANDA and other sites/media outlets will release.  Help share this information wherever possible.  The more people hear about it, the more will do it.  If any of your elected representatives voted against their oath and against our inherent rights, it’s at this point that they will be in the spotlight.  The people then will choose whether they want this person to continue to represent them or to recall anyone who voted no.

This is a marathon, not a sprint.  We want to make sure people don’t get burned out with all the issues in society.

This should help make your efforts in the future a lot easier, but don’t forget to take a rest and remember to stay balanced.  This will help to facilitate more people to get involved once they see this victory.

For more information, visit PANDA’s website to get involved. You can start by sharing this article.