I awoke in the night finding myself compelled to check for something on my computer that I am expecting and since I use The New Ameican.com as my homepage instantly saw Selwyn Duke’s, “Death by Education,” which almost demanded reading immediately.

His paragraph that drove me forward to pass this information on reads: “By the November 2020 election, approximately 10 million Americans will have died; mostly older, they’re a demographic that generally votes for conservatives. They will be perhaps more than replaced, though, by approximately 16 million young people who will turn 18 between now and then. Yet these new voters won’t fill their elders’ shoes: They’ll disproportionately cast ballots for hardcore statists, perhaps being the most “liberal” group of 18-year-olds in American history.”

That fact is perhaps the scariest and most foreboding of propositions entailing America’s future. For those of us who were properly educated about the history of our great country, our Declaration of Independence, Constitution, Bill of Rights and the importance of maintaining traditional values, morality and the rule of law it is extremely difficult to fathom how much of education as we’ve known it has been turned upside down. Or in other words, flagrantly right in front of our faces, our precious youth are being groomed as vibrant young socialists by our government’s establishment. The modus operandi has been schmoozing us and we’ve been denying reality right in front of our faces.

Thomas Sowell in his Inside American Education – The Decline, The Deception, the Dogmas, “The responses of the educational establishment to the academic deficiencies of their students today include (1) secrecy, (2) camouflage, (3) denial, (4) shifting the blame elsewhere, and (5) demanding more money.

“‘Confidentiality’ policies maintain secrecy, while inflated grades and a policy of not recording failing grades help many institutions to camouflage the facts, so that optimistic public statements can effectively deny what is happening. When the facts become so blatant as to overwhelm these defenses, the strategy is simply to shift the blame to some other factor- outside the educational system. These include both social factors and financial resources.”

I can’t express the need for our awakening to this inevitable conclusion acknowledged by Mr. Duke’s above statement strongly enough. The plan is in, it is working, we are dying off, they are the future in even greater numbers and they are most certainly not what we have been. Therefore, America is destined to go by the way. Unless, we get madder than hell, and make a commitment to do something about it all. 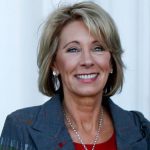 We must support our exciting new Secretary of Education Betsy DeVos. She is more than a breath of fresh air being injected into the dark foreboding world of what has become a socialist’s preparatory process. She promises to be a transformative disciple of traditional American values, factual history and cognitive training which our children are being deprived of today in public schools.

Selwyn Duke also reported that in Betsy DeVos’s 2013 interview with Philanthropy, she expressed support for vouchers, private schools, charter schools, homeschooling, and “digital learning” as viable options under educational choice, but did not name public schools. DeVos wrote in an op-ed for the Detroit News in 2016 that the Detroit public schools system should be replaced entirely with a free-market system. ([Husband] Dick DeVos, who served on the State Board of Education in Michigan in 1990, said in 2002 that public schools should be called “government schools.”)

“All the ingredients for a successful educational system already exist in the United States – some of the leading scholars in the world in numerous fields, masses of college-educated people capable of teaching in the public schools, and a public whose willingness to provide financial support for education has far outstripped educators’ willingness to buckle down to the task of teaching academic skills to the next generation. The problems are fundamentally institutional. Changing those institutions is the key to changing behavior and attitudes too long insulated from accountability.

“The political task is enormous, but no more so than the task of others before who have made vast changes in the social landscape of the United States, or who created this country in the first place. The stakes today are our children’s future – and nothing should be more worthy of the effort.” – Unquote Thomas Sowell