As a former prosecutor of the U.S. Department of Justice (DOJ), founder of Judicial Watch and now Freedom Watch, and its current general counsel and chairman, I filed a complaint Monday before the Office of Professional Responsibility and Inspector General of the DOJ, demanding an investigation and the eventual removal and prosecution of Special Counsel Robert Mueller for his and his conflicted staff – which are Democrat/Clinton political campaign donors and supporters in large part – having illegally leaked grand jury information to harm President Trump, his family and former and present colleagues.

The Justice Department’s Office of Professional Responsibility (OPR) and Inspector General (IG) are charged with investigating and remedying unethical and illegal behavior by the special counsel, his office and other DOJ lawyers and staff. Special Counsel Mueller derives his authority and powers from the DOJ, as he was appointed by Deputy Attorney General (DAG) Rod Rosenstein – not coincidentally a closet Democrat and President Barack Obama’s former U.S. attorney for the District of Maryland. Attorney General Jeff Sessions must have been smoking his “hated” marijuana, or been high or drunk on something else, when he chose Rosenstein as his No. 2. A worse and more stupid choice could not have been made!

As Sessions and Rosenstein have failed and apparently refuse to properly police the illegal grand jury leaks and conflicts of interest of Mueller – putting their own personal, political and professional interests before all else – the job therefore fell upon Freedom Watch to file this complaint before OPR and the IG, to represent the interests of the American people for honest and non-biased government and to address the sham investigation Mueller has been vindictively pursuing for his friend, a fellow former FBI director himself, James Comey. 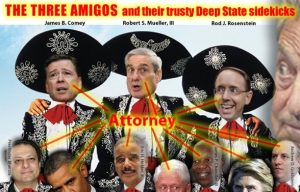 The regrettable backstory here is that these two DOJ public servants – Sessions also being a former U.S. senator from Alabama – are themselves under investigation by Mueller for their alleged involvement in alleged collusion with Russia in the case of the AG and the firing of former FBI Director James Comey in the case of the DAG. For this and other reasons, which sadly are the norm in our compromised Justice Department, which continues to be loyal to the former administration, not the Trump administration, these two “chameleons” have figuratively desecrated the once proud blue and yellow emblem and shield of DOJ – which I used to have hanging proudly in my office – to save their law-enforcement skin, which has simply turned yellow!

If OPR and the IG themselves fail to take action, you can rest assured that Freedom Watch will file a court complaint to try to force them to take appropriate and immediate action, as well as use other lawful measures, such as petitioning Chief Judge Beryl Howell in the D.C. federal court overseeing Mueller’s grand jury investigation to address these issues through an evidentiary hearing. Importantly, neither watchdog of DOJ conveniently feels any obligation to disclose the scope and nature of their investigation.

Also importantly, the timid lawyers representing the president and other targets or subjects of Mueller’s “kangaroo court” criminal investigation have been loathe if not afraid to take him on. Both President Trump and the special counsel’s other targets and subjects need new lawyers, outside of Washington, D.C., who are not part of the legal swamp there – where all political persuasions scratch each other’s back as part of the “club” that continues to feed itself through case referrals, fee splitting and other perks and benefits for the “legally privileged” mega-firm lawyers that reside on the banks of the Potomac. In short, it’s time to take the proverbial gloves off.

As Popeye used to say, “Enough is enough and enough is too much!” It may be impressive to be able to take a punch, but in my long career it is much better and more effective to give one – in this case, a very big punch, figuratively speaking, to legally flatten Mueller’s already bloated visage. 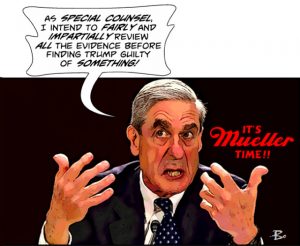 To sit back and watch Mueller’s and his staff’s legal jihad unfold with impunity is a huge mistake, and that is why you, the American people, should also intervene and write and email these offices and demand action. In particular, you should also express your extreme displeasure to Sessions and Rosenstein for their failure to police Special Counsel Mueller and the politically compromised Trump-loathing 16 and counting generally leftist prosecuting attorneys he hired at great taxpayer expense to do an unethical and illegal hit on and ultimately destroy our president.

Finally, the latest outrage to come out of Mueller’s grand jury investigations was disclosed this week when it was revealed – by leftist CNN, no less – that the special counsel had previously done legal work for a Gen. Michael Flynn company, Ironbridge. See “Mueller Briefly Did Work for Flynn-Tied Firm,” CNN.com (Sept. 14, 2017). Mueller and his equally conflicted staff have been tirelessly working to “burn” Flynn and, now we learn, his son as well at the legal stake.

If Ironbridge is one of the companies associated with Flynn or his son under investigation, this conflict of interest could result in Mueller’s ultimate disbarment and other severe penalties, if he had not recused himself from at least this aspect of the ongoing grand jury probe. All of this needs to be investigated by OPR, the IG and Chief Judge Beryl Howell, who also needs to hold a mini-trial and put Mueller and his henchmen on the stand to explain and account for their actions.

The OPR and IG complaint I filed on behalf of Freedom Watch, the “People’s Justice Department,” speaks for itself. I urge you to carefully review this complaint to understand the egregious, unethical and illegal actions of this politically partisan special counsel. Mueller must be removed, along with his conflicted and compromised staff, and then referred to the U.S. attorney for the District of Columbia for prosecution, as they all have violated their oath of office and the sacrosanct Rules of Criminal Procedure, as well as several provisions of professional codes of conduct for lawyers. Go to www.freedomwatchusa.org to read this complaint and join our cause.