Betsy Russel, leftist reporter for the Spokesman Review, was asked by her handlers to write a hit piece on Representative Heather Scott R. Dist. 1 concerning a certain Confederate flag that was displayed on Representative Scott’s float for the Timber Days Celebration July 25th. (Story link) Rep. Scott posted the picture of her and the flag on her Facebook along with a message: “Protecting and promoting our freedom of speech is an honor.” Ms. Russell suggests that the picture has touched a nerve in our state as it is associated with racism and Richard Butler’s Aryan Nations. 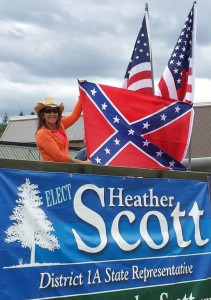 This is the photo Idaho Rep. Heather Scott posted on Facebook, writing, “Protecting and promoting our freedom of speech is an honor.”

Why is it that the liberal media and their mud raking reporters can claim these outrageous suggestions about truly patriotic legislators who are fighting for the rights of Idaho’s citizens and never criticize those legislators who abrogate our constitutional rights? Liberals are always trying to take the high ground when it comes to playing the race card, a tool of the intellectually weak and lazy when they cannot counter a logical argument with factual data. Rep. Scott’s comment on her post explained why she flew the confederate flag, and there was no way to misconstrue her meaning or intention, yet Ms. Russell plays the race card just like every other media maggot that has trouble reading and understanding our constitution.

Ms. Russell goes on in her article to quote Tony Stewart, a founding member of the Kootenai County Task Force on Human Relations, who called the Confederate flag a symbol of segregation and discrimination. He further stated how unfortunate that any political leader would send a message to their constituents that would be so highly offensive. I just wonder what he would call the Gay Rights Rainbow Flag. Maybe a symbol of victory over Christianity? To the LGBT community the Rainbow flag is a symbol of unity and victory especially for gay marriage, but you never hear any complaints by the liberal media about where the Rainbow Flag is flown. Evidently Tony nor the author of this article remember the executive order that President Obama signed ordering the Rainbow flag to be flown at the White House and on Federal buildings this past July 4th. I didn’t see or hear Ms. Russell or Mr. Stewart complain publicly or write anything about how the display of this flag would be offensive to many Christians. 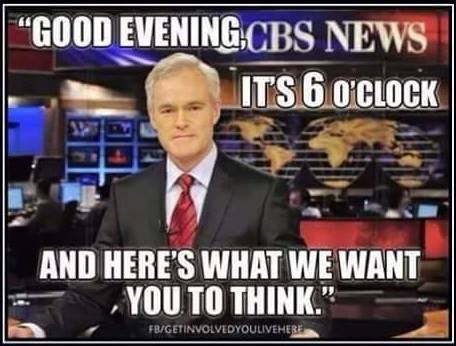 We at the Gem State Patriot believe that Representative Scott’s actions in the display of the Confederate flag for the reasons she stated—”Protecting and promoting our freedom of speech is an honor”—were fair and justified. Ms. Russell stated in her article that the Facebook post drew only a handful of comments, all supportive with one supporter saying Thanks for standing up for why we voted you.  All I can say to Ms. Russell is, get a life and start writing articles that would show that she actually does have some literary talent and a nose for a good story instead of writing hit pieces for her employer about legislators who stand up for our constitutional rights.

Here is a response to the Spokesman’s article by Representative Scott:

“The media and establishment are starting early for the May election. My voting record for freedoms is top in the state. (#1 of 105 legislators for voting for citizens’ freedoms and liberties.) They have to find a way to discredit me. The timber day parade, which happened over a month ago, is just another example of my stance for citizen’s freedom of speech. While Washington career politicians, Obama loving liberals, and the Boise establishment may believe in ‘political correctness and rewriting history’ I do not, and I believe the majority of Americans and Idahoans believe the same.”