The federal government created a beast, landscape conservation cooperatives (LLC) for wildlife protection, sprouting in 2011 following the “America Great Outdoors” initiative in 2010.No congressional approval came with this, the Department of Interior (DOI) just created it and assigned the U.S. Fish & Wildlife Service (

No congressional approval came with this, the Department of Interior (DOI) just created it and assigned the U.S. Fish & Wildlife Service (FWS) to implement it. The FWS claims it is “…self-directed partnerships between federal agencies, states, tribes, non-governmental organizations, universities, and other entities…”. Yeah, right.

In the article, Kiss Idaho Goodbye, the discussion centered around only the Great Northern Landscape Conservation Cooperative (GNLCC). But that is only part of the story. Here is the rest of the map.

The rest of Idaho will be taken by the Great Basin LCC (GBLCC). Here is the GBLCC Strategic Plan for your southern Idaho area. 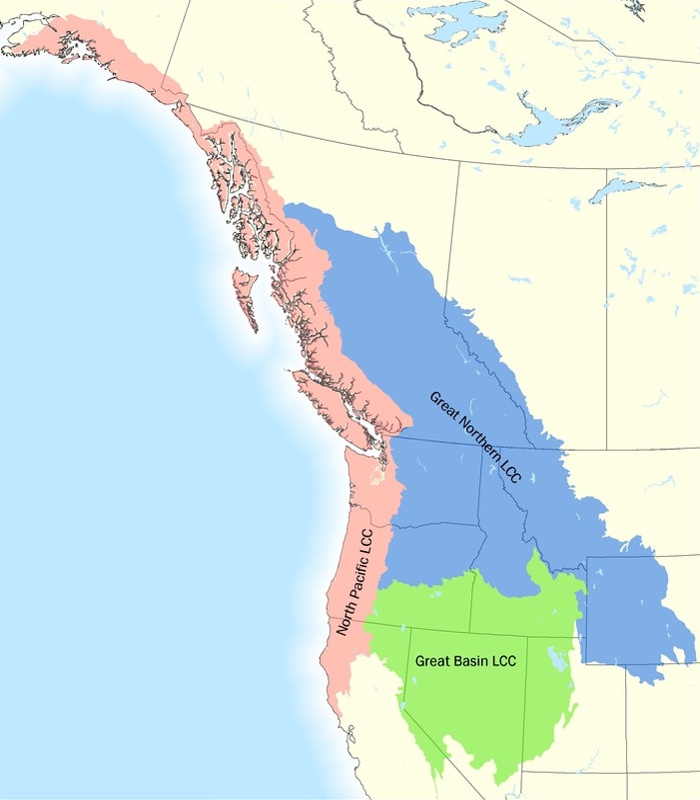 Like all of the other 21 LLCs in the United States, GBLCC networks with other LLCs through the Landscape Conservation Cooperative Network (LCCN). This network is pretty boastful about crossing all boundaries in its work, across state and county lines, and with other countries, in fact sucking up every piece of dirt in the United States. One of their goals is habitat connectivity which includes helping what they think are ignorant animals figure out how to migrate without getting hit by a vehicle, thus requiring their own personal passage. Of course, the LCCN includes the United Nations (UN) International Union for Conservation of Nature (IUCN) as a close partner. What the IUCN promotes, the network delivers to all of their little conspirators.

Another group, the Network for Landscape Conservation, works with the IUCN and National Park Service (NPS), but looks suspiciously like an NPS program similar to FWS.

One section not discussed in the first article was the Salmon Selway which is part of the Trust for Public Land (TPL). TPL partners with corporations, such as the World Business Council for Sustainable Development (WBCSD), a UN organization, and Disney, a UN partner. One of its jobs is to protect public lands from going into your hands, let alone allowing you to use them in your area. The other activity they engage in is purchasing land for conservation easements which ultimately tightens the connectivity and puts more land into government hands. Here is an example of their other dirty work in Georgia, buying private property and putting it into the hands of the National Park Service. Incidentally, TPL was founded by a former director of the Nature Conservancy.

Being part of the TPL, the Salmon Selway has been used to “…conserve the most critical private lands…”, that is, putting that land into government hands. The map in the link will show you the areas they have stolen from Idahoans.

So the federal government created a system where they could hide themselves behind their partnership with UN affiliated buddies to do their dirty work up front, and create scams to steal more land from Idahoans. What exactly are they doing?

Well, we have to keep going back to the IUCN as the federal government partners with them along with these other treasonous little groups, whether directly or indirectly.

As an IUCN partner the FWS supports funding and implementing ICUN programs, many of which are conservation programs such as conservation connectivity. In this IUCN document, they call these Areas of Conservation Connectivity (ACC), which “…interconnect protected areas and in doing so, they help integrate these areas into wider…landscapes…” (pg 25), which is exactly what the LCCs are doing. Thank goodness it will allow movement of individuals, actual humans, among habitat patches within home ranges (pg 31). The primary objective is to “…conserve and actively manage migratory route connectivity and the underpinning natural habitats…”(pg 32). The LCCs implemented by FWS initiatives are playing “…an increasingly important role in biodiversity conservation and in helping to achieve Target 11 of the CBD Strategy 2011-2020 (pg 40), another UN agenda. The IUCN also believes these areas should be “transboundary” (pg 27), and have had their eyeballs on West Yellowstone with their global conservation movement. Sorry IUCN, Yellowstone does not belong to you. You may have the arrogance to call it a Heritage site, but it is an American site, and as such, belongs to Americans.

In spite of the IUCN claim that there should be “community involvement”, the truth is this agenda is primarily driven by the federal government with its UN affiliated groups and foundations. Small communities like Island Park are being terrorized by all of them, the very people who live there, have roots there, and who care most about and understand the area.

But with the new Agenda 2030 Goal 15, much progress is being made to take land away from us, put it into the hands of the UN and federal government, and continue the march towards the dismantling of America.

And these groups call themselves Americans. Being an American while engaging in these activities is a dichotomy for which each of them should search their souls and beg for absolution.

As seen from the full picture, Kiss Idaho Goodbye.

Idaho Republicans Have No Confidence in Simpson