Kevin Miller is setting an example to anyone who has a weight problem or, as many might say, an addiction to food. I’m not sure if I was an inspiration to Kevin in this quest but maybe I played a small part in his decision to get back to his body building weight.

We all know that our dear friend and conservative talk show host is always out in the fore front when it comes to helping people and even with his quest to live a healthier life he accepted an invitation to come on my new show Healthy Conclusions. Please tune in on Sunday, August 6th between 5 and 6 pm on 580KIDOam and 107.5fm to hear him speak about his lifestyle change.

Most of you don’t know that Kevin used to be a body builder in his teens and you would not believe it is the same person if you saw a picture of him then and now. Kevin is not afraid to admit that it is totally his fault that he gained all of the weight he now carries and as many of us know it is so easy to put it on but so difficult to take it off. Most of us know that we eat a lot of things that are not good for us, but then we figure what will a doughnut here and a coke there hurt until we try to put on our clothes and all of a sudden they don’t fit anymore. 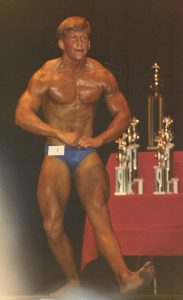 Kevin has admitted that he was in a size 4 extra-large before starting this change and that he actually had to pay more for his clothes because of the extra size and presumably because of the extra material used. His weight was also affecting his health as he was diagnosed as pre-diabetic and might soon have to go onto medication. I believe that this was the straw that broke the camels back and brought Kevin to the realization that he must change his lifestyle or suffer some dire consequences medically.

Three months ago Kevin began his quest to get back to his body builder weight which was less than 200 pounds. That meant that he had to shed over 150 pounds. Now that’s a real challenge in my book. He realized that to continue on the path he was on would cause him and his family no end of grief because of the health problems obesity causes. At 49 years of age, Kevin should have many more good radio years ahead of him if he can change his life style get off his medications to become healthy again.

Kevin was never ashamed of his weight, quite the contrary, I’m sure you have all heard him joke about how he is shaped like a bell pepper. Most of us don’t understand that obesity is a serious problem in our country as 36% of men and women are considered obese. Obesity leads to all kinds of diseases like cardiovascular, diabetes, some cancers, Osteoarthritis and even breathing problems like sleep apnea. Kevin and I often talk about the cost of healthcare but does anyone think about why we have so many sick people? Could it be all about what we are eating on a day to day basis or the fact that we have all become couch potatoes? I think that Kevin will tell you that changing your eating and exercise habits can do great things for you both mentally and physically. The difficult part was making that change from chips and dip to chicken and veggies.

Recently ABC came out with a segment that Doctors should not be telling people they are overweight as it can be harmful to their health and they call it fat shaming. Well, I would say that if doctors don’t tell patients that they need to lose weight or suffer the medical consequences they are not doing their job and should change professions. The media is saying doctors need to ask patients if they can discuss their weight with them before telling them they need to lose some. I guess they believe that doctors should go through some sort of obese sensitivity training also. If your doctor doesn’t tell you that you must lose weight who will?

We need to applaud people like Kevin Miller who recognized a problem and is on his way to fixing it. He is setting a great example for anyone who has a weight problem showing us that anyone can conquer this problem but it entails hard work and a change of lifestyle. Currently, Kevin goes to the gym six times a week he does an hour of cardio and then one hour of weight training. He has also changed his diet substantially to a high protein low carb whole plant food diet. You will now find him at the salad bar and not the bread counter and when he goes shopping he spends most of his time in the fresh produce section. Just using these two tools he has lost over 30 pounds in the past three month’s which may not seem like much when you’re over 300 lbs. but that is actually a great achievement for anyone.

It only goes to show us that it doesn’t matter how big you are or who you are losing weight is a matter of mind set and a willingness to work hard to change to a healthier lifestyle. I myself found that out when my wife was ill and I became the caregiver which was a 24/7 job. I was 225 and not very fit so if I didn’t change my lifestyle I would not be able to care for the person I loved and that was not an option. We all have our reasons to lose weight and get healthy but the only good reason is to do it for ourselves and our families as it is difficult to take care of the ones we love if we get sick.

Kevin Miller has done so much good in our community that sharing his experience with us on his quest to a healthy lifestyle is just one more reason to love this guy. He may dress up as a turkey on Thanksgiving but to the Treasure Valley community, he is a knight in shining armor who is willing to put himself out there for all to see while teaching us all the lesson that giving back is so much better than receiving.

Thank you, Mr. Kevin Miller, for sharing your experience with your lifestyle change. We will be following your progress in your journey and cheering you on to victory. We should all take a minute to remember this: Acts 20:35 In everything I did, I showed you that by this kind of hard work we must help the weak, remembering the words the Lord Jesus himself said: ‘It is more blessed to give than to receive.’ ” (NIV) Amen.