It was only two short years ago that Governor Otter and our crony legislators paid back their campaign contributors by voting for a State Health Care Exchange. Let us remind you of the Board Members of IACI who benefited from the state exchange.

Because of their influence in our legislature we now have seen our health insurance premiums rise by double what we were paying before the exchange came into existence. Our deductibles have gone through the roof, and many people find that they can’t afford health insurance. These IACI corporation members can well afford to play up to be members of the Board because YOU are footing the bill through your higher cost for insurance and healthcare costs. Do you realize that we have a special law that exempts executives of a non-profit company like Blue Cross from disclosing how much they are paid? This is just the medical side of the corporate equation that has been raping Idaho citizens by paying to elect Professional Politicians whose allegiance is to those who help them get reelected and not to the people taxpayers of Idaho. 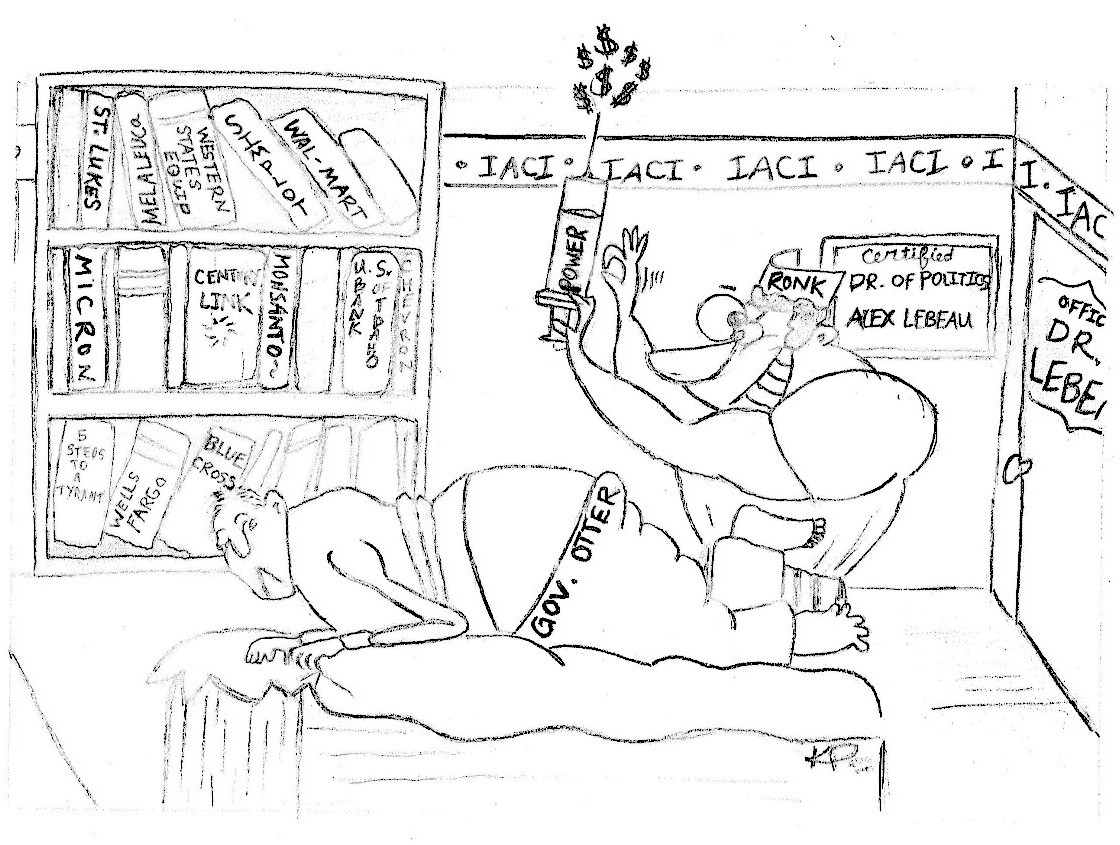 Make no mistake, it is the big corporations that are continuing to push for Medicaid expansion in Idaho because of the number of employees that could be affected. We want to remind you that Medicaid expansion will benefit those companies that can remove many of its employees from their health insurance rolls if they would be eligible for Medicaid. IACI has been secretly leading this charge to pass off the health insurance costs of their members lower paid employees on the taxpayers. The other beneficiaries of Medicaid expansion will be the medical establishment, and we already know that they have been contributing to the campaigns of legislators who have consistently voted in favor of all types of healthcare expansion including the State Healthcare exchange.

It is the job of the legislature to ferret out those who are truly in need of Medicaid and keep out those who are just sucking off of the government teat. The program is supposed to be a social healthcare safety net for families and individuals with low income and limited resources. I grew up in a family that did not have enough money to pay for dental, eye or medical care and we did not have Medicaid in those days. Instead there were charitable organizations which would take care of our needs. We need to look to more charitable clinics to rise up with state sponsorship and help these people who are unable to obtain quality healthcare.

In 2005 the entire state budget was $2.08 billion. In 2015 our legislators approved $492 million in state general fund dollars for Medicaid whose overall budget is $2.03 billion, just .05 billion less than the entire 2005 budget. In 2004 Medicaid served only 162,000 Idahoans, and this year the program has escalated to 246,000 an increase of 80,000 and they want to ad on another 78,000 which will wind up being more like 140,000 when all is said and done.  That would mean covering over 23% or about 386,000 of Idaho’s population. Does anyone understand this doesn’t work if the feds decide not to pay? The Governor and the Legislature have been kowtowing to the corporations of this state long enough and need to find alternate solutions to Medicaid expansion that do not put more pressure on our budget constraints.

People keep forgetting that the Federal Government is borrowing the money they pay us for Medicaid. What happens when they can no longer borrow, or they decide to lower how much they reimburse the state? You and I get to pay the difference, and if we can’t then will have to drop some people from the rolls of Medicaid.

Idaho currently has 21.1% of our population relied on some sort of government assistance each month in 2015. This comes back to the fact that our lawmakers will not recognize that we as a state are uncompetitive from a tax and over regulation stand point for companies with good paying jobs to settle in Idaho. Fact is that the median income for Idahoans has dropped by almost $3,000 since 2008 when Butch Otter took office. We have a part time legislature that doesn’t have a clue about how to fix this problem when the reality is they don’t want to face the fact they are the cause of the problem. We have taxes that are too high and too many regulations to afford the necessary opportunities for new companies to choose our state as a good place to do business. In fact most of the new businesses that have moved here have done so because of tax incentives from the state government which you and I pay for. We don’t need more tax money to provide social welfare, we need better paying jobs for our citizens. How about getting the 62% of our land back that is controlled by the Feds and using those natural resources as a source of employing our people in Mining and Timber jobs like we had back in the 80’s and 90’s when those jobs paid $60 and $70 thousand a year. Fact is as of Jan, 2014 Idaho had the worst wages in the nation and actually ranked 50th for average wage per-capita income and for wage increases since 2007.

I’m not some heartless person who doesn’t care about people as I was once in my life in their exact position. I do care about fiscal responsibility, and we don’t have that in our state. Just last year our law makers and bureaucrats were responsible for costing the taxpayers over $100 million dollars in scandals. The Correction Corp of America, the Idaho Education Network and the $60.5 million wasted on a program called School Net (Compliments of Tom Luna) which only one district in our entire system made use of. These are just some of the reasons we can’t afford to take care of our indigent and low income families. It is because of irresponsible leaders in government and crony politicians who only want to help their buddies suck up our taxpayer dollars that we can’t afford to take care of our citizens.