“Greater love hath no man than this, that a man lay down his life for his friends.” Christ spoke these words 2,000 years ago. Here today we remember the men and women who loved their friends. Who loved their families. Their hometowns. Their country. And their God. 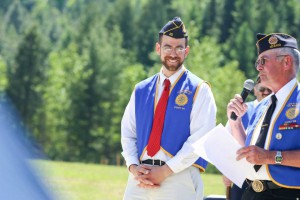 They were not perfect men. They did not win every battle in the field or in the soul. Some of them came from broken homes. Some of them broke their homes.

But the question is not what your scores were when you were in school, or what your temper was like when you had everything easy. The question is, when the odds are stacked against you, when you’ve already tried your best and gotten knocked down, will you give up or will you rise to the occasion?

The late Navy SEAL Chris Kyle developed a legendary reputation amongst Marines and insurgents alike during his four deployments to Iraq. He became the most successful sniper in our country’s history. But the years of warfare took a toll. He had a hard time coping. His wife felt he had abandoned her and their children. He had spent years in the sandbox protecting his brothers. Now, back home, he had to put his trust in God and work to protect his marriage. He did. As a result, the last year Chris and his wife spent together, before his tragic death, was the happiest year of their lives.

Chris Kyle was not a perfect man. But like many others we honor today, he did not give up. He did not give up on the people that were most important to him. Whether in the field or in the heart, he learned from his failures and determined to conquer them rather than quit because of them.

We honor people like Chris because when a man does his duty to his country, defends the freedom of his family, and protects the people around him — Christ calls that love. What we remember today are the men and women who went before us, who may not have lived perfectly, but who loved us perfectly in the end.

Total commitment to one another — loyalty to the man on your left and on your right — drove our honored dead to do things that seemed impossible.

In December of 1776, when the Continental Army was fighting for our independence against the best military in the world, outgunned, outmanned, losing battle after battle, standing on the precipice of defeat, all their circumstances conspired to convince them to quit. But under General George Washington’s leadership, they counterattacked. On Christmas Eve, in the dead of night, thousands of men and their supplies had to cross the icy Delaware River, while making barely a sound, just for them to have a chance of success. Then they had to march for miles, some of them without shoes, staining the snow red with their blood. That attack succeeded, and it kept our fathers in the fight until the final victory, and our independence, was won.

In December of 1950, when innumerable Chinese Communists surrounded American forces at Chosin Reservoir in Korea, our uncles and grandpas could have surrendered to the odds, seen the inevitable logic, and given up. The weather was so cold, the troops so ill-supplied, that the Siberian winds froze their hands stiff. But “the Frozen Chosin” chose to do whatever they had to do — even driving nails into their blackened, frostbitten, fingers — so they could still pull the trigger and fight while withdrawing our wounded and our supplies. In one of the greatest tactical retreats in American history, Col. Chesty Puller and the First Marines acted like an immovable rock that wave after wave, division after division, of the Chinese army dashed themselves against, to their destruction. To paraphrase Chesty Puller, those Americans weren’t retreating. They were attacking in a different direction.

Through a total commitment to God and one another, the impossible has become possible throughout American history.

We stand as heirs of that history. Each of us see today impossible situations, in our lives and in our country. We see what look like unbeatable enemies. We know we’re not invincible. We have sometimes faltered and failed.

When Christ comes, when “the Lord himself will descend from heaven with a shout, with the voice of the archangel, and with the trump of God: and the dead in Christ shall rise first” — when these saints go marching in, they shall lead us on the march home.

Then “we which are alive and remain shall be caught up together with them in the clouds, to meet the Lord in the air: and so shall we ever be with the Lord.”

We await that day. For now we remember them by caring for their graves. By retelling their stories. By cherishing the items and events that made up their lives. They are precious, they are our heritage, and irreplaceable. But God has deposited their greatest treasures somewhere else.

It is in us that they have left their greatest legacy. It is in the posterity for whom they secured the blessings of liberty. For whom they gave the last full measure of devotion.

Let us, on Memorial Day and every day, remember what they lived for in their dying. That we the people, and all that we are, might live. That we might be the living testaments of their strength and their genius, of their beauty and their honor.

How can we better honor their memory than by forging a future they could gladly call their own? A town, a county, and state, in which they would be proud to see their grandchildren and great-grandchildren? A nation, a society, a culture, that proudly bears their imprint even as it tackles the challenges of the next hundred years?

Our future does not have to be a disaster any more than theirs had to be. They would have us do greater things than these, that earned them this hallowed place. They would have us live lives that are worthy of our names, and to pass on a country that we made better, just like they and our forefathers did before us.

To those who say that America’s best days are behind her, to those who proclaim the doom of our people and our civilization, to those who doubt that we can rise to the occasion, they say with one voice, “This is the stem of our victorious stock; fear the native mightiness and fate of them.”

We who are alive here today owe so much to them. And yet I thank God that they were imperfect like us. Because even in that imperfection they gave us much more than we deserved. And one day, may our posterity say the same about us.