Benewah County Sheriff Dave Resser proudly co-sponsored with the Republican Liberty Caucus of Idaho’s (RLC) local chapter a constitutional seminar conducted by nationally renowned KrisAnne Hall on June 12 thru 14th. Sheriff Resser paid $150 of his own money for the rental of the Eagles hall and Hari Heath, Chairman of the RLC and his committee took care of the rest from promoting the event all the way to even cooking for it. The very successful event held 9-5 Fri & Sat and from 1-5 on Sunday was smartly done with it only costing a $10 donation which included lunch on the full days. So well received was the event that other than KrisAnne’s voice you could have heard a pin drop. 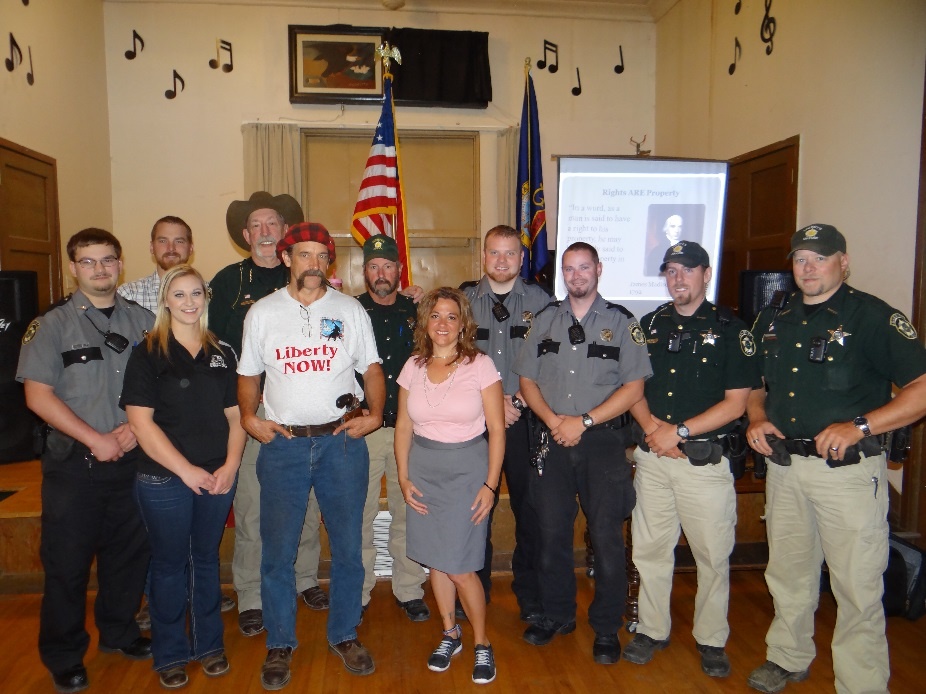 KrisAnne Hall has done an average of 265 of these such classes a year in 20 states for the last 5 years and has become very popular here in Idaho from several appearances around the state. She does not charge appearance fees or require payment for transportation or accommodations. She supports herself solely by the sale of her books, DVD’s and donations. She sold out of everything by early Saturday afternoon. People appreciate her clarity in teaching Constitutional history and the sincere patriotism she exemplifies. The meeting was synergistic and traditional American values thrived throughout the three days. She really packed them in on Sunday afternoon speaking about solutions to our problems with state sovereignty and over-reaching federal government.

KrisAnne Hall is an attorney and former prosecutor who travels the country teaching the Constitution. As a disabled Army veteran, a Russian linguist, a mother, a pastor’s wife and a patriot KrisAnne brings insights that no other can when discussing our Sovereign Duty.

Attendance for the three day seminar in this remote mountain community was 245 concerned citizens. Those Idahoans all left with a much clearer understanding about the genealogy of our constitution and what our Constitution really says and what that means. They also learned that we must get involved learning issues, informing others and making a difference at the voting booths to rid ourselves of our disingenuous unconstitutional legislators and presidents who must be replaced with patriots that understand and follow the Constitution.

America needs awakening today like never before. KrisAnne Hall can jerk their chain and show them the light. I suggest your organization do what Hari Heath’s impressive RLC organization did with or without your Sheriff’s help and get KrisAnne in front of Idahoans who want to get America back to what brought us following Constitutional law.

Check out her website at KrisAnneHall.com for articles, audio podcasts and videos. You also might donate to this most deserving, inspirational American who is a precious jewel among patriots.