With this ninth circuit court decision we once again find our courts attempting to circumvent the meaning of our constitution. Let me repeat once again the infamous words of Thomas Jefferson, when he warned “The federal bench could easily become a despotism of an oligarchy” and we are seeing that happen right before our very eyes. 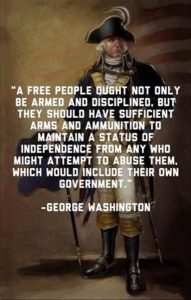 This ruling reeks of judicial activism which occurs when judges decline to apply the Constitution or laws according to their original public meaning or ignore binding precedent and instead decide cases based on personal preference. Many judges refuse to interpret the Constitution and statutes according to their original public meaning or perhaps lack the understanding of how to do so. Instead, they seek to impose their personal preferences.

I would submit that allowing this ruling to stand is tantamount to putting all Americans lives in danger when we have a serious national security problem with the war on terror, and the threat of terrorism by foreign combatants like ISIS. We have a court system that allows convicted illegal aliens, criminals and drug gangs to run rampant in our cities with total disregard to firearms rules and regulations. They commit crimes in broad daylight with no one to stop them. Police cannot be everywhere and they cannot respond fast enough in many cases to save lives. One only has to point to the 60 shootings over Memorial Day in the City of Chicago to show cause why one should be permitted to carry a concealed weapon just to walk the streets.

In the words of Ronald Reagan: “The role assigned to judges in our system was to interpret the Constitution and lesser laws, not to make them. It was to protect the integrity of the Constitution, not to add to it or subtract from it—certainly not to rewrite it. For as the framers knew, unless judges are bound by the text of the Constitution, we will, in fact, no longer have a government of laws, but of men and women who are judges. And if that happens, the words of the documents that we think govern us will be just masks for the personal and capricious rule of a small elite.”

Anyone concerned with their second amendment rights had better think twice about not voting in the presidential election in November because if Hillary gets elected not only will our gun rights be in jeopardy but all of our rights under the Constitution.

The preceding were Tea Party Bob’s comments on this morning’s Kevin Miller show on 580 KIDO.