In the book A Racial Program for the 20th Century written in 1912 by Israel Cohen, a founding member of the socialist Fabian Society, it reveals the Communist “Grand Strategy” to subvert and destroy America using the race weapon. Supporters of the Black Lives Matter premise are what Lenin called “useful idiots.” They have been duped and are being used to make the revolution appear righteous. They do not know they are being used and working for their own demise. The fervor of their bogus grievance is creating a vacuum. What will fill the vacuum? An entirely new breed of police will fill the vacuum. Carefully selected and under federal command and control the new police will be malleable and loyal only to The State. Ultimately, they will be ordered to crush Black Lives Matter, but only after rebellion from the corners of tradition are crushed first.

“The individual is handicapped by coming face to face with a conspiracy so monstrous he cannot believe it exists. The American mind simply has not come to a realization of the evil which has been introduced into our midst.” J. Edgar Hoover (Director of the BOI and FBI 1924 thru 1972)

What you are witnessing in the frequent assassinations of police officers is the beginning of the final push to a police state. From here we go downhill fast ─ riding the Big Lie full throttle.

The soil was prepared for this moment for over 50 years. That’s right, the chaos and violence unfolding in front of you was carefully planned and cultivated in our minds over two generations. Now, like a conductor Obama presides over the symphony of chaos with a smug expression. For eight years Obama’s divisive, incendiary rhetoric has been building to a crescendo. Dead cops please our dear leader. Dead white cops please him more.

Washed in black liberation theology, Marxism and Islam, Barry sees the world through an anti-American paradigm and has a score to settle with America and Western Civilization. He was choreographed for this moment in history.

Barrack Hussein Obama was able to light the fuse only because the minds of the soon-to-be new majority have been prepared as tinder through Soviet techniques of mass psychology for over two generations. Conversely, over the same period of time and through similar methods the majority was made passive to their dispossession and to feel guilt, self-loathing, indifference or even contempt toward our heritage and founding ethos. The minds of the out-going majority are intimidated and glued up with misinformation. They are rendered incapable of rallying the nationalism needed as the antidote because a hole was blown in America’s identity.

Healthy minds would see through the deception. Healthy minds would see Barack Hussein Obama for what he is and discredit him in the court of public opinion as an empty suit, a laughable stooge of the tried-and-failed Marxist ideology who utters absurd assertions. If not for the spell we are under Marxists would not have been able to build the revolution Obama now commands with his dog whistle speeches.

Who hears the whistle? Those taught militant ethnocentrism, envy, black liberation theology, social justice, racial solidarity, grievance, victimization and white guilt. The most radicalized among them pull the trigger on Cops. Why?

Every successful revolution targets police. Police need to be brought to heel, discredited and replaced by a new internal guard. Followers of Black Lives Matter are taught to believe police are a proxy Klan for a racist white majority. These thugs, rioters and cop killers believe the Big Lie and feel righteous in their revolutionary words and violence. Tax dollars feed most of them and front groups for communists provide buses, signs and T-shirts. The media, the president, and the Democrat Party validate the false premise of Black Lives Matter. Nothing drives this point home more than the Democrat Party inviting the mother of thug Michael Brown to speak at their 2016 Democrat National Convention.

There is no relationship between Selma 1965 and Ferguson 2014. It is 2016! There is no longer black oppression in the United States. Police are good. Criminals are bad. It is not white versus black. It is police versus criminal. It is good versus evil. It is principles versus relativism. It is truth versus deception.

Black males represent 6% of the US population. Within that demographic are some impressive people the likes of Maurice Ashley, Ben Carson, Clarence Thomas, Allen West, Thomas Sowell, Alan Keyes and many more. Also found in that demographic are the most prolific, predatory and violent criminals in the country. That last sentence is not a racist statement, it is the truth:

Narrowing armed assaults on police to those attacks involving guns and knives alone the number is 32,767 for that ten-year period. This translates to a yearly average of 3,277 officers attacked by guns and knives.

Based on that yearly average the public should expect police to be justified in using deadly force to protect themselves as many times as they are attacked with guns and knives: 3,277/year.

Of the police officers murdered in this manner over the ten-year period, 44.3% of attackers were black males. Yet, black males make up only 6% of the population.

But the gross imbalance is worse than that. Certainly, not all black males are killing almost half of police officers murdered. Their full 6% of the 320 million U.S. population is not taking on the nation’s 800,000 officer population.

If we subtract elderly black males, non-criminal black males and pre-teen black males from the 6% aggregate we would discover the percentage of black males responsible for the 44.3% of police murdered is even more grossly disproportionate than their 6% of the population.

It follows logically from the 44.3% figure that we should expect police to be legally justified in using deadly force 1,452 times/year against those black males who disproportionately attack and/or kill them with guns and knives.

Police use a lot of restraint; so much so that they often put themselves at a disadvantage fearing their administration and the DOJ more than the (black) attacker. 800,000 police officers representing 18,000 agencies kill 429 people a year. 316 are non-black. 113 of them are black. Police shoot and kill far more whites than blacks even though blacks commit half of all violent crime and almost half of felonious attacks on police.

Blacks are not disproportionately contacted by police or incarcerated due to racism. They are contacted, detained, arrested, prosecuted and imprisoned in direct proportion to the number of times that their behavior and evidence points police to them as the suspects of some level of crime.

Let’s continue to break the Big Lie down with more sobering facts.

Yearly, black males rape 37,000 white women (100/day). Conversely, there are ZERO black women raped by white men year after year. In 2005 there were 37,460 black-on white rapes. Where is the outrage? Where is the DOJ’s task force? Where are the media? Where is Oprah? Where is the National Organization for Women? In prison white males are the preferred victims of rape by black and Hispanic offenders; still no outrage. Then there is the under-reported “knockout game” (AKA Polar bear hunting) where black males sucker punch whites and beat them unconscious or worse. Are Loretta Lynch, Eric Holder and Obama of the opinion that these white victims have it coming? Did Reverend Jeremiah Wright’s chickens come home to roost? Do we write off this pattern of violence against whites as a reckoning at the altar of social justice?

93% of blacks murdered are killed by other blacks. A full 50% of white and Asian murder victims are killed by blacks. White-on-black murder from 1995 thru 2002 totaled *1,676. During this span of time black-on-white murder totaled 4,044. (*It is significant to note that Hispanics are tallied as white when they are offenders and non-white when they are victims ─- thereby inflating “white” offender numbers.) Blacks are 22 times more likely to kill whites than “whites” are to kill blacks. The FBI in 2012 found that of the 2,648 black murder victims, some 2,412 were killed by fellow blacks and only 193 by “whites.” Black neighborhoods desperately need the police more than anywhere. Law abiding black people appreciate proactive police officers in their neighborhood. What they are going to get instead is reactive, armed report takers. Crime will go up even more. The job pays just as much being reactive and you get fewer complaints.

Police are not the Klan in blue. Earnest efforts to diversify the ranks of police continue, but few blacks choose the profession or can qualify for the honor of wearing a badge.

Why do Obama and the media discredit local police and stoke civil unrest across the country? The end game is to grow a larger federal footprint in local policing and the eventual building of a “Civilian National Security Force” of the kind our dear leader alluded to on July 2, 2008 while campaigning in Colorado Springs. He said, “We cannot continue to rely on our military in order to achieve the national security objectives we’ve set. We’ve got to have a civilian national security force that’s just as powerful, just as strong, just as well-funded.”

All totalitarian regimes have internal security forces. Ancient Rome had its Praetorian Guard. The Soviet Union had the thuggish, militarized and deadly MVD.

Already there are 30 police departments under DOJ consent decrees. When federalization occurs the media will give police a facelift. They will be shown in a new light, more racially diverse than ever and champions of social justice and a forcibly realigned America. The new police will react to false flags. They will provoke and crush dissent and rebellion from the corners of yesterday (TEA Party groups, Oath Keepers, gun owners, the CSPOA, etc.). When police finish with them they will turn on a dime and target with real brutality the useful idiots whose false grievances ushered in the police state. The most ardent supporters of a revolution are always considered the greatest threat to the new regime.

Police are not perfect. I am the first to advocate that someone must police the police. For the most part police do a good job screening applicants and ousting bad apples. Bad cops do exist (of every race) and they are the exception to the rule. The rare and true instances of criminal police conduct do not retroactively validate the premise of the terrorist group, Black Lives Matter. For the vast majority of police  ̶ be they black, white, male, female, heterosexual, homosexual, Christian, agnostic etc. their oath trumps their prejudices and they serve honorably risking life and limb to protect and serve whoever calls 911. They have a heart for public service.

We must fight the Big Lie on behalf of our police. They can’t fight this enemy. Their mouths are wired shut by political correctness. Be their voice! Otherwise, their murders will continue and an unaccountable, federalized police force will fill the vacuum augmented by a national security force and even the UN as a force multiplier. We will be living under true police brutality and corruption versus the myths and exaggerations advanced today from the race baiting, Marxist community organizer defiling the Oval Office.

Doug Traubel is a veteran lawman and author of Red Badge, A Veteran Peace Officer’s Commentary on the Marxist Subversion of American Law Enforcement & Culture 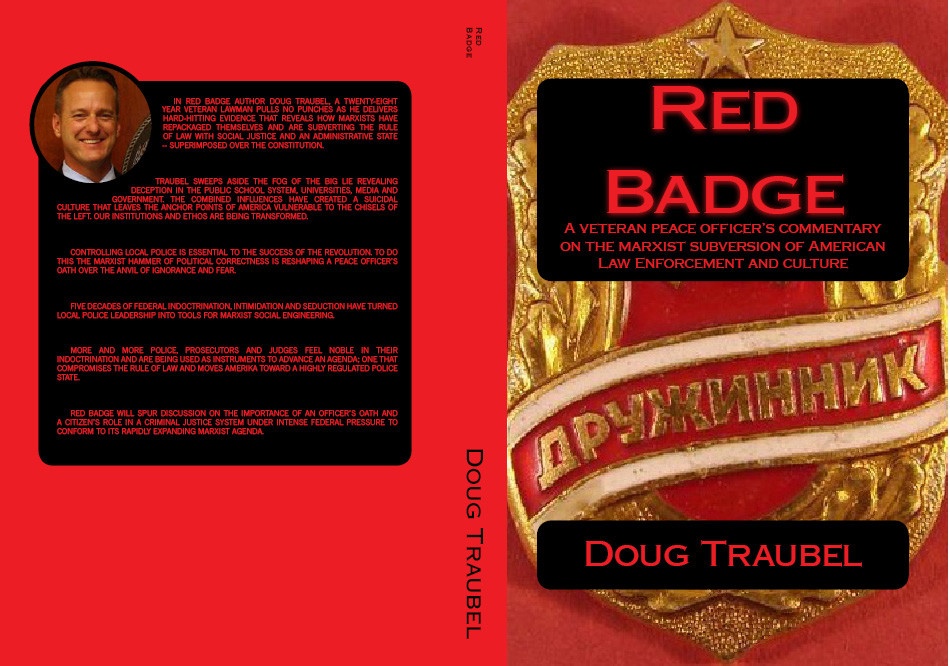