As most of you know, I have been following the political arena for many years and my mantra is if you want to know why something is happening in government, just follow the money.

While we would all like to think that our elected officials are working for us if we do a little digging in most cases you will find that most everything they do is for themselves or for the lobbyists that paid to get them elected. Let’s take a look at some of the bills our legislature will be deciding on that are currently in committee or being voted on to get an idea of what I’m talking about.

Rep. Priscilla Giddings is one of our very conservative legislators who also likes to follow the money and we have taken a few excerpts out of her latest legislative update to give you some examples of the lobbyists’ influence on spending. The following are Giddings’ Budget Bummers:

“We all know that money has influence, even more so in state government. During this session, I will track the money and keep you informed about budget concerns.”

$ JFAC approved an extra $240,000 for the Soil and Water Conservation budget even though neither the agency nor the governor requested the extra money. When I asked to add $30,000 to the military division to help support training of the Civil Air Patrol, that increase was rejected because “the governor did not request it”.

$ JFAC did not approve my motion to stop taxpayer money from supporting biased, partisan content on Idaho Public Television. The full budget request will go to the House for a vote next week.

$ There is $2,557,941 of taxpayer money going to Idaho’s four public colleges and universities specifically to advance critical race theory and the “social justice” ideology. These programs include things like implicit bias and skewed anti-racism training for faculty members, bureaucracies that discriminate against students based on sex and race, and programs to encourage students to participate in exclusively left-wing activism. Overall, at least $20,456,534 has been identified to support the massive social justice infrastructure built by these institutions. 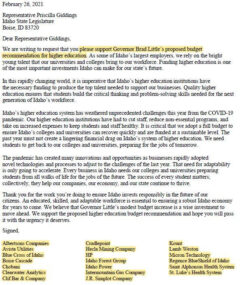 It is interesting that a letter was sent to Rep. Giddings about supporting the Governor’s budget for our colleges and it was signed by 20 of Idaho’s largest and most influential corporations. These include Hewlett Packard and Micron both of who are members of the World Economic Forum. Click on the letter to read it. You should note that we surmise that all of these companies are members of IACI. While several of these big businesses are asking for our legislators to support these institutions radical policies Rep. Giddings is asking if you the people what to support this dark money? My question is do we need to support indoctrination to social justice or should we be teaching our students job-related skills?

Let us not forget the largest emergency supplemental appropriation which happens to be the largest in our history to cover $369 million in unanticipated Medicaid expenses from last year. If you want to know why we are not getting a repeal of the grocery tax or a substantial decrease in property taxes this is one of the reasons. Even though the surplus of tax money still in the kitty amounts to over $700 million don’t look for our RINO legislators to do anything to help the people who pay the taxes especially those in the lower income brackets.

We warned on the Kevin Miller Show Last week that Governor Chicken Little was looking at raising the gas tax 4 cents a gallon which would bring it to 32 cents per gallon. So the lower income people get a double whammy if this gets through as food, gas housing the three primary things that lower bracket earners spend their incomes on. On top of that, the current tax proposal would actually increase the tax on a family of four earning $75,000 a year or less while any change in property taxes will be a one-time affair and not really significant.

As you can plainly see folks too many of our legislators are not looking out for your welfare but instead are taking care once again of the lobbyists who keep the RINOs like Bedke and Little in office.

Just one more thing we would like to bring up. Representative Priscilla Giddings’ bill H140, is an attempt to stop some instances of mandatory vaccinations that would be required by businesses as a prerequisite for employment. This bill not only has implications for our constitutional rights to decide for ourselves what goes into our bodies but if corporations are permitted to do this the government would more than likely claim the same right. If we allow corporations the ability to dictate what their employees must put into their bodies to be employed this starts to tear down our constitutional right as individuals to make that decision especially on grounds of religious beliefs. If herd immunity is within reach and more than half of the people in the country will soon be vaccinated there is little chance of the virus spreading. A requirement of this magnitude could only be used as leverage on employees and if they get this through who knows what they will ask for next. Keep an eye on what happens in the senate commerce and human resources committee on this bill to see if they give it a hearing or kill it in committee. My bet is they will not let it out of committee or if by some miracle it does they will kill it in a vote by the senate RINOs.

The senate is composed of the worst of Idaho’s RINOs. You only have to look at The Club for Growth’s Economic Score Card for Idaho listing those state senators who are voting for the people and those who are voting for the lobbyists. Here: Every Idahoan should read this list and find out just where your senator is on this list when it comes to your economic security and growth. You should also look at the list of Idaho’s Representatives and how they rate.

“We Get the Government We Deserve”

NOTHING WILL CHANGE IN CONGRESS, UNTIL THE MONEY IS TAKEN OUT OF CAMPAIGNING

As long as candidates need someone else’s money to run, THE WEALTHY WILL ALWAYS WIN, because they donate the most to candidates. The candidates who win, have to do whaT they are told by the wealthy, or they do not get any more money from the wealthy.

A way of campaigning that forbids spending any money needs to be created. One such way would be a debate system, and the winner of each debate would go on to the next one, until a winner is declared in each state, then they go on to the federal debates. There could be a better way, but the way we have right now is an AUCTION HOUSE for the wealthy to BUY A CANDIDATE.

EVERY candidate in EVERY city, county, state, and federal election should have to win by a 50% plus one vote. Too many politicians win because there are too many candidates running, and whoever gets the most votes, wins, and they do not need to have most of the votes. Most of the presidents were elected with LESS THAN HALF OF THE VOTES. This means MOST OF THE PEOPLE DID NOT WANT THEM.