The words of Daniel Webster ring as true today as they did over 150 years ago: “Hold on, my friends, to the Constitution and to the Republic for which it stands. Miracles do not cluster and what has happened once in 6,000 years, may not happen again. Hold on to the Constitution, for if the American Constitution should fail, there will be anarchy throughout the world. We must hold fast to the miracle that is our Constitution and our republic; we must not submit our constitutional freedoms, and the promise of our nation, to judicial tyranny.”

Although our nation is not currently under military attack like the Nazi onslaught against Great Britain, our sacred Constitution is under such ferocious attacks on so many fronts, the courts, big media, congress, executive branch, government agencies and by our education system it is overwhelming.

Here are some very relevant reflections from another, different time, for our time; some inspirational quotes from one of the greatest men of courage, conviction and enlightenment of all times, Sir Winston Churchill:

“Do not let us speak of darker days; let us rather speak of sterner days. These are not dark days; these are great days—the greatest days our country has ever lived; and we must all thank God that we have been allowed, each of us according to our stations, to play a part in making these days memorable in the history of our race.”

“You have enemies? Good. That means you’ve stood up for something, sometime in your life.”

“We shall go forward together. The road upwards is stony. There are upon our journey dark and dangerous valleys through which we have to make and fight our way. But it is sure and certain that if we persevere – and we shall persevere – we shall come through these dark and dangerous valleys into a sunlight broader and more genial and more lasting than mankind has ever known.” 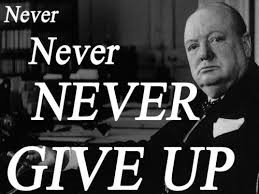 “No Socialist Government conducting the entire life and industry of the country could afford to allow free, sharp, or violently worded expressions of public discontent. They would have to fall back on some form of Gestapo, no doubt very humanely directed in the first instance.”

“The day may dawn when fair play, love for one’s fellow men, respect for justice and freedom, will enable tormented generations to march forth serene and triumphant from the hideous epoch in which we have to dwell. Meanwhile, never flinch, never weary, never despair.” — Unquote Winston Churchill

So it is not over till it is over! Overwhelming, is the word I think of and hear the most from others when the unending, multitudes of troubled issues of our day are discussed. And our being overwhelmed is not by happenstance, it most certainly is by a design to wear us down into submission by the ‘Establishment.’ It matters not the depth of our besiegement, all that matters is our resolve and focus. We must awaken, get educated and get involved by informing others, or the United States of America as we’ve known our sovereign republic to be, will be no more. It is as simple as that. We either do this or we are dissolved. Do you want to be told what to do constantly by unaccountable, unelected global power elitists who know best for you about everything?

World Government socialism demands big government and has for far too long been about balancing social mores, establishing equality and even guarantees for individuals and commerce through government programs. The more programs the more power they expropriate. Socialism has never succeeded as a government and socialist provocateurs keep making the same mistakes in the face of all their existing failures. If what they are doing is not about power and world domination then they have exhibited the true mark of insanity by continuing the same stupid stuff repeatedly: Government hand-outs are dis-incentivizing people to work • subsidies and bailouts are unbalancing the free market • 30 hour work weeks are forcing people to get 2nd jobs falsely propping up job reports • overburdening regulations, high taxes and poor and deceitfully contrived fair trade laws are forcing layoffs as well as closing businesses • and the sheer weight of constant bad news and outright lies trumpeted by the sorry ultra-liberal media supporting the establishment’s agenda. All this and much more is overwhelmingly taking its toll on citizens’ faith in the people we have elected in both parties who are part and parcel to it all.

American patriots must study issues, inform others, follow the Freedom Indexes for the U.S. Congress at The Freedom Index at JBS.org: and for the state of Idaho at IdahoFreedomIndex.com and fire elected officials who are not following our rule of law through the Constitution. There is no other way to right our absolute mess. Presidents, congressmen, senators and governors created this boondoggle we have and they must pay for it by being replaced at the ballot box, ending their political careers and being replaced with real accountable patriots who understand the Constitution and take their oaths to it seriously. They need to know we are watching. Be damned with the Establishment! See CFR membership roster. Some of the names will surprise you and tick you off.

“So that the record of history is absolutely crystal clear, there is no alternative way so far discovered of improving the lot of the ordinary people that can hold a candle to the productive activities that are unleashed by the free-enterprise system.” — Milton Friedman