Should your organization be looking for an event speaker with a message everyone in America should hear and isn’t, you should become aware of an impressive and very informative woman from Ronan, Montana named Elaine Willman. She will hold attention and elicit a lot of note taking and questions on how our federal government is blatantly dismantling our United States. Rarely, do I get to hear someone, with the depth of information and command of memory for facts and details like she possesses. Please read her impressive article in this issue of GSP “Will the United States Go the Way of Zimbabwe? ”

Elaine Willman is of Cherokee ancestry, and has adopted a lifetime study of the federal Indian policies as a result of a working career as a public employee where she applied her MPA (master’s degree in public service).

She spent her first years as an assistant to the manager in a little community down in Ventura County, CA named Ojai, then a couple years as City Development Director for Toppenish, WA in the Yakima Indian Reservation working closely with the tribe, after which she became an independent planning consultant working with many of the 14 towns in the reservation as well as the tribe before accepting the position as Director of Community Development and Tribal Affairs for Hobart Village, Wisconsin.

In Hobart, Elaine made an impressive video explaining how their tribe chose to turn their reservation into individual allotments, then later the government decided to reestablish their reservation boundaries. She was instrumental in saving the town from tax exempt tribal land acquisitions: Land Jurisdiction in the Village of Hobart, YouTube 6/16/15.

She also served as Chairman of the Citizens Equal Rights Alliance from 2002 to 2007 and remains on the board today as spokesman.

Her bio on Amazon states “Willman has lived on three Indian reservations for more than twenty-five years, and has extensive knowledge about federal and tribal government decisions, land use status within Indian reservations, dual-jurisdictions and Constitutional conflicts that impact the rights and lives of tribal members as well as other American citizens.

“Willman’s mother and grandmother were enrolled Cherokee members; her spouse is of Shoshone ancestry and a direct descendant of Sacajawea. Willman is engaged with numerous national and local educational organizations providing sunshine on the little known subject of federal Indian policy to inform the general public.”

ANSWERING THE ‘CALL’ IN MONTANA

On the heels of Montana’s approval of the Confederated Salish and Kootenai Tribes (CSKT) and State of Montana water compact Elaine moved to Ronan, Montana to continue the fight against the agreement. In July 2015 – she explained that she was relocating because the compact was a United Nations influenced effort to institute socialism in the state, amounting to “The Revolutionary War for citizens of Montana.”

The New American’s Alex Newman wrote that, “The implications of the [CSKT-State of Montana compact] fight are so serious that she moved to the area in an effort to defend liberty and the rights of besieged Eastern Montanans.” In May 2015 the Concerned Citizens of NW Montana declared, “We, the Concerned Citizens of NW Montana, wish to fund Elaine Willman’s move to Montana. She has agreed to the move.” Willman stated, “I became convinced that the CSKT Compact is a template for federalizing all state waters and implementing communalism and socialism consistent with Agenda 21 and that it is intentionally aligned to spread tribalism as a governing system while eliminating State authority and duty to protect its citizenry. It is my belief that Montana is Ground Zero for test-driving this model in a highly-prized state of small population. I so seriously believe this peril is a fight worth fighting that I have walked away from an excellent employer and moved my family, household, and consulting business to Ronan, Montana.”

As the back of the book, “Going to Pieces… The Dismantling of the United States of America,” which she wrote after the trip states “The authors searched, confirmed, and compiled reports of those who have been victimized or threatened by the spread of tribalism, demonstrating the catastrophic consequences of federal Indian policies that, more often than not, ignore and trample upon the constitutional protections of tribal members and millions of other citizens.” See the overview of her book below.

Elaine wishes to impart her information to as many Americans as possible and is willing to come speak to your groups with no honorarium fee required, however, she sometimes needs help with gas and motels depending on the distance. Elaine’s daughter Wendy Davis, MBA is chief operating officer of Willman-Davis Intergovernmental Resource Services and assists her with her schedule. Contact them at DavisWendyL@aol.com or call 406 359-8160.

Going to Pieces… The Dismantling of the United States of America

An exposé of the price America pays to maintain tribal sovereignty 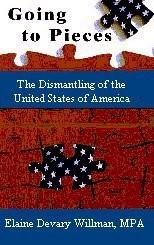 Did you know… that at least 90 major public spaces and natural resources, including Redwood National Monument (CA) and Joshua Tree National Monument (CA), are targeted by the Department of the Interior, the Bureau of Land Management, the Bureau of Reclamation, the National Park Service and U.S. Fish and Wildlife, to be turned over to Indian tribes? The list includes: 41 national refuges; 34 national parks, wildlife refuges and hatcheries; and 15 regional water projects. In each instance, a tribe will take over the management of these public lands. The problem is, tribal activity rarely involves any public process, oversight or transparency. And as can be seen in the areas where tribes have taken over or been given oversight of public lands, public access will most likely be limited. And the tribes won’t pay for the management of the site; the taxpayers will.

Did you know… that one Montana tribe of 5,130 people had, in 2004, an annual Operational Management Budget of $373 million, which is funded not by a casino, but by federal and state assistance? This annual budget is larger than the budget for U.S. Fish and Wildlife’s annual budget for the entire country.

Did you know… that in some areas of the country, you must obtain a tribal hunting permit as well as a state permit to hunt on your own private property?

Did you know… that six months after the destruction of the Twin Towers, a Washington State tribe hosted “civic journalists” from Algeria, Morocco, Qatar, Syria, Tunisia and Yemen? The reservation in question is bounded “…on the East by the Hanford Nuclear site; on the South…(by) the Umatilla Chemical Weapons Storage Facility; on the West…(by) the Yakima Military Training Center; and on the North …(by) several major dams including the Grand Coulee Dam….” , dams which many Northwest tribes have openly admitted they want to see removed.

Did you know… that federal Indian policy is TOP SECRET, developed behind closed doors between the federal government and the tribe, with no public process or transparency? That even tribal members are often left in the dark about what their own tribal government is doing?

These are just a few examples of how flawed federal policy is creating what some are calling the “Balkanization” of the United States. You can read all this and more in the new book by Elaine Willman – of Cherokee ancestry on both sides of her family – and Kamie Biehl, descendant of Paiute Indian ancestry, called:

Going to Pieces: The Dismantling of the United States of America.

At great risk to themselves – make no mistake, people have been killed over these matters – the authors traveled from the West Coast to the East Coast to chronicle the reports of “…police brutality, murders, oppression, homeland security concerns, political corruption and the loss of basic human rights resulting from the aggressive expansion of tribalism in America….”

Folks, this book is a must-read!

For individual orders or discounts on group or bulk orders for the book, email Elaine.

Ask about her soon to be released new book “Slumbering Thunder,” a primer for confronting the spread of federal Indian policy and tribalism overwhelming America.