Civil forfeiture is a process by which the government can take and sell your property without ever convicting, or even charging, you with a crime and that leads to one of the greatest threats to property rights in the nation today. Civil forfeiture is a legal bunch of fiction that tries inanimate objects for their involvement with criminal activity; in other words it is a pretend thing. Civil forfeiture actions are in Latin terminology “in rem proceedings”, which means “power about or against ‘the thing”

Silly in my opinion, but quite frightening.

In most jurisdictions law enforcement can keep some or all of the proceeds from civil forfeiture thus they have incentive to seize and to keep as much property as they can get away with. The U.S. Constitution requires law enforcement official which means both police and the prosecutor to administer the law fairly and impartially but many times this is a joke. The danger of Civil forfeiture transforms law enforcement priorities away from this goal and instead focuses on the pursuit of profit instead.

The $1.7 billion which was collected by local governments became part of a $2.5 billion total which came from “61,998 cash seizures made on highways and elsewhere since 9/11 without search warrants or indictments.” The remaining balance of the $800 million was divided among the departments of Justice, Homeland Security plus other federal agencies; none of which turned that money down I am sure.

Here are four ways that civil forfeiture stacks the deck against property owners:

Not surprisingly most law enforcement agencies ignore their legal duties because no one holds them accountable. Thus they attempt to keep their ill-gotten booty in hopes no one knows, understands or will fight for their rights to get their property back. 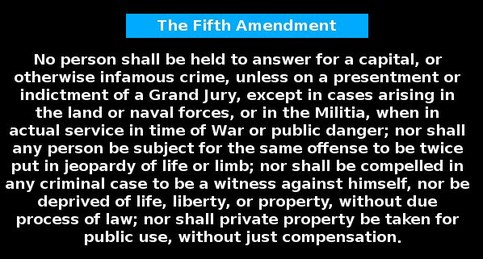 This controversial law enforcement practice known as civil asset forfeiture has let the police seize and keep cash and property from people who are never convicted and in many cases are never even charged with a crime.

I will cite four cases for you to ponder and understand what this is and does.

In Case Number One a drug task force is involved.
The Institute for Justice is representing a college student. The drug task force seized $11,000 from a college student at an airport and all because his luggage smelled like pot. Of course they lacked evidence to charge him with any but decided to make the decision to keep the money and divvy it up between 13 different law enforcement agencies. Of course most had nothing to do with the actual seizure of cash but that did not matter. Hey, could we seize most politicians’ salary with the using civil forfeiture? We have lots of evidence against most of them and they have a lot more money than $11,000.

In Case Number Two the IRS is involved.
The IRS emptied the whole bank account of a convenience store owner and all because they suspected he was depositing cash in such a manner to avoid reporting requirements for those large deposits. He eventually won his money back after a long court fight. Could we use civil forfeiture against the IRS? You bet! There is much criminal activity in that institution and I along with many taxpayers could use their ill-gotten gains!

In Case Number Three the IRS struck again.
Alireza Yarahmadi who is a neurologist at Mercy Medical Center in Mason City, Iowa, has helped patients with epilepsy, sleep disorders and strokes. Now he is more than a neurologist because he has a new addition to his list of experiences. He is a civil forfeiture victim. Not something one would wish to brag about however last June the IRS took $344,405 from his account. Their accusation was that frequently had withdrawn cash in amounts under $10,000 to stash in safety deposit boxes. Oh my, such a naughty boy! Since banks have to report cash transactions of $10,000 or more and because it’s against federal law to “structure” deposits in amounts under that $10,000 for the purpose of supposedly evading that reporting requirement they would have reported it. The “Institute for Justice began representing innocent entrepreneurs from abusive seizures in two cases, the IRS announced a new policy, claiming it would “no longer pursue the seizure and forfeiture of funds associated solely with ‘legal source’ structuring cases,” i.e. money that was lawfully obtained. During a congressional hearing last week, the IRS Commissioner even apologized to “anyone who got caught up in this.” Obviously since he denied structuring and this new policy is now in effect his smart attorney urged the case be dropped which we are all happy that on Feb. 3, 2015, a federal judge dismissed the civil forfeiture case against Mr. Yarahmadi’s cash.

In Case number Four we have a personal story.
A sheriff was involved as was my son who was coming from N. Dakota where he worked in the oil field during the boom. Montana has always allowed you to travel at a high rate of speed. My son entered Idaho and forgot to take his foot off the pedal and slow down. Of course the police officer caught that and since my son had seen the sheriff he pulled over and waited for the nice officer to catch up to him. The sheriff of course asked for the usual demands of insurance, registration, license and all that. My son complied and then the officer asked, “Do you have any cash”? My son said, “Yes but it is in my bank account! I probably make more money than you do as I work in the oil fields.” The sheriff explained to him they were looking for money and drugs because although drugs are always something they look for if they are suspicious, the oil field run to N. Dakota was causing people to take drugs there and sometimes back. My son told him, “Go ahead and search my car!” The sheriff did not do so nor did he give him a speeding ticket; luckily for my son. I guess the officer wanted him to move along so they could look for bigger fish to fry as there was nothing for him to gain but a ticket handed out. I wonder if the sheriff even cared about the ticket being as he had him on his radar for going over the speed limit. Seems cash was the ultimate goal.

Turnabout is fair play or as my Mother use to say, “What is sauce for the goose is sauce for the gander”. This phrase means, “What’s good for one person or thing (of any or no gender) is good for another.” I think anyone reading this knows what this means in the application to politicians, IRS, and the police. 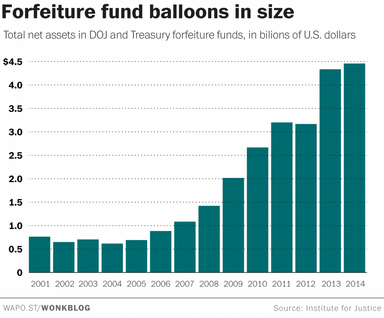 But, I digress as “Once property is seized,” the co-authored Carpenter report explains, “owners must navigate a confusing, complex and often expensive legal process to try to win it back.” In Illinois, as an example in order to challenge a seizure the poor property owners must pay a bond of up to 10 percent of the property’s value. If they lose this challenge the full legal cost of the proceedings rests on them. “Even if they win, they lose 10 percent of the bond on top of whatever attorney costs they accrued,” the report found. Disgusting! According to Dick Carpenter in a report, “years 2008 to 2014 were some lean economic years,” “Forfeiture is an attractive way to keep revenue streams flowing when budgets are tight.” Law enforcement officers have generally said that this is true according a Washington Post investigation last year: “All of our home towns are sitting on a tax-liberating gold mine,” Deputy Ron Hain of Kane County, Ill.

“Those laws were meant to take a guy out for selling $1 million in cocaine or who was trying to launder large amounts of money,” said Mark Overton, the police chief in Bal Harbour, Fla., who once oversaw a federal drug task force in South Florida. “It was never meant for a street cop to take a few thousand dollars from a driver by the side of the road.”

Our police departments have used civil forfeiture to benefit their bottom lines. This makes for seizures that are motivated by profit rather than true crime-fighting. For the people whose property has been seized through civil asset forfeiture the process of legally regaining such property is notoriously difficult and expensive. Sometimes the cost exceeds the value of the property so the true motivation at that point is to make a point and not allow them to get away with stealing from you.

The below video is true but presented very funny in its own way!

From renting Cadillac, Zamboni’s, Parties, Margarita Machines, to Kegs with liquor and Casinos they spend that money on things they do not need. Here is the link to that article…

The value of property seized under civil forfeiture laws, includes cars, homes, boats, electronics, jewelry, and other property. This increased nearly tenfold from $407 million nationwide in 2001 to $4.3 billion in 2012. We have to stop this theft which is made worse by knowing that many times it is used for frivolous stuff. Over that time period, police have seized $2.5 billion in cash alone from almost 62,000 people without warrants or indictments. This is according to an investigation by the Washington Post.