“There is nothing more reliable than someone whose loyalty can be bought for hard cash.” Boris Balkan, the antagonist in the film, The Ninth Gate,

With all of the discussion taking place on immigration these days, thanks in no small part to presidential candidate, Donald Trump, it is appropriate to compare the actions in this regard of three of America’s governors.

In a recent letter to Barrack Hussein Obama, Texas Governor Greg Abbott stated, “I write to inform you that the State of Texas will not accept any refugees from Syria in the wake of the deadly terrorist attack in Paris.” Furthermore, Gov. Abbott states, “I am directing the Texas Health and Human Services not to participate in the resettlement of Syrian refugees in the State of Texas.” [emphasis mine]

Contrast the leadership evident in the words of Gov. Greg Abbott with those of Idaho’s Governor, Butch Otter. While Otter correctly asserts that “frustration with federal immigration and refugee programs runs high in Idaho,” he surrenders with, “I recognize that my authority is limited on this issue, but I will use any legal means available to me to protect the citizens I serve.” [emphasis mine]

In 1989, Governor Cecil B. Andrus closed the Idaho border to nuclear waste shipments that were ordered by the federal government. Andrus’ actions were courageous and commendable and put to shame the inaction of Idaho’s supposed conservative governor. The federal government did not even question Andrus’ authority or contest his actions in any way. Also notable during Andrus’ assertion of the 10th Amendment was the deafening silence of the Left, whose claims of federal superiority are so often heard when state sovereignty is an issue.

At the very least, Governor Otter could use a lesson in negotiating from Donald Trump.

Otter’s response to Obama’s reckless and blatantly pro-Muslim refugee resettlement program is not only weak, it is cowardly. Governor Otter disgraces the Idaho Republican Party with his empty, half hearted attempt to protest Islamic resettlement in Idaho. To be shown a coward when compared to Democratic Governor Cecil Andrus simply adds insult to injury.

Otter’s cowardice is nothing new, however.

When the states were being pressured to adopt Obamacare, Governor Otter was the first Republican governor to capitulate. Otter’s actions were suspicions during the entire Obamacare debate. First he asked the Idaho Legislature for a nullification bill (HB298). Then he vetoes the bill in favor of a State-Based Exchange which turns out to be worse for Idahoans than if we had let the federal government create and manage a federal exchange.

At a Farm Bureau conference in Boise where Governor Otter was the keynote speaker, I personally heard Otter tell a young Farm Bureau member that “Obama could make our life difficult if we nullified Obamacare.”

One must ask, what on earth would cause a supposedly conservative Republican governor to display such cowardice in the face of such unconstitutional and, in many cases treasonous, actions of the federal government? The answer: Cold, hard cash. 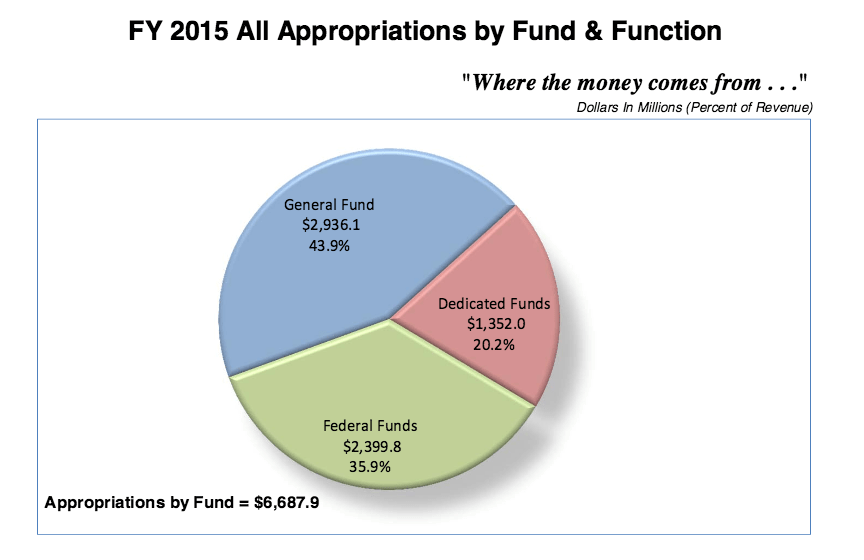 Figure 1: Idaho revenue sources, from the 2016 Legislative Budget Book. Note the percentage of Idaho’s budget that originates with the federal government.

Otter has exacerbated Idaho’s dependence on federal subsidies to the point where they make up about 36% of Idaho’s budget. Of course he is afraid to oppose his puppet masters in D.C. – they will threaten to pull his precious federal subsidies. Otter’s lies about Idaho having a balanced budget will then crash down upon him in the same manner that Samson brought down the temple on the Philistines.

Otter’s behavior in concert with that of cowardly Republican legislators has placed Idahoans in a very dangerous position. With 36% of our budget depending on federal subsidies we are like the drug addict at the mercy of the drug pusher.

HB1 was sold to the public as a child support bill (amendments to the Uniform Interstate Family Support Act) designed to facilitate collection of child support payments internationally. Governor Otter ordered a special session of the Idaho Legislature in order to ramrod passage of HB1. Among other things, HB1 was a truly heinous end run around Article 1, Section 10 of the US Constitution and Article 1, Section 2 & 3 of the Idaho Constitution. It clearly violated the constitutional right to equal protection under the law by subjecting Idahoans to foreign jurisdiction in certain child support disputes.

Passage of HB1 was said to be necessary by our cowardly politicians in order to save a mere $46 million in federal subsidies. That’s right. Your protection under American law was sold for 30 pieces of silver (adjusted for inflation, of course.) Arguments that HB1 was necessary to fund enforcement of child support functions fail when one considers that out of 1,400 child support cases handled in Idaho in 2014, only 97 cases involved foreign countries and of those, 60 involved Canada and Canada is not part of the Hague Treaty. The bottom line is that we sold our sovereignty for $46 million to be used on only 37 child support cases.**

Several legislators (Rep. Heather Scott, Rep. Ronald Nate, Sen. Sheryl Nuxoll, acting Sen. Brent Regan, among others) attempted to reveal the truth about this heinous bill to no avail. In the April 15 edition of the Idaho Statesman*, Rep. Ronald Nate correctly noted that Idaho could clearly afford the loss of the federal subsidy but that we cannot afford to sell off our sovereignty at every threat by the federal government.

The pressure to quickly end a special session and secure a federal subsidy was simply too great for a majority of our elected officials – most of them Republicans – all of them cowards.

Given the Governor Otter’s track record regarding Obamacare and HB1, it is now easy to explain the spinelessness of Idaho’s political leadership.

Whether we’re fighting the EPA or Islamic terrorists, subsidy bills like HB1 are directly responsible for the inability of Idaho’s leadership to defend us against the dangerous policies of the federal government and the Obama Administration in particular.

Governor Otter and his accomplices in the current Legislature cannot be counted to defend our liberty. They have a history complicity in the very offenses we are trying to defend against. With a few notable exceptions, Idaho’s politicians are bought and paid for.

What is the answer?

The only solution to the never ending assault on the Idaho’s sovereignty and our freedom is to take back the 62% of Idaho’s land that is unconstitutionally occupied by the federal government. Tyrants and despots have known throughout recorded history that if you do not control your own land, you are a slave.

Along with the other Western States, Idaho sits on its share of $150 trillion in natural resources. Funding for Idaho’s infrastructure, schools and the day to day operation of constitutional government would no longer be a hostage in the hands of an increasingly unconstitutional and oppressive federal government.

Until Idahoans reclaim the land that belongs to them, we are like a dinghy tethered to the doomed Titanic. Until Idahoans elect legislators that are focused on this issue, we will continue to be serfs, ever cowering before our masters in Washington D.C.

Reclamation of Idaho’s land should be the single issue on every voter’s mind. This issue trumps all others and should be a litmus test for our support of any candidate for public office, from the local school board to the office of governor. Elected officials that do not make this issue their number one priority should be removed from office.

YES votes on HB1. The Hall of Shame.

Courageous Legislators who voted NO.