On April 3, 2018, I published the following open letter to the Executive Board of Spokane GOP:

It has come to my attention that while I was out of the country, a gentleman by the name of William Parks donated an AR-15 rifle for the Spokane Lincoln Day auction. It has also been explained to me that due to pressure from donors and activists, Spokane GOP Executive Board Chairwoman Stephanie Cates announced to the Central Committee that the AR-15 will be banned from the auction.

The Chairwoman declined to discuss the situation with me, but I did talk to several board members and activists who were present at the meeting to try to understand the rationale behind the decision. My understanding is, the arguments fall into three categories:

Folks said that we must be “sensitive” to the feelings of those who associate the scary black gun with school shootings.

They said that we must not hand ammunition to the Democrats in an election year. We mustn’t let Lisa Brown use the AR-15 as a lightning rod to unleash the left’s hysteria against Rep. Cathy McMorris Rodgers.

Some big donors said they won’t attend the Lincoln Day event, and even threatened to withdraw their financial support.

ONE GUN OUT OF MANY?

Those in favor of banning the AR-15 from the auction explained to me that they are strong supporters of the 2nd Amendment. They just don’t want to cause offense. You see, another AR-15 in the hands of a madman cost the lives of 17 people. We must respect the feelings of the families that lost their children. Besides, it’s just one gun out of many — so, no big deal. 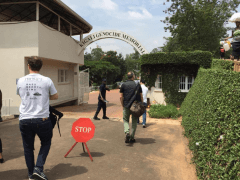 Except it is a big deal, to me. Let me tell you why.

I was not able to attend the March 6th board meeting, because I was in Rwanda. What is the first thing that comes to mind, when you hear “Rwanda”? Most of you are old enough to remember the news reports about the genocide against the Tutsis that took the lives of one million people. Some of you may know the story because you watched “Hotel Rwanda”.

Hours before you debated whether to allow the AR-15 at the Lincoln Day event, I visited the Kigali Genocide Memorial, where the remains of 250,000 victims are buried in mass graves. I’ve read about the genocide; much of the information presented at the memorial was familiar to me. I knew that the majority Hutus driven by racist government propaganda turned on their Tutsi neighbors, and did what was considered impossible: murdered a million people in the space of 100 days. Even though the Hutu militia had plenty of firearms and ammunition, guns were considered a painless means of killing and therefore were rarely used. Most of the victims were killed with machetes, clubs with nails, axes, knives, and poles. Men, women, children, old people were all herded into churches, and set on fire. Some were made to dig their own graves and were buried alive. Others were thrown into cesspits and made to trample each other to death (some of these grotesque “graves” discovered after the genocide, were 10 bodies deep). 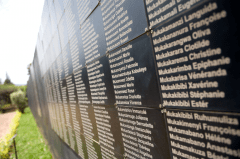 Then I came upon an exhibit that showed a side of this tragedy I wasn’t familiar with. It talked about the people who refused to be slaughtered. Around 50,000 unarmed Tutsi men and boys decided it was better to die with honor, and gathered in the hills of Bisesero. For eight weeks, the starving and desperate Tutsis armed with rocks and spears fought off a far superior advancing force armed with assault rifles, machine guns, and grenade launchers. When it was over, all but 1000 Tutsis perished in the fighting.

By the time I made my way to the children’s memorial, I had to exert considerable effort not to break down sobbing. I have four kids. The oldest is 15, and the youngest is 5. It was hard to look at the photos of the slain Tutsi boys and girls and not to think about my children.

IF ONLY THEY HAD GUNS

One thought kept going through my mind: “If only they had guns!”

This scenario played out multiple times in the 20th century. Armenians in Ottoman Turkey. Ukrainians in the Soviet Union. Jews in Nazi-occupied Europe. Chinese in Communist China. Cambodians in Democratic Kampuchea. Bosnians in Yugoslavia. Millions of people — disarmed, defenseless, murdered.

If only they had guns.

I’m not at all surprised that the Democrats are using the Parkland school shooting to advance their anti-gun agenda. That’s what I expect Democrats to do: it’s their nature to exploit tragedies and to use vulnerable groups as human shields in their attack on our freedoms. 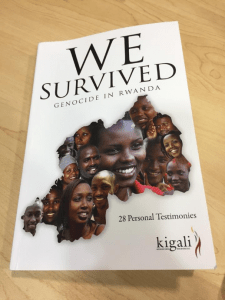 However, I find it appalling that so many of my fellow board members, ostensibly on my side of the gun debate, fall for the left’s dirty tactics and abandon their principles in the name of “sensitivity”. They are afraid to offend those who don’t understand (or don’t want to understand) what was so plain to the Founders of our Republic: an armed citizenry is the only effective defense against a tyrannical government.

I wonder, how come they’re not afraid to offend those who, like myself, believe in the right to keep and bear arms? Why aren’t they concerned about insulting the man who donated (not sold at cost, but donated) the AR-15? Do they believe that the precious feelings of the gun-grabbing snowflakes should be protected at the expense of snubbing the majority of Republicans?

I am appalled at the decision of the Stevens County GOP who capitulated to the demands of the Democrats and announced that they will not raffle off an AR-15 rifle at this year’s Lincoln Day fundraiser. By surrendering the AR-15, Stevens County GOP conceded that the gun (and not the killer) is responsible for the killings. They let the Democrats win the argument by default.

I do not wish to witness a repeat of such shameful display of political cowardice in our county.

It’s not about the gun. It’s about the principle. If Spokane GOP gives up the AR-15 on the grounds that it offends people, what is to stop them from sliding down the slippery slope of appeasement and giving up ALL guns that the liberals find objectionable?

In his book “Confrontational Politics”, Bill Richardson (former Republican state senator from California and the founder of Gun Owners of America) explains that liberals actively seek confrontation as a means of achieving their ends. Meanwhile, the conservatives avoid conflict and seek compromise. The trouble is, when dealing with the liberals, “compromise” is a euphemism for “appeasement”: the left always wins, and the right always loses. They get to advance their social agenda, while we lose our freedoms.

IT IS IMPOSSIBLE TO APPEASE THE LIBERALS

Conservatives must realize, once and for all, that it is impossible to appease the liberals. They are unequivocal about their ultimate goal: to repeal the Second Amendment and ban all citizens from possessing guns. Yielding to their demands only emboldens them.

When our core values are under attack, we shouldn’t be retreating and giving up ground. We should take control of the narrative. We should use the opportunity and the media attention to educate people, to share the facts, to debate, to change minds. History, facts, and logic are on our side.

It is immoral to sell out our principles for money or political advantage. It is backward to think that to win elections, we must compromise our values. We can’t out-Democrat the Democrats. To win, we must stand firm on our Republican platform and not give an inch to the Democrats.

Without exaggeration, we are fighting a war of survival. Thankfully, right now we are able to fight with words and ideas instead of guns and bullets. We can wage our battles in the boardrooms, legislatures, and in the media. If we lose the war of ideas, we will lose the country. And as Ronald Reagan admonished us, “If we lose freedom here, there is no place to escape to. This is the last stand on earth.”

I pray that you will follow your consciences, and do the right thing.

UPDATE: On April 3, 2018, at its regular monthly meeting, the Executive Board of Spokane GOP voted to offer the Armalite Rifle at the 2018 Lincoln Day event. The proceeds from the sale of the rifle will be donated to a non-profit that focuses on suicide prevention.