The following is a short quiz to help you determine whether a particular candidate for Idaho’s First Congressional District is a “true” Republican or a Democrat in disguise (usually referred to as a “RINO” or “Republican In Name Only.)

Would a Republican or Democrat vote for the state exchange and be the only Republican state to embrace Obamacare? Luke Malek did. Malek was working for Heritage Health at the time and Heritage received a six-figure grant as a result of Idaho adopting the health exchange. During the debate, Malek acknowledged he had a conflict of interest but voted to support the exchange anyway.

Would a Republican or Democrat vote for a $94 million-dollar tax increase on fuel and auto registration? (H312 April 10, 2015) Luke Malek did.

Given the fact that Idaho is acknowledged to be a “Republican” state, wouldn’t you expect a Republican legislative representative to have a high Freedom Index from the Idaho Freedom Foundation? Luke Malek has a 43% Freedom Index rating.

Would a Republican or Democrat vote for the state to recognize homosexual unions, aka “marriages“? Luke Malek did. (H425 Jan. 25, 2016) This is despite the fact that Idaho voters struck down the same-sex “marriage” concept 63% to 37% in 2006.

Would a Republican or Democrat vote to allow foreign court judgments to be enforced domestically without appeal? Luke Malek did. (H1 May 18, 2015)

Would a Republican or Democrat vote against repealing the grocery tax? Luke Malek did. ‘Idaho lawmakers back repeal of sales tax on groceries, send bill to Gov. Otter’

Would an Idaho Republican support the duly elected President of the United States? Malek wrote on Twitter (Aug 2015) that Donald Trump “can go straight to hell.” Luke Malek was quoted in the Spokesman Review (Oct 10 2016) “I have never supported him (Donald Trump), and never will.” ‘Malek condemns embarrassing Trump’

47:04 – “We need good policy set in law by Congress to protect this policy [DACA]”
47:45 – “For childhood arrivals, it is important to have a path and I think the policy that is used for that determination [Obama’s DACA] is great.”
48:15 – “A solution could be taking those criteria that are out there that are currently in the Deferred Action program and putting it into statute.”

Are Republicans or Democrats typically endorsed by the very progressive AFL/CIO? Luke Malek and liberal Republican Senator Shawn Keogh were in 2014, along with 52 Democrats. ‘AFL-CIO Backs 51 D’s, Keough, Malek’

Would a Republican or Democrat vote to amend the civil asset forfeiture law? Luke Malek voted against amending the law.

Would a Republican or Democrat vote to restrict your Second Amendment rights? Luke Malek did an interview where he was asked if he would consider gun control, or if he would always vote to expand gun rights. There was a long pause and hesitation by Rep. Malek. He then responded, “Bump stocks are something I would take a look at.” ‘The Scary Part About Today?’

Coeur d’Alene city councilman Dan Gookin had this to say about Luke Malek: 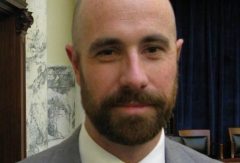 “Here’s who Malek represents, in order of importance to him:
1. Butch Otter
2. House GOP Leadership
3. The local GOP who gets him elected
4. The citizens of his district”

It would appear as though Luke Malek likes to vote for higher taxes. He’s endorsed by labor unions. He really likes Obamacare and DACA. He hates our duly elected President. Hmmmm. Sure seems to be more of a Democrat than a Republican yet he’s running against several “true” Republicans for the First District Congressional seat. Do we really want to send a RINO/Democrat to represent us in Washington DC? I don’t!