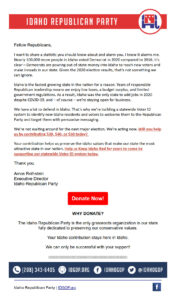 I would like to reply to your message sent to me by Amos Rothstein about the changes in the number of Democratic voters in our last election. This is something I have been aware of for many years but you have all had your heads buried in the sand. How is it that you have just now realized that Idaho is under siege by the left?

To bring up this subject about the need for a voter ID system to identify new Idaho residents is a farce and shows how ignorant you have been of the changes taking place right in front of your noses for 2 decades. If Idahoans liked what the republicans were doing in our state there would not be a problem or worry about the number of democratic voters exercising their rights at the polls. Idaho’s problem is the need to elect real conservatives to our legislature instead of the herd of RINO’s who currently populate our two legislative houses along with our governor.

In the past 20 years, Idaho has changed from a truly conservative environment to one that is run by bureaucrats. They have found it necessary to enact laws that restrict our freedoms and impose more regulations along with higher taxes on its citizens. In other words, we have created our very own swamp with live gators and snakes. Governor Little has bragged many times about how many rules and regulations he has eliminated but what he never tells you is he sat by for 20 years as a senator and Lt. Governor while watching over and voting for the implementation of all those rules and regulations he is so proud to have gotten rid of. Even now while we are still in a state of emergency, he is trying to change even more rules and regulations that will give more power to the bureaucratic RINOs.

Why should any respectable conservative republican donate a penny to keep the RINOs in power when we look at their history? Why did it take over 3 years of hard campaigning by the ISSA alliance to get open carry in Idaho with a supposed conservative republican legislature and governor? Idahoans have been trying to repeal the grocery tax for 4 years with the legislature and governor promising to repeal this onerous tax only to allow the RINO legislative leaders to block and kill its path to approval.

We have seen property taxes rise to ridiculous heights so that people are having to move out of their homes with no effort by the RINO legislature to fix this problem. There is so much more but let’s stop there. The Republican Party in our state is no longer conservative but instead has become a group of moderate liberals who are run by the corporate lobbyists. You have sold out the people who you represent in exchange for the money and influence provided by corporate lobbyists who then ask you to make rules and laws for their benefit. When you are finally overrun by democrats in this state, you might want to take the log out of your eyes. You will understand that it was you who caused this change and it is you who will bear the burden of responsibility when Idaho is run by democrats within the next ten years if you don’t change your ways.

I’m 75 years old and have been a resident of Idaho for the past 29 years. I have covered politics in this state from just about every angle and been involved in many political campaigns, so I do know what I’m talking about. I even ran and was elected a committeeman in district 14/18 three times. The first time I ran against a RINO named Eva Gay Yost who had no real contact with the constituents in her district for years. The real joke was seeing Governor Otter and Lt. Governor Little on TV going door to door in my district trying to help her get elected. Guess what, it didn’t work as the people saw right through the baloney they were selling.

It is no longer enough to have that R in front of your name on a ballot you need to have some real substance in what you have to offer in the form of solutions. I have seen little or nothing from the Herd of RINOs who sit in our capital and pontificate about how they are going to fix all our problems and do absolutely nothing year after year. The people of Idaho have been getting shortchanged and overtaxed for two decades, and I only hope and pray that they wake up and find out what a bunch of phonies they have elected year after year.

I’m hoping that the citizens of our state finally understand that when they go to the polls and see an R next to a candidate’s name it does not mean he or she is a conservative. What it means is that they had enough money to campaign and get on the ballot as a republican. The times they are a-changin’, and if republicans don’t change with them, we will see Idaho become another Washington State, Oregon, or Colorado. Wake up and smell the roses, my friends, before they all die as the corporate lobbyists suck up the very air that we breathe as we get taxed out of our homes and can no longer afford to feed our families.

Op-Ed: Why Red Wave Radio Show Should Raise a Red Flag with Conservatives

Thank you, Bob, you’re “Spot-On.” It’s a disgrace that politicians truly believe that they know more about what is best for us living in beautiful Idaho by attempting to shove their philosophy down our throats. Enough is enough; vote all the Rinos out of office and replace them with true Conservatives who believe in the Constitution!

Go expose them all

As long as we have a campaign system that requires money for candidates to run, the wealthy will be able to buy the candidates at the CONGRESSIONAL AUCTION HOUSE. A system needs to be developed that will allow he ones who should run, to be able to, but they will not sell their votes. A debate system would be one way. Each state would set up a debate system, then the winners go on to the federal debate system.

A law needs to be made that says for a person to run for office in Idaho, or be appointed to a political position, that person, their parents, and their grandparents, will have to have been born in Idaho, or the individual will have to have lived here for 20 years. This would mean they have deep roots in Idaho, and it would keep people from moving here, just to get elected.

Your law requiring a person to be a 20 year resident of Idaho would be a total waste of effort. To the best of my knowledge, the majority of the establishment RINOs have already been in Idaho for 20+ years. The only real solution for the problem is to get people to pull their heads out and get rid of the RINOs in our primaries. And we both know that is not likely to happen. Some may still refer to Idaho as a conservative “Red” State, but sorry to say, it is already “Blue”. And if you don’t believe it, ask yourself one simple question – Why is Idaho still in our scamdemic emergency when the Legislature is in its 6th week of session. Check voting records and one will soon realize that “Red” Idaho has less than 20% of its legislature with true, moral, conservative, Constitutional, Republican values.

Spot on, Gerald. It’s the establishment “native Idahoan” RINOs that are the problem.

Absolutely agree!!! come on Tom and help out the few conservatives still in this state – or else Bob is correct and we will become another CO, WA & OR.