— Published with Permission of AmericanPolicy.org —

In nearly every community of the nation the policy called Sustainable is the catch-all term for local planning programs, from water and energy controls to building codes and traffic planning. The term “sustainable” was first used in the 1987 report called “Our Common Future,’ issued by the United Nations Commission on Environment and Development (UNCED). The term appeared in full force in 1992 in a United Nations initiative called Agenda 21.

According to proponents, the official definition of Sustainable Development is “Development that meets the needs of the present without compromising the ability of future generations to meet their own needs.” In 1993, the UN further described its purpose, saying, “Effective execution of Agenda 21 will require a profound reorientation of all human society, unlike anything the world has ever experienced.” The most often used phrase to describe Sustainable policy is that it’s a “comprehensive blueprint for the reorganization of human society.”

These are strong pronouncements concerning our future. How could such ideas be imposed? Who could coordinate such an effort to reorganize our entire society? There are many private non-governmental organizations (NGOs) and government agencies involved in creating and implementing the national sustainable policy program on the state and local levels. But there is one that seems to stand in the center of them all.

The American Planning Association (APA) is the premier planning group operating across the nation. It has a long history in the development process, thus is trusted by elected officials to be a responsible force as they spread the gospel of “common sense” community planning to assure healthy, happy neighborhoods from which all may benefit. Above all, the APA strenuously denies any connection to the United Nations or any silly conspiracy theories like the so-called Agenda 21! Everything the APA promotes, they assure us, is based on local input for local solutions to local development planning. Here is a solid group you can trust!

So, it’s interesting to note that the American Planning Association is part of the Planners Network. The network is officially run by a group called the Organization of Progressive Planners. According to the Network’s website, it’s “an association of professionals, activists, academics, and students involved in physical, social, economic, and environmental planning in urban and rural areas, who promote fundamental change in our political and economic systems.” 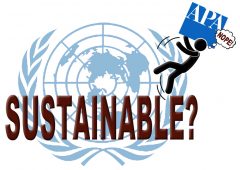 On a visit to the website PlannersNetwork.org, one will find in its Statement of Principles this quote: “We believe planning should be a tool for allocating resources…and eliminating the great inequalities of wealth and power in our society … because the free market has proven incapable of doing this.”

That statement is advocating redistribution of wealth, social justice and even aspects of psychological manipulation, also called social engineering. That, then, is what nearly every planning group in nearly every community advocate in their planning programs. It is clearly the official policy of the American Planning Association. Still the APA insists that its planning has nothing to do with Agenda 21, even though APA’s planning goals are the exact goals of Agenda 21, and its undated version called the 2030Agenda.

Okay, let’s get down to the nitty-gritty. How do planning groups like the APA really control opinions and gain support for their planning ideas? How do they overcome the fears as they impose plans that destroy private property and change the entire structure of the community?

A few years ago, with great fanfare, the American Planning Association (APA) reported results of a survey the group had conducted, “Planning America: Perceptions and Priorities,” showing that the anti-Agenda 21 “crowd is slim.” Said the report, only 6% of those surveyed expressed opposition to Agenda 21, while 9% expressed support for Agenda 21 and 85%, “the vast majority of respondents, don’t know about Agenda 21/2030.”

Typically, APA is using the survey to formulate the image that opponents to Agenda 21/Sustainable Development are just a lunatic fringe with no standing and of no consequence in the “real” world. They continue to portray Agenda 21 as simply a 20- year-old idea, and just a suggestion that planners and local governments might consider.

However, a closer look at the full survey, plus additional APA reports reveal some interesting and, in some cases, astounding facts.

It was designed to show public support for “Planning.” This has become an obsession with the “planning community” because of the growing opposition to Agenda 21 and Sustainable Development.

According to the APA, the findings of the Survey reveal that: only one-third believe their communities are doing enough to address economic situations; it says that very few Americans believe that market forces alone (the free market) improve the economy or encourage job growth; 84 % feel that their community is getting worse or staying the same; community planning is seen as needed by a wide majority of all demographics.

Those are pretty astounding findings. It looks like these “honest” planners have their fingers on the pulse of the nation. Well, not so fast. Let’s look at the actual questions the APA asked to get these results.

For example, Finding #4: Community planning is seen as needed by a wide majority of all demographics (79% agree; 9% disagree; and 12% don’t know). Wow!

But here is the actual question that was asked: “Generally, do you agree or disagree that your community could benefit from a community plan as defined above?” The definition provided in order to answer the question was this: “Community planning is a process that seeks to engage all members of a community to create more prosperous, convenient, equitable, healthy and attractive places for present and future generations.”

Asking the question in that manner is akin to holding up a picture of a rent-a-wreck car, along side one of a Ferrari and asking which one would they want to drive. Give me the pretty one please – say 79%. In fact, in some actual planning meetings they do just that – hold up a picture of the downtown area depicting decaying, dreary buildings versus one of a shining, beautiful utopia, and they literally say, “which one do you want?” If the answer is (of course) the pretty one, then, YES, the community supports planning!

It’s obvious that the APA is playing word games with its surveys and definitions of planning. No wonder such an overwhelming majority answer in the affirmative to such questions. And, yes, maybe a lot of Americans don’t know what Agenda 21 really is. However, if the APA asked real questions that gave a solid clue as to the planning they actually have in mind, it’s fairly certain they would get a much different response – whether the person answering had ever heard of Agenda 21 or not.

For example, listed below are some sample questions that could help the APA take the real pulse of the community – if they wanted to be honest. I challenge the American Planning Association to ask THESE questions in their next survey:

These are the realities of Sustainable Development planning programs, usually under the term Smart Growth. These policies are taking over local governments across the nation and the victims are mounting. Yet the planners ignore these results as they get fat off the federal grants that enforce the Sustainable plans.

Challenge the American Planning Association to stop whitewashing their plans into sounding like innocent, non-intrusive local ideas for community development. Ask the questions so that they reflect the real consequences of the plans, and then see if the 85% now are so eager to ignore the effects of Sustainable Development. The number one truth about the Sustainable policies that the APA imposes on every community is that none of it is LOCAL!

There is only one right approach for a community to come together to discuss and solve common problems: open discussion, honest debates and votes, and above all, a full concentration on the protection of private property rights as the ultimate decider.

This article is taken from information included in Tom DeWeese’s new book, “Sustainable, The WAR on Free Enterprise, Private Property, and Individuals.” Book details and ordering may be found at www.sustainabledevelopment.com